The Beginnings of Transfusions 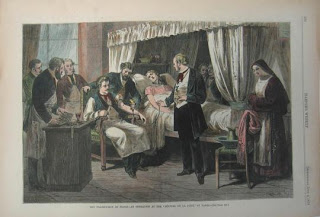 This week I am off to the National Hemophilia Foundation meeting in San Francisco, and I thought an historical look at blood might be in order. I can’t think of a better story about blood than one that starts with a madman running naked through the streets of Paris in the 17th century. True.

Chapter 1 of the wonderful book Blood by Douglas Starr starts with poor Antoine Mauroy, who suffered “phrensies.” From time to time, he would take off his clothes, run through streets and set fires. Eventually, doctors experimented on him to try to cure him. Mauroy became the guinea pig in an experiment that forever changed medicine. In 1667 Jean-Baptitste Denis, physician to king Louis XIV, transfused half a cup of blood from a calf into Mauroy. He hoped the “gentleness” of the calf would infuse as well. Despite the discoveries of the Renaissance and the advances made in science, doctors still believed the blood somehow carried the characteristics of the creature, a concept known as “vitalism.” For example, a stag’s blood carried courage; a calf gentleness. Since the ancient Greeks, the body was not yet viewed as a system, and doctors knew nothing of hormones, genes or viruses. It would be 200 more years before they discovered that water transported disease! In the 17th century, doctors believed that in the “humors”: phlegm, choler, bile, blood. The Greeks believed that good health meant maintaining a balance of the humors in the body, so draining blood and purging digestive system should help. This is where blood-letting as a medical treatment evolved.

Blood– it has a colorful past! And worth reading about. Be sure to read Blood by Douglas Starr. 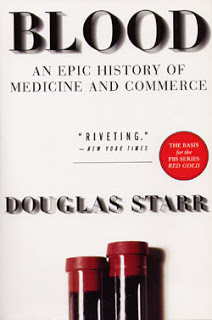 Other doctors and researchers dabbled in finding out the secrets of the blood. William Harvey found valves in blood vessels, which led him to think that the body might be a system, more mechanical. Christopher Wren (the famous architect whose beautiful cathedrals I just glimpsed when I was in London last week) and Robert Boyle, founder of modern chemistry, dabbled in circulation. Richard Lower tried transfusing blood from one dog to another: he discovered how to transfuse from an artery into a vein and it worked.

What happened to our madman? Antoine Maury died from the procedure. What doctors didn’t know is that proteins in the blood from one animal–even from another person– are not always accepted by the body. The immune system may attack the foreign proteins. Dr. Denis was accused of murder. He in turn sued Antoine Mauroy’s widow in 1668 for slandering his reputation. Turns out Mauroy actually died from arsenic poisoning– by his wife! Still, the French Parliament’s banned all transfusions involving humans. Similar actions follow in England and Rome. And 150 years would pass before it was tried again.

The Price of Blood

There is an ever constant debate throughout the worldwide blood community about whether blood donors should be paid or voluntary. There are all kinds of implications. I found the history of blood donation fascinating, as blood developed from a charitable service to a global industry. Here’s a snippet of what I read in Douglas Starr’s excellent and must read book Blood.

In the early 1900s, transfusion of blood was a clumsy, laborious process. No one stored blood in a blood bank. When a patient needed blood, he himself had to find a donor (this must still be the the case in some countries). One day in 1921, Percy Lane Oliver of the British Red Cross got an emergency call to find a donor. He realized this was stressful and inefficient, trying to find random donors when someone was already in trouble. So Oliver decided to create a registry of volunteers. More astonishingly, he ran it from his home! Oliver became a man on a mission, obsessed, and his idea was a stroke of genius. He worked seven days a week, recruiting, filing paperwork, and phoning people. Everything he did was free. His services were in so much demand, he could never get away even for a day. (You can imagine there was so much joy in being able to help when no one else could) Oliver even changed doctors’ practice of slicing open the arm and exposing the vein to insert a needle: all they needed to do was insert a needle now! Eventually, Oliver registered 2500 donors, all of whom were unremunerated. Britain led the way: soon donor panels were started in other countries. Dr. Arnault Tzanck established the Emergency Blood Transfusion Society in France. And he was also an energetic, tireless, and positive thinker. He wrote: “The man is truly poor who does not know how to give.”

Americans adopted the blood transfusion services, too, but were different: remuneration was ok. So paying for blood began in America. And Oliver? The man who created the idea of a registry of blood donors, who worked endlessly, helping to save countless lives, never received any recognition in his lifetime! Thanks to Starr, he is now recognized as revolutionizing blood transfusion services.

(I’m headed for England next week, a country with many medical firsts, especially in any fields related to blood. I’ll blog from there next Sunday)