Laurie Kelley March 13, 2017
It’s hard to know where to begin to discuss what’s happening in healthcare insurance now… and what will become of the advances made with the Affordable Care Act (“Obamacare”). Right now, consider some great advice from a young man with hemophilia who had to fight for what he needed. We might all need to do this if repeals on the ACA are made. (Taken from PEN’s Insurance Pulse newsletter 2015)

Laurie Kelley February 3, 2013
It’s Superbowl Sunday, but take time to read this important press release: while it’s meant only for Kogenate FS users, remember that almost all manufacturers of blood-clotting products have some kind of assistance program. I’ll post them as I hear of them, but don’t hesitate to call your manufacturer to find out what they are doing to help you with insurance!
PSI AND BAYER HEALTHCARE
INTRODUCE A CO-PAY/CO-INSURANCE
ASSISTANCE PROGRAM

Patient Services, Inc. (PSI)
and Bayer HealthCare are pleased to announce the Kogenate® FS
Co-pay/Co-Insurance Assistance Pilot Program. The pilot program is funded by
Bayer to help qualified Kogenate® FS patients with their out-of-pocket
payments.
What is offered through the
pilot program?
PSI will administer and
determine eligibility for the Program to help Kogenate® FS patients afford
their copay/coinsurance expenses.
Patients are qualified to
apply for the pilot program* if they:
· have Hemophilia A.
· meet specific financial criteria for enrollment.
· currently have private
health insurance.
. Who is not eligible for
assistance?
·
Patients on public health insurance, including (but is not limited to) patients insured through Medicare,
Medicaid, TriCare, DOD plans, PCIP programs, and High Risk Plans associated
with a PCIP.
· Patients enrolled in Bayer
Assistance Programs.
Once approved…
·
Financial assistance may be provided for up to 12 months or as long as funding
is available. Funds administered by PSI can only be used towards a patient’s
co-pay/co-insurance expenses for Bayer’s Kogenate® FS.
·
Financial assistance will be based on each patient’s specific health plan
design and annual income, subject to yearly and per payment maximums.
· As a condition of payment,
patients and pharmacies must comply with all contractual obligations made with
Third-Party Payers and insurance companies, and must provide notice of any
benefits received and the value of this program to all payers as required by
law, contract, or otherwise.
For inquiries regarding the Kogenate® FS Co-pay/Co-Insurance Assistance
Pilot Program, please contact Bayer’s Factor Solutions at 1-800-288-8374.
Please remember that applications will be processed and patients will be
enrolled on a first-come, first-served basis. Program may be cancelled or
changed at any time without notice.
Interesting Book I Just Read
Ice Balloon: S. A. Andree and the Heroic Age of Arctic Exploration by Alec Wilkinson [Kindle] 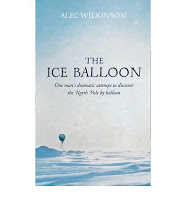 The story of S. A. Andrée, the visionary Swedish aeronaut who, in 1897, during the age of Arctic exploration, convinced donors to fund an attempt to be the first to discover the North Pole by flying to it in a hydrogen balloon. The book is an easy read, and covers the history of Arctic exploration, failed attempts to reach the pole, a glimpse into Andrée’s past and makeup, his reasons for being obsessed with attempting this, despite many misgivings by experts. If you are new to readings about polar exploration you will love this adventure book. Learning about balloons, how they are handled and how they stocked it for a long haul trip was fascinating! But… the book is a mixed bag. I have been studying polar exploration for over a decade and have an extensive collection of biographies and books. So for me, this book was a bit fluffy: the writing was good, but there was a lot of filler. Six chapters alone were spent on an unrelated story about the Greeley expedition, I guess just to show how tough it can be in the Arctic? But it was disconnected to the rest of the story, and you’d be better off reading Ghosts of Cape Sabine, which is superb reading about the Greeley expedition (which is now legendary). I am glad Andrée’s story was told, but honestly, there isn’t much to his story. He went up, he came down, and his diaries, terse and factual, left little information on what happened. A lot of the book consists on just quoting directly from the diaries. This books gets mixed reviews on Amazon.com. It’s definitely worth reading, but it could have been better. Two/five stars.