I thought my life’s work was
complete at age 33 when my book Raising a
Child was published. It took eight solid months of grinding work, not
helped by the fact that there was no Internet, or decent word processing software
in 1990. I actually had one of the first Apple computers, with a whopping 128 MB
of memory!** And now I had a full-time job as an economist, a three year old
with hemophilia and a darling newborn daughter!

But life had other plans. A
mom from North Carolina, Sybil, wrote to me (and I mean wrote, like a paper
letter; no emails for us then!) a wish: wouldn’t it be nice if we could somehow
keep the exchange of parental stories going? Like in the book, which included
the quotes of 120 different families with hemophilia. It was the first time in
history that families with hemophilia could read all about their disorder and
share in the experiences of other families. 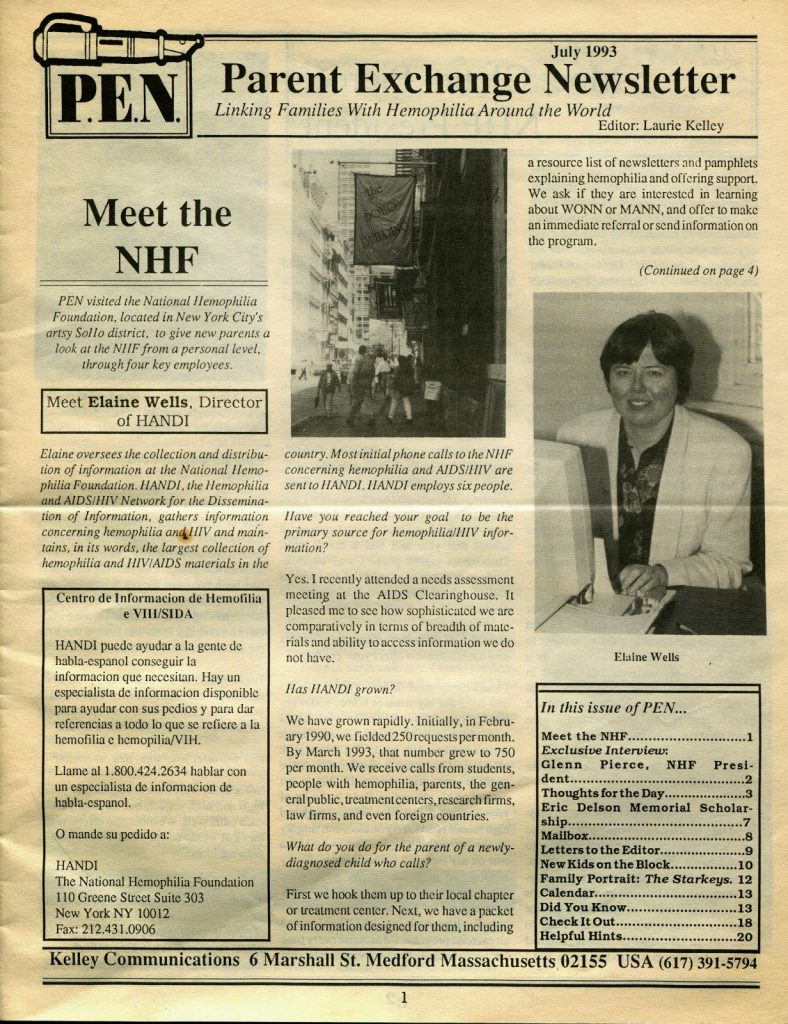 Sybil thought a newsletter
could keep the stories going. Great idea. But how?

At the same time, a woman
named Mary Ann Barth, a cofounder of Quantum Health Resources, the homecare
company that shipped my son’s factor, got a copy of my book. She like it so
much she called me and asked if Quantum could support some initiative of mine. Perhaps
another book? Of course, Quantum wanted to put its name and logo on such a book,
the way Armour Pharmaceutical did. And why not? These companies paid for the research,
writing and publication. We then gave
away the book. No royalties; no one profited. All the companies asked for
was to have their logos on the covers as an acknowledgement.
I’m a businessperson, and I
got it. It made sense. Like Nikon sponsoring the Olympics. Happens all the
time.
I suggested a newsletter to
Mary Ann (not yet knowing how I would accomplish this) and she happily gave me
a few hundred dollars to get sponsored. I only had 120 families on my mailing
list, the ones who contributed to the book. I called my new venture The Parent Exchange Newsletter, because
it would primarily be an exchange of parent and patient information, much like
the groups on Facebook do now. My resources were limited. I cut and pasted
paper submissions, and photocopied each newsletter and stapled them. I mailed
them and “PEN” was born! Primitive but effective!
After a year of this, Mary
Ann wisely suggested to let their promotional group help with the design. They
designed a simple but professional look to PEN. I submitted my articles, and
they did the layout and printing. We branched out to start writing about
topics, not just publishing family letters and photos.
Working by day as an
economist, full-time mother from 5 pm to 8 pm, then working on my newsletter
each quarter. We mastered home-infusion when my son was two so we were no longer
tethered to the HTC.
My biggest break came when my
colleague Rob Partridge, then Monoclate-P product manager at Armour, who had
approved my book and got me started, asked me to publish another book. The
first book was so successful; we had to do another printing soon! Families were
calling Raising a Child With Hemophilia
their hemophilia “Bible” and my mailing list grew with each family that wrote
to me. More shared their stories, watching to be heard.
Another book! But about what?
As my own children were
growing, I (who had a degree in child psychology and also had published
research on own children understand health and illness at different ages)
realized that as I read each night to my children books like The Hungry Caterpillar, Horton Hears a Who
or The Magic School Bus, there were
no books for children on hemophilia. Understanding how children learn to read,
and process their world at different age groups, a branch of psychology known
as developmental psychology, I felt equipped to try to write a children’s book
on hemophilia, to help children understand. Indeed, ideas just came to me as I
lived with trying to teach my own son about his disorder in a way he can
understand.
I proposed to Rob some
children’s books ideas, and he loved it! He approved. I also could sketch and
used to paint, so I was author and illustrator. I thought of a book or poems explaining hemophilia to preschoolers in a fun manner; a history book about Alexis, son of the last Russian tsar, a story which might have changed history forever. Remember I was reading Peter the Great while in labor with my son. I loved Russian history and wanted everyone to know why hemophilia is called the Royal Disease, and then to know the story of how hemophilia changed history, and created modern history. None other than Suzamme Massie, who helped write the Pulitzer Prize winning Nicholas and Alexandria, and whose son has hemophilia, helped me!
I realized that by lining up
some contracts for my newsletter (funding from Quantum) and my children’s books
(funding from Armour Pharmaceuticals) a dream was born: I could stay home with
my children. I wanted nothing more than to be a stay-home mom. I had worked so
hard, day and night, doing what we called “The Mommy Track,” trying to be a dressed
up businesswoman by day, mom by late afternoon and early evening, and now entrepreneur
each evening, I craved to be home to play with my kids in the sunshine, take them
to the park, to museums, the Boston Aquarium, make them lunches and relax a
bit. 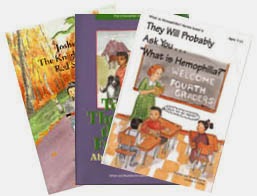 With a year’s worth of book contracts,
I realized I could quit my job, thus saving a fortune in daycare, professional
clothing and dry cleaning, and gas. And make a little bit of money on the side.
I had paid off my debts and was ready to enter full time motherhood, with some
side projects.
In July 1991, I quit my job
at the economic forecasting company, waving good-bye to my colleagues of six
years, grateful for all the business, contracts and number-crunching experience
I had. These would prove valuable to me as my own business grew. PEN continued
to grow and became focused on teaching, rather than just sharing. And we had a
new children’s book called Just a Boy,
modeled after Dr. Seuss books. And more would come.
Best of all, I was able to
spend a whole summer with my four-year-old son and one-year-old daughter. We
lived in an ancient home in a crowded neighborhood—just ten steps and you had
traversed the whole house! But we didn’t care. We were home, healthy and making
a difference.
Next: Going Global!
** My computer? Macintosh
II, the first Apple with color graphics. It features 16 MHz 68020 processor,
and 1 MB of RAM. A basic system with one 800 kb 3.5-inch floppy drive, sold for
about $,3900. Ouch. But I am still a loyal Apple customer.