Thanksgiving Day last Thursday was celebrated all across America but it was a sad day in Zimbabwe. We lost another young man to hemophilia, Khumbs.

Khumbs was very special to me. I first heard of him in 1998, when he was only eight years old. He was about to lose his leg after an ankle bleed became infected. It was a risky procedure because there was (and still is) no factor available in Zimbabwe. We tried to ship product as quickly as possible, to try to save his leg, but it was too late. In 2000 I traveled to Zimbabwe, and met little Khumbs at his home in Bulawayo, Zimbabwe’s second largest city, which always reminds me of New Orleans. He was charming, with a big smile. His mother had died recently. Loss, then more loss. Zimbabeans are used to losses.

In 2001 we held the first-ever hemophilia camp in Zimbabwe, named after one of the founders of the Zimbabwe Haemophilia Association, Norman Mubaiwa. 65 children who all come from impoverished homes attended. It was held at the Hwange Safari Park, and for the first time in their lives, the Zimbabwe kids got to see their native animals. Zebras, giraffes and wildebeests all came to the watering hole at dusk. Khumbs followed me around everywhere at that camp, smiling his infectious smile. On spindly crutches and one leg, he scuttled about, always tailing me. He didn’t speak English, only his native Ndebele. When I would turn and look at him, he’d get shy and smile. Later on, I saw him sitting by the small inground pool. I motioned for him to go in but he was too shy. Zimbabweans are so polite and sensitive. When I insisted, he finally believed me and next thing I knew, he shucked off his pants and jumped into the pool in his underwear, not at all conscious of his stump. He had a blast!

I took a photo of Khumbs at that camp, and his smile summed up the joy I have seen in children worldwide when they go to camp. He was beaming. I took that photo and had it digitally enlarged and processed like an oil painting. I hung it on my wall so that Khumbs’ smile was with me every day.

I returned to Zimbabwe in December 2007. Conditions in the country had deteriotated unbeliveably. 80% unemployment, one million percent inflation, food shortages. I returned to Bulawayo, not an easy task given the lack of gasoline; it’s a five hour ride from the capital. We visited Khumbs again. He was so tall! And so healthy looking! His wonderful uncle took Khumbs and his brother in, after their father died. More loss. Khumbs was perched on the same pediatric crutch that he had been using, which was now patched. After our happy visit, I went off to look for a new crutch.

We found Khumbs a sponsor and he became our first enrollee in Save One Life. This program provides financial resources each month for children with hemophilia in the developing world. His sponsor was Jill Smith, a hemophilia nurse from Australia, who had traveled with me to Zim in 1999. She had met Khumbs, too.

How shocking to awaken on Thanksgiving morning to a text message from Zim saying: “Khumbs is gone. We are devastated.” More loss, always more loss.

Khumbs’ picture will forever stay on my office wall, a snap shot of a time when we gave a brave little boy who had lost almost everything the most wonderful time of his life–hemophilia camp. And now, we are the ones left with the loss.

(If you’d like to sponsor a child like Khumbs, please visit http://www.saveonelife.net/ Despite his loss, we are saving lives!)

The Season for SHAREing

Thanksgiving is celebrated on Thursday across the United States but there are thankful people everywhere this week. One of them is Jagat Man from Nepal. Even though we helped him have a leg amputation, he’s grateful to be alive. He has hemophilia with an inhibitor and the bleeding and subsequent tumor in his leg may have killed him. 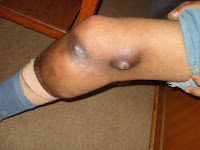 We have dozens of stories about those we have helped in impoverished countries, and we are pleased to start sharing them with you on a regular basis on Facebook. Project SHARE (Supplying Hemophilia Aid and RElief) now has its own page, and we welcome you to visit, leave a comment, and enjoy learning about your brothers with hemophilia in faraway places, where factor is usually not available. 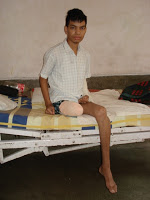 You will even be able to converse with our friends around the world.

In America this week, we can be thankful for our medical care, and above all, the factor concentrate that keeps our loved ones alive. We at LA Kelley Communications are grateful for the resources to be able to send factor around the world, to those in great need and in pain. Thanks to our sponsors, and also to those of you who have sent factor. Happy Thanksgiving!

YouTube can be a lot of fun– you can locate the worst of American Idol tryouts, music videos, that adorable baby dancing to Beyonce, clips from movies, even whole movies, and most likely any cartoon you ever wacthed as a child on Saturday mornings. The possibilities are seemingly endless.

It’s also turning into a source for hemophilia information and public awareness. One of the first and best items I ever saw on YouTube is actually a brief cartoon from India, featuring a child. Check it out! 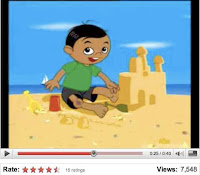 We even posted our own first video, from my trip last year to the Philippines.

Have you found a good video about hemophilia on YouTube? Let us know what you found. You’ll see profiles on people with hemophilia, a guy infusing, public service announcements and more. Surf away! 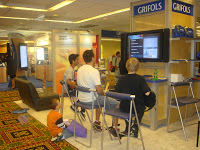 Last week was the NHF annual meeting, held at the San Francisco Marriott. Beautiful location, beautiful city and lovely weather all made this a very nice meeting for all. The fact that it coincided with Halloween in such a spirited city made it fun for many attendees. Of course there were meeting to attend, things to learn. No surprises (unlike last year’s meeting) and I was happy to see a big emphasis put on inhibitors this year. I attended the Grifols’ sponsored symposium on inhibitors, and was able to hear my friends Janet Brewer and son Stephen speak, as well as Kerry Fatula, mother of four boys (three of whom have inhibitors). If nothing else, the meeting was worth it to hear them speak. What powerful stories! They go through more medical interventions in one year than  I have been through in my child’s 22 years. This is a struggle faced by all families with inhibitors. 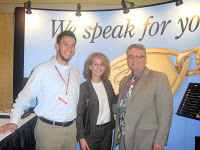 I was most happy to meet some folks from Medic Alert; our community uses their medical jewelery so often, it felt like meeting family! (See photo)

I gave a presentation on Saturday at the Baxter symposium, with the theme “Your Tomorrow Starts Today.” It was fun to share the stage with John McNeil, a young man with hemophilia getting his medical degree, who also happened to be my child’s counselor back at hemophilia camp! Social worker Terry Hammink (University of Minn. medical Center) did a great job moderating the morning. We were saddened only that Ellis Sulser, a top advocate in our community, could not join us as planned, due to his health. 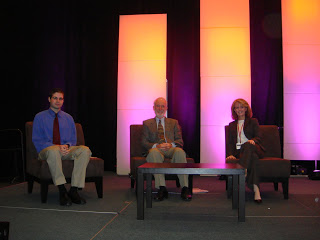 I saw a lot of new families, and some long-time friends, some of whom I have not seen in 15 years! This is one of the great joys of our community, to know so many, to share so much with them, and to go through life together. No matter how many years have passed, a family with hemophilia is a family to us all forever. Congratulations to the NHF staff for once again pulling together a great meeting for our community. 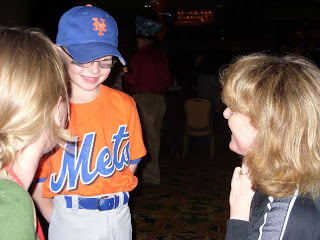 After the meeting, I took a day off with Paul Clement and his family (Paul writes for us) to visit Alcatraz, the infamous island prison in SF bay. It was historical, educational, and chilling. I highly recommend it to all; you’ll not find many places like it. 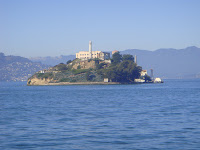 Angie…. I still owe you that glass of wine!

Great Book I Just Read
A Long Way Gone: Memoirs of a Boy Soldier by Ishmael Beah
I finished this in two nights. It is a gripping and tender story of an innocent African boy in Sierre Leone, whose idyllic life is torn apart by civil war when his village is raided and he is forced to become a boy soldier at age 12. He loses everything, his entire family, his innocence and even his memories as he is forced to survive and eventually commit atrocities against civilians and rebels alike. Eventually he is rescued by UNICEF, and he shares his painful rehabilitation without asking for pity. It is a harrowing account, and breathtakingly honest; Beah is an exceptional writer. There is a happy ending, though nothing can ease his lost years and innocence. A must read. Four stars.