On Tuesday, March 22, President Obama signed into law H.R. 3590, The Patient Protection and Affordable Care Act, representing the biggest change to the US healthcare system since Medicaid was introduced in 1965. But it’s not over yet. Many are unhappy with the final bill, and vow to protest it. The mood has turned ugly in many parts of America, as some think the bill will create a crushing financial burden on our future, and our children’s future, or was arm-twisted through the Senate and lacks any kind of bipartisanship, or even some think brings us ever closer to socialism. The victors are proud of their achievement, that despite the opposition, the bill was passed and a new era of healthcare begins.

For those of us with hemophilia or VWD, the bill provides the changes we have been advocating for years:

If the bill is not challenged or changed, our children will not face discrimination due to their disorder. They will be able to be insured.

There are serious attempts to change the bill. So we will all need to read and watch to see whether those attempts are successful in changing the bill as it stands. Many of the changes, should they stay, will not go into effect immediately; some, not even for years. Continue to read about healthcare insurance issues to know what is changing, what isn’t changing, and how this impacts bleeding disorders and you in particular.

And everyone has a right to be concerned about not just healthcare but our nation’s financial health. Try to read up on the facts about national debt, macroeconomics and how the Act will be funded. It’s extremely complicated, and not done justice with sound bites from TV or radio personalities. Will our children instead face greater out-of-pocket costs now? No one knows for sure how this will all play out. Keep reading, debating and forever watching your insurance policy. Now is not the time to get complacent, even though it seems our dream of better insurance for our children is here. 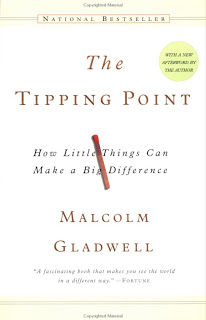 Gladwell looks at the phenomenon of how some ideas and products take consumers by storm, while others fade away. Even when small numbers of people start behaving differently, as in accepting fads or new trends, their behavior can ripple outward until a critical mass or “tipping point” is impacted… which can change history. He coins three types of people who help create this ripple effect. He hops from examples as random as Hush Puppies shoes and even the drop in violent crime in New York, and teenage suicide. Gladwell seems to be tying together a theory, but the whole book feels as though it’s trying much too hard to impress, much too hard to prove this theory. It’s not science and it’s not good sociology. In fact, I think Gladwell himself is just trying to create a ripple and hoping it goes viral! This book was on the beset seller list, but I wasn’t so impressed. It’s interesting, worth a read, but it’s kind of sociology-lite. Two stars.