Usha and I flew in last night to Calcutta, the “City of Joy,” location of the famous Patrick Swayze movie by the same name, and of course, Mother Theresa’s mission. We arrived quite late at night after a short flight from Hyderabad. Let me backtrack and finish up with Hyderabad. Camp was on Wednesday, and on Thursday, we awoke at 4: 30 am–Usha, Dr. Prasad and I drove to Hyderabad, a 5 hour ride.

We stopped around 9 at a restaurant and had some breakfast: eggs and toast for me, and delicious Indian tea, which while not spicy has some sort of zing to it. Really delicious and milky. Then back in the car, which was a luxurious ride, as the car seems to be new and is covered with terrycloth towels. We passed long stretches of fields, and many villages, all seemingly the same. Buffalo pounded the shoulders, and various roadside shops zipped past.

Entering Hyderabad, it got busier and busier, and then crowded. There are hundreds and thousands of motorbikes. The streets were pulsating with them. Huge buildings, large billboards: Hyderabad is one happening place. We drove to the Nazim’s Institute of Medical Services, where the local chapter heads and doctors awaited us outside. Inside, patients were waiting for Usha and me in the hallway, some eager, some confused. There was quite a bit of nervous energy: while I was speaking to one set of parents, someone would interrupt, start a new conversation, introduce me to someone else… quite confusing! Everyone seemed angling and positioning for attention. And why not? Everyone needs financial assistance and factor, and those we can provide.

All of these patients were really lovely to interview. When I met an obviously Muslim family, I said “Assalam a laikum,” and their eyes lit up in surprise. Just a smile and “Namaste” was enough to get everyone connected. The team served that lovely Indian tea; the only thing is, the dainty Indians serve it in a thimble size cup, while we Americans, especially this American, love to swig it down by the 12 ounces Dunkin’ Donuts size! Appreciating the cultural differences, they served me two cups.

Meeting them one by one, I was able to get the baby smiling, the little boys to relax, and the teens to loosen up. Most families earn about $25 a week, nothing. They really need help. All they want is a chance, a shot at life: the opportunity to go to college, be educated and get a job. The families all want and need help; the appeal in their eyes was plain. Who can help them? Who cares about impoverished patients with hemophilia? If we in the developed countries have no pity in our hearts, and turn away from them, who will help them? I always think, what if that were my precious baby with hemophilia? I would pray day and night for someone to help. I wanted to touch those boys’ souls, change their lives… come back again soon. Who are they? What do they feel? What can we do for them?

Back at the house, we sat outside on the veranda before dinner in the dusk, to relax. We heard the mosque call to prayers. I thought, here we are Christian and Hindu with the Muslim prayer calling out over the city… beautiful… like kindred spirits united against the common enemy of poverty.

On Friday morning, we had a rare day off. We decided to tour the city. We drove to the old section, to a busy bazaar, and I loved it! I hopped out of our car, dodged the speeding cars and motorbikes and snapped some photos. Usha and I checked out a temple of the goddess of wealth, Lakshmi. We visited a dress shop and I had fun selecting a few Indian salwar kameezes—less than $15 an outfit. I was feeling out of place with my Western clothes. We stopped for lunch at a nice restaurant, where I had dhosa and coconut: delicious! Back to the house, pack and we were ready for our flight to Calcutta, which is where I am now. 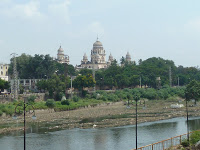 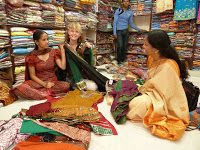 Upon arrival at 10:30 pm last night, we were greeted our colleagues, Mr. Oja and Sudip Chatterlee, members of the executive board of the Calcutta Chapter. The relatively cool 76 degrees last night belied a brutally hot day today.

I haven’t ever seen much of Calcutta though it was my second visit.

I visited in 2005 on another whirlwind visit of India, and only stayed 24 hours. I longed to see more of it, as I only know one part of it and probably not representative. I awoke this morning, opened my hotel window and was greeted by a big green, polluted pond, where workers were, at 7 am, already vigorously beating sheets and towels against rocks; I wondered if my sheets would end up there today?

Calcutta is huge and grimy, and even the paved streets seemed to perpetually throw up a cloud of dirt. Yet I see a lot of progress in the five years since I was last here.

The Calcutta Chapter was only a stone’s throw away, and we zipped off there to met with patients this morning. We interviewed 10 patients in five hours, and I must say, I saw some really great things, and some heartbreaking things.

First the great things: Calcutta was one of our first cities to enroll in Save One Life, and now I can see the payoff. The boys we enrolled eight years ago are now finished with college and getting jobs. They are paying for their factor. Some are even thinking of going back to school for further degrees! Many of them are quite handsome and came to the center to see me, well dressed. For example, Nazbul is now a tailor, even though he is only 18. With the Save One Life money from sponsor Eric Hill, president of BioRx, he bought two electric sewing machines, and earns $30 a week, which is way above what most of our beneficiaries are earning. Previously, he considered himself very poor, but now he is sustaining himself and even buys factor.

But we also met little Mokhesh, age 14 but so slim and tiny. He had chest pains, and he writhed in pain a lot during the interview. He and his father had traveled 5 and a half hours to come here.

We gladly paid for their transportation, and concerned, we arranged for him to have an infusion, as I brought with me donated factor. Without this donation, though, he would have to wait for hours to get the cryo or plasma into him. We had a long talk with the chapter about why they don’t get any donated factor. All over India chapters are finagling to get donations: why not Calcutta? The team didn’t seem to know where to turn to for donations (despite that I run Project SHARE and it’s right on the internet). I think after this visit, we will have them more aware of how to get factor. We also saw a huge need for physical therapy. The boys all have contractures and very weakened musculoskeletal systems. Usha began thinking of ways in which to get programs started.

Above all, I saw connection and compassion. Tanuka, the administrator of Save One Life for the chapter, was our kind of gal—she knew every single patient by name, and all their relevant information.

No one else there had the connection to patients like her. With this detail, she could ask better questions of them, and could determine their needs best. When one young man, 29, said he sat around watching TV all day, she said pretty much that’s it—no school, no work, no Save One Life funds. He was given a deadline by which to get his life going again, despite his obvious poverty and disabilities.

One boy who made a strong impression on us was Toten, 21, who lives three hours away. He was very quiet during the interview, until the end.

Then he shared with us his dream: He’s attending electrical engineering school, and once he is successful, he wants to help others, to give back. That’s one of the first times I had heard any of our beneficiaries say that, and it pleased us. We feel that with our blessings, we can give back. Poverty becomes less a socioeconomic level, and instead becomes an attitude. If Toten, who earns about $1 a day can give back someday, then we all can.