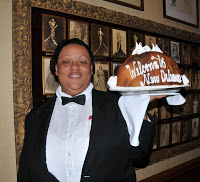 The theme of the 62nd Annual Meeting of NHF was “Marching Forward,” appropriate for a place like New Orleans, where you can expect a high school marching band to turn the corner of your street at any time. Situated at the Marriott on Canal Street, just a carnival bead’s throw from the Mississippi River, the event hosted about 3,000 community members, including physicians, nurses, social workers, nonprofit staff, NHF reps, pharmaceutical and homecare reps and of course, consumers! 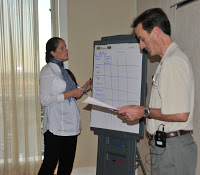 My week started with a five-hour workshop on Novo Nordisk’s new HERO program, the largest psychosocial research project in hemophilia history. We gathered a select group of HTC and consumer representatives to discuss ideas to bring the results of HERO to the US, to share with our community: what can we learn from the results and what to do with the results? It was a lively and challenging task, but with a great group that meshed well, it was also fun!

Opening night was heralded with a marching band and carnival characters on enormous stilts, handing out strings of beads to all. NHF Chair Stephen Bender and father of a daughter with hemophilia gave a moving opening speech recalling his daughter’s birth, and how he became an advocate for better health care as a result of their harrowing experience. Executive director Val Bias gave a motivating speech about unity in the bleeding disorders community. He also unveiled a new campaign for women with bleeding disorders, called “Victory for Women.” This will replace Project Red Flag. 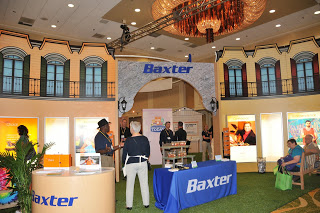 Later we walked through the exhibit hall, which contains booths by all the vendors who serve our community, and all had a Mardi Gras theme. There was face painting, games and great food. 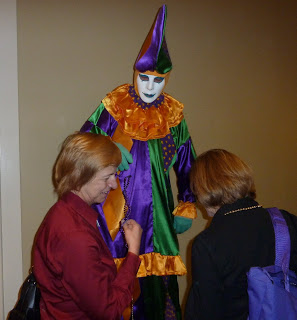 There were many sessions on a variety of topics related to bleeding disorders. Women with bleeding disorders figured prominently as a topic. I also attended a very interesting town meeting by the Committee of Ten Thousand—COTT. COTT is often referred to as our third national organization. We have NHF, HFA and COTT. This certainly doesn’t refer to third place. Each of our national organizations has a vital role to play.

This two hour meeting had two topics: blood safety, prompted by the new movie Bad Blood; and privacy issues for patients. The first topic was kicked off by Corey Dubin, a person with hemophilia and an icon in our community. Next to him was Nathan, representing the Gay Men Health Crisis organization. This year 18 senators sought to repeal the FDA ban on blood donations from gay men in light of all the safety procedures and testing performed in the US. The ban has been in place for 17 years, started during the HIV contamination of the 1980s.

A lively discussion took place but what was unique and wonderful was the mutual admiration and respect of COTT and GMHC. Each respected each other’s view about blood safety and the right to donate blood, and whether that even was a right.

The second topic unleashed a firestorm of concern: patient privacy rights. Are patients being adequately informed of how their data is being used? One patient, a well known advocate, stated that patient data is gold. People in our industry make money off of patient data, good money. How is this safeguarded? Patients are signed up for clinical studies—are they well informed? With health care reform, and anticipated countermoves by the insurance industry, patient data is needed and desired to justify decisions to restrict access to care, access to products or to protect clinical treatments. Data is everything. But do patients know who has their data?

With representatives of several different and independent organizations and patient groups—and industry—in the audience, it became clear that each group had similar questions about ethics, funding, transparency, and patient protection of any organization collecting patient data. I explained how LA Kelley Communications collects patient data through our mailing list, and how fiercely we protect it.

For other groups, it’s not as clear what the data is to be used for ultimately. Will it be sold? There’s a market for it. A big discussion ensued about bringing various groups to the table to discuss privacy and to get some questions answered. COTT has acted as a watchdog for blood safety, and now may act as a watchdog for patient privacy— a topic more vital than ever in this era of health care reform. Patient Data equals power, power to discriminate, make policy, earn money, effect government policy… the possibilities are many. This data is our data—our child’s data, our carrier daughter’s data—and we need to protect it by knowing who has it and what they plan to do with it.

After the town meeting, some people went to social events. With me at the convention were my office mates, Zoraida Rosado and Kathryn Ondek, who attended the very fun and hip CSL Behring event Friday night. Also, we had a special guest—Usha Parthasarathy from India, with whom I had just finished a 16-day tour of India. She was able to promote our Save One Life program to many people, and secured more sponsorships for the 300 children who are waiting for sponsors.

On Saturday morning I facilitated a symposium hosted and funded by Baxter Healthcare, titled “Paving Your Way, Protecting Your Future.” Guest speakers included Don Molter, social worker and career counselor at the Indiana Hemophilia and Thrombosis Center, and Dr. Art Wood, vice president of Patient Services Inc. Don stressed the importance of taking the SATs or ACT, applying for scholarships and to be open to education even later in life—especially in this economy, when many people need to rethink their career choices. He introduced the Baxter Education Advantage Scholarship, which helps people with funding for college and also vocational training. This is open to anyone, not just those on Baxter’s products.

Art’s presentation included salient highlights of the ACA, the new health reform act, and how this may impact families with bleeding disorders, and how patients can take action now to get informed and learn more. It will be absolutely vital for everyone to read their insurance policy and to read updates regarding the ACA and how it impacts individual policies.
We also had two community speakers: David shared a very touching story of having hemophilia, HIV, hepatitis, losing his thumb in an accident… and losing his wife of 24 years when the marriage was overwhelmed. With a deepening of his faith and assistance from his HTC, he successfully returned to work and now is remarried. Dwight and Kathleen are parents of eight children, four with hemophilia, and shared their trials in trying to stay insured. With the help of PSI, they were able to make it. Their handsome son Patrick was in the audience, admiring his parents.

The three day event closed with a final event, also sponsored by Baxter, at a warehouse where we walked by enormous plaster of Paris statues of King Kong, Pokemon, King Neptune, the Cowardly Lion and Yoda—all Mardi Gras characters. Also we saw floats being prepared for the next Mardi Gras. It was really amazing! At the end of the walk was a large indoor room to house about 2,000 people who feasted on New Orleans cuisine, dance to an excellent band, and have their fortunes read by Tarot card readers. I caught up with my friends from California—Laurel McDonnell, Paul and Linda Clement—and enjoyed the company of our very special community. 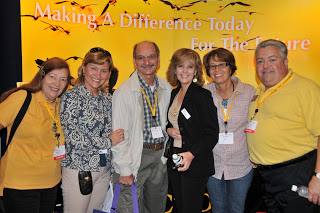