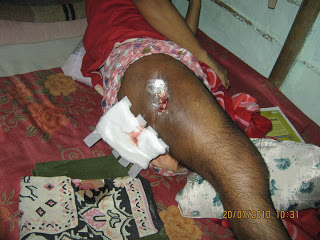 I just came home from the cinema, where I watched The Way Back, a film by Peter Weir, my favorite director. It’s based on the true story, documented in the book The Long Walk by Slawomir Rawicz, which I’ve read, of a young Polish man who is sent to Siberia during World War II, and endures incredible suffering. Just the train ride alone to Siberia was miserable, even for the guards. Eventually he breaks out of the camp, and walks from Siberia all the way to India. Through Mongolia, China, Tibet, over the Himalayas and finally to India, burying his fellow camp-breakers along the way. What never waivered was the young man’s humanity, his forgiveness, his hope.

You don’t need such dramatic storytelling to see such heroes. They exist right in our community. One is Biru. Now we help scores of people with factor, and sometimes we don’t recall every person’s name. But there are some you don’t forget. This is what I read in India’s annual report:

Posing for a photograph is one thing that Biru likes. He has lived with hemophilia for over 30 years, fulfilling his role of being the elder son in a family that has a poor, jobless father; a bed-ridden, diabetic mother; a schooling sister, and another hemophilic brother.
Life, however, takes its turns. And more often than not, they are sharp. This picture taken on July 20, 2010 is perhaps one of the last few pictures that Biru posed for.
Today he is preparing for a big compromise, which would mean that if he has to survive, he has to pose without a leg throughout the new life this would get him!
“It is our choices, far more than our abilities, that show what we truly are!”
For Biru too, there are choices: One, he can die of hemophilia, or two, he can sacrifice one of his leg, and live like that forever. He has chosen to live because of a simple reason: “If I die, there would be no one to feed my family. I have to live, even if my leg goes away. Once I’m healthy, I may not move around, but I will fly high with my determination and hard work, and take good care of my family!”
Some five years ago, a hematoma developed in Biru’s leg. Recently, when this brilliant Tinsukia boy secured the first position in Master of Science, the hematoma burst, leaving him completely bed-ridden in a painful condition. The severity is such that he cannot move, or even speak. Given this condition, the coaching classes he used to run are also closed down. Doctors have advised him a transfusion of at least 3 units of blood everyday. This is to prepare him for the amputation of his leg, which, should be done as soon as possible so that further pain and suffering can be lessened.
The operation will require at least 100,000 IU of factor, in addition to hospital costs. Biru is moving to Mumbai soon to part ways with one of his legs that helped him go wherever he wanted to. Sure, this will be a loss, and cause him great pain. However, his hopes are still alive. He is composed and determined as his eyes are fastened to the skies that he wants to achieve after a successful operation.
“This is happening,” Biru says, “because I’ve made the right choice in life!”
Here’s your chance to make one too.

What a beautiful attitude! Project SHARE will be helping with the factor to make this operation happen. Our colleagues in India are fundraising so he can pay for the operation. And just a few weeks ago, his mother died. But Biru’s spirit is strong. It has to be, to endure the mountains he must climb.