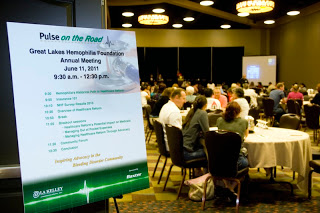 Zoraida and I spent the weekend in Wisconsin Dells, Wisconsin, at the Great Lakes Hemophilia Foundation annual meeting. On Saturday we presented “Pulse on the Road,” which brings our annual newsletter about healthcare insurance reform live to hemophilia families across the country.

We had a wonderful turnout: Karin Daniels and her team really deserve a round of applause for the hard work that went behind this!

We opened the morning with a look at how our hemophilia community has changed through the past 15 years concerning product, pricing and reimbursement, and how we stand now. Insurance companies, “payers,” once reluctant to touch hemophilia, though it was increasingly an expensive disorder to treat, eventually overcame hesitancy when the increase in healthcare costs forced both payers and state health programs to scrutinize hemophilia products. 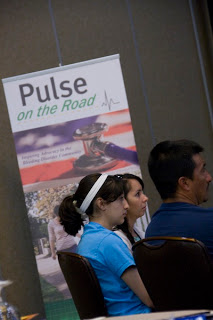 Elizabeth Stoltz of Baxter presented “Insurance 101,” and reviewed key terms and concepts that everyone needs to know to navigate the new landscape of hemophilia healthcare reform.

Ruthlyn Noel, policy manager with the NHF, presented survey results from the 2010 patient survey about healthcare. The good news is that all our efforts to educate the public is working: between 80-90% of respondents knew that lifetime limits had been removed and that children can stay on their parents’ insurance plans until age 26.

Finally, Jim Romano of PSI presented Healthcare Reform, now called “The Affordable Care Act,” and how it will impact hemophilia. While most of the action starts in 2014, there are many things we all need to know to prepare for the many changes. Jim talked about the central issue, mandated insurance, and how the government will assist in getting coverage, from “exchanges” to state tax credits to expanding Medicaid.

After a short break we had three breaks out sessions, on advocacy, out-of-pocket costs, and Medicaid. Families really enjoyed the informal and one-to-one attention from the speakers.

Then we reconvened to have an open Q&A: this was a great tie for families to present their personal concerns or general questions. One question concerned hospitals: what do parents do when they bring their child in to the emergency room and are forced to buy the hospital factor? One father shared that his one hospital visit was $100,000! Clearly his factor was marked up 400% or higher. He received great advice about why this might happen, and how to prevent it from happening again.

After the program, families had more sessions by local speakers and HTC staff. After dinner, they had the opportunity to visit the water park. It was a wonderful weekend, filled with information and fun!

This fascinating book is told by a man who grew up in the 1960s as a Maasai, the tribal group that dominates eastern Tanzania and Kenya. Nomads to this day, they live in tightly knit families, and family life focuses on the rearing of cows, as currency, as food source, as their future. The Maasai are known for their colorful red clothing, and are proud of their warriors, who are initiated into manhood by a circumcision ritual and ability to spear a lion in self-defense. Tepilit had a remarkable life: growing up on the African Serengeti in complete simplicity but at one with nature. When his father sends him to a Christian school to be educated, he is introduced to new universe, and his life becomes one vast adventure that eventually lands him in Hollywood and the central character in a National Geographic movie. The book beautifully describes Maasai life, and then will make you smile or laugh out loud with Tepilit’s charmingly naive descriptions of his first automobile ride, plane ride, and impression of New York City. I met a 20-year-old Maasai warrior last year in Kenya, and chatted with him about his life. He easily walks three days in the utterly dangerous savanna, armed with only a spear and knife. He told me, “Anything I need, the earth provides.” I have great respect for the Maasai and truly enjoyed this autobiography. Three stars.