Leeches: A Treatment of Hemophilia 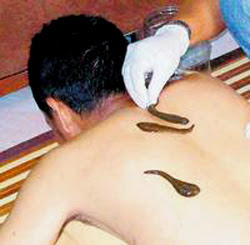 This is an amazing account sent to me by my colleague and the president of Hemophilia of North Carolina, Richard Atwood. Richard is a regular PEN contributor. This article is about…. leeches. Not for the faint of heart.

In 1839, Mr. R. Liston at University College Hospital in London, England reported on a case of hereditary hemorrhagic diathesis. His patient, S.P., was a 32-year-old farmer with temperate habits. He was a large man, strong and healthy, with a smooth, fair complexion, dark-grey eyes, dark hair, and sandy whiskers. S.P. reported having lost alarming quantities of blood from extraction of teeth; he was treated with pressure and cautery. At age 19, he had a small wart cut from his hip; he lost so much blood that he fainted and was debilitated for several days. The family history revealed that his maternal grandfather and 6 brothers were also affected with the same peculiarity of constitution.

In February 1839, S.P. fell and hurt his back and loins. Several days later he experienced sudden pain in his left groin, with pain in his left thigh down to his knee. A surgeon examined the subsequent swelling in the groin and ordered leeches. After 2 leeches were applied, the resulting hemorrhage could not be suppressed. The mass in the left groin was about the size of the patient’s fist, similar to a hernia. S.P. was admitted to University College Hospital on March 8, 1839. The abscess was opened with the potassa fusa resulting in slight bleeding. This blood was examined under microscope and found to be deficient of fibrine and in a bad state, containing a proportion of globules characteristic of pus. The patient was discharged… cured.

In 1840, David Burnes MD of Bloomsbury Square, in London, England reported on hemorrhagic diathesis in 3 brothers: 44-year-old William, 30-year-old Charles, and 25-year-old John. In addition, 2 maternal uncles had a tendency to bleed easily, while their mother, 4 sisters, and 3 other brothers, all over 20 years, did not develop this peculiarity.

In July, 1939, William was seized with inflammation of the testis. The usual remedies were ordered including 4 leeches to the scrotum. This treatment removed the disease, but blood continued to ooze from the leech-bites for several days to the point of debilitation. After spontaneous coagulation of the blood over the wounds, William improved much in about 28 days. He then pushed his hand through a pane of glass while opening the window and cut his thumb on the outer side. The free bleeding from the wound was temporarily arrested with adhesive straps until the inflammation of the hand required their removal. The subsequent freely oozing blood continued in spite of the use of styptics, pressure on the radial artery, and ligature. The irritable, greatly debilitated, and almost blanched patient was kept in bed and starved! The treatment of digitalis, ipecacuanha, and nitrate of potash was ordered, along with keeping the wound constantly wet with a lotion of spirit and muriate of ammonia. After a clot formed, the wound healed 24 days from the accident.

Charles, who had a slender frame and great muscular strength, presented in March 1837 for symptoms of enteritis. Charles stated that he and other family members bled easily and declined being bled from the arm. Instead, 6 leeches were applied over the pain on the left side of the umbilicus. This treatment instantly arrested his disease, but blood continued to ooze for 8 days from the leech wounds. After a vexatious confinement to bed caused more by the remedy than the disease, Charles recovered.

While out shooting in October 1827, John fell from his horse and sustained a severe injury to his arm. The day after his biceps were swollen and exceedingly inflamed and his forearm was bruised from elbow to wrist. An order was made for 12 leeches with bleeding encouraged by warm fomentations along with aperients and other medicines. The hemorrhage could not be stopped by pressure, alum, flour, or cobwebs, until nitras argenti was applied. John had constant oozing of blood over several days and subsequently died from loss of blood.

And why leeches? Leeches were used for every kind of ailment during this time in medical history. They certainly didn’t stop bleeding; while attached, leeches secrete hirudin to prevent coagulation of the blood! 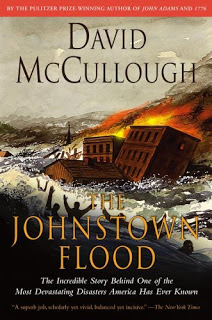 The Johnstown Flood is usually a sidebar and two paragraphs in a high school history book. McCullough, our nation’s master storyteller of American history, makes this a page-turning, electrifying account of the Katrina of the 1880s. You will gasp and may cry while reading this. McCullough at once has given an accurate account, written like a novel, and serves as a memorial. The South Fork Dam served to create an aquatic playground for the super rich of Philadelphia, and despite warnings of the lack of an overflow drain, and various weak spots, nothing was done. Townspeople who lived below the dam often wondered and worried, but no one ever believed anything could possibly go wrong. Then it rained… like the Deluge. And the consequences were as dire. On May 31, 1889, the weakened, earth-made, South Fork Dam burst, and pounded and shredded everything in its path. Trees, dirt, horses, fences, barbed wire gathered like a wall of destruction, hell-bent for Johnstown, its denizens unaware of the horror about to be. Over 2,000 lost their lives in the most horrific ways; entire families of hard working people died. When it was over, grief turned to anger at the rich, at the paparazzi that came to gawk. This is a fascinating story, gut-wrenching and masterfully told. Read it. And take the time to read all the names at the end of those who died. Four stars.