Show Me the Tats 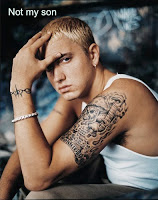 I read an interesting article on the newswires, concerning hemophilia and tattoos.

It seems everyone has tattoos. Teens, moms, young, old… they are as commonplace as pierced ears, and more commonplace than piercings elsewhere on the body. I saw a guy yesterday, bald, with a huge one that snaked up his neck and right up onto his bald head. It seemed dramatic, until you realize the person who walked by him also had a tattoo covering their forearm, and the mom pushing her baby in the stroller has one encircling her ankle. I feel rather outdated. I don’t sport a single tattoo. 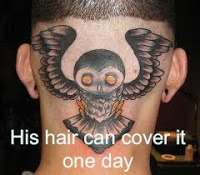 It makes sense that people with hemophilia will have tattoos as well. My son does; he has a lovely Irish shamrock on his left deltoid, and four virtues in Latin stenciled across his left forearm. Rather large. I am sure if we polled them, a great many of our guys have tattoos. As do their moms, probably!

So why is Portugal up in arms about it?

“Consumer rights association highlights Portugal’s lack of body art laws July 30, 2011. Consumer rights watchdog DECO has voiced concerns about Portugal’s lack of laws regarding piercings and tattoos. The association claims that it is up to the artists to warn clients about potential risks and health hazards that body art can entail, though many fail to do so. During February and March this year DECO paid 46 visits to 29 tattoo and body piercing parlours in and around Lisbon and Oporto. The association concluded that little improvement had been made since its last investigation, which it carried out in 2005.

“According to the watchdog, none of the professionals with whom their researchers made contact enquired about the client’s present state of health, and only 18 pointed out how to properly clean and look after tattoos or piercings. Eight tattoo artists said it was a painless procedure or avoided answering questions.

“The association stressed that “people suffering skin diseases like psoriasis, or who have allergies to paint, metal needles or nickel earrings should not have any type of body art”, and said that tattoos should be completely off limits to anyone who suffers from epilepsy or haemophilia.”

Completely off limits? Why? DECO needs to get up-to-date with hemophilia. My son got his tattoo without prophylaxis. (Of course, he did not consult me on this first) I would recommend a prophylactic dose, but can’t imagine why anyone who has hemophilia could not get a tattoo.

DECO has demanded that a law is passed to protect consumers’ rights. I guess this might mean they would ban tattoos from those with hemophilia? 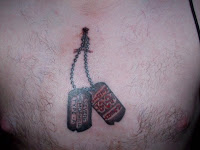 Hemophilia is still seen as an ancient and mysterious disease to most people. Tattoos are commonplace, and probably among our community, too. What would DECO say about Danny, who sports the most interesting of all tattoos for those with hemophilia? This tattoo might actually save his life one day! 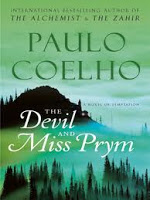 Are humans inherently good or evil? A mysterious man arrives in a remote, clannish and disintegrating town with a proposition. He will leave ten gold bars, worth millions, to the townspeople if they will simply kill one of their own. A former arms dealer, the stranger struggles with demons from the past and a personal tragedy. The town struggles also with a unique past and no future. While the town argues, withdraws, is afraid, one young woman decides to play the game, to beat the man she feels is the devil. Brazilian Coelho is one of the world’s most popular writers and presents stories that are simple to read, but profound in meaning. Three stars.