All is quiet on New Year’s Day here, with the warmest winter in history in the Northeast. My grass needs to be cut!

Here’s some good news to start the year off…. Baxter’s Advate has been FDA-approved for routine prophylaxis in both children and adults, the only factor product to be so licensed.

In a Phase IV prophylaxis study, funded by Baxter, researchers, led by Dr. Len Valentino of RUSH University, found that prophy on Advate reduced bleeding episodes from 44 to only 1 in a year: great news and findings.

From its press release, Baxter reports that “for the prophylaxis regimen to prevent or reduce frequency of bleeding episodes, Advate dosing of three to four times weekly (between 20 to 40 international units of factor VIII per kg body weight every other day) may be used. Alternatively, an every third day dosing regimen targeted to maintain FVIII through levels greater than or equal to one percent may be employed.”

Of course, most parents and patients know that prophy with many products has been around for a long time. But it’s important for the prescribing doctor to feel comfortable prescribing a product with FDA approval. It takes a long time and money to investigate these products and their treatments, so it’s a cause for celebration when a Phase IV study is complete.

And so is New Year! Wishing you all a great year! 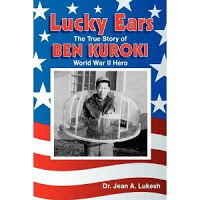 Written for young readers, you can easily polish this book off in 30 minutes, but the images will stay with you a lifetime. Ben Kuroki was born a Nebraska native, of Japanese descent, and suffered through challenges like the horrible Dust Bowl, the Great Depression, and poverty. But he was deemed “lucky” by his parents for the little dimples he had on his ears. He never experienced racism until he enlisted in WWII following the attack on Pearl Harbor. He had no sympathy for the country of his ancestors yet was suddenly treated as inferior. He finally was allowed to enlist, and became one of the most famous bombardiers in US history! He had more bombing runs than almost any one else, so great was his love for the US. Despite the racism, he became a US hero, and was honored by President George W. Bush. He escaped many close encounters with death, and you close the book marveling indeed at his luck, and his wonderful career and patriotism. Five/five stars!

And this makes 35 books I read this year, achieving my goal!