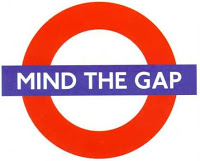 When you prepare to hop on or jump off the “tube” in London, the underground train’s speaker system says in a very sexy voice (aren’t all British accents so), “Mind the gap.” The gap is that space in-between the platform and the train, so yes, you’d better mind the gap or else. Stuck in there and you could lose your leg or life.

Closing the gap was the theme of this year’s World Hemophilia Day, celebrated April 17 all over the world. Mostly it’s a way to unify our diverse and dispersed community, and also to raise public awareness. My favorite activity this day to date was last year, when Romanians turned the major fountain in Bucharest red with food dye, representing blood. And all over the world you see posters of kids with swollen joints, and things like that.

Here’s my poster representing the gap: real life Kirby, age 10, from the Philippines. This poor child languished in a hospital bed in a far off province, with gangrene in his leg just two years ago. Doctors didn’t even know he had hemophilia. Only when he was accidentally discovered by Andrea, one of our colleagues there, did anyone suspect he had hemophilia. Project SHARE sent factor VIII and he had his leg amputated. And that’s the good news.

He looked healthier post-op, and he survived. He was enrolled in the hemophilia society. But yesterday I received an urgent request from his doctor: Kirby’s leg is infected again. Send more product, 100,000 IU so we can amputate. Again.

Kirby, or rather his leg, is stuck in the gap. No products available in the Philippines. Hard to imagine: we had a military base there. People speak English there. The Philippines has been our buddy for decades, a springboard that buffered us from military threats from the east. But they have never qualified for our medical care.

And the Philippine hemophilia communities are not yet lobbying their government for their right to get factor. What will it take? Boys with hemophilia are dying every month in the Philippines. How many boys must die before they realize they’ve got a huge problem and are willing to do something consistently about it?

The gap at this point looks like a chasm. Kirby could very well die without the factor to amputate again. Andrea wrote to me tonight in fact, and told me about an upcoming meeting this month that will put the issue on the table. Enough is enough: you can only close the gap when patients come together, decide they have a right to factor, and then present this to the government, and keep on pressing it.

Russia did it. Brazil did it. India did it. Even little (and poor) Honduras did it. The Philippines can do it too, if they want to.

But it may not be in time for Kirby. When I think of Kirby’s case, I don’t think of closing the gap, it’s more like Touching the Void, a chasm cut into a mountain that divides the haves from the have-nots. And even if we donate all 100,000 IU by some miracle, there are more Kirby’s. There are only three ways to close the gap: lobby, lobby, and lobby.

(Anyone with any factor VIII that is unwanted or unused for medical reasons, please ship to us ASAP)

This science fiction classic is timeless, no pun intended, and available for free on Kindle. Wells indeed is the father of Science Fiction, and created the genre with this, his first novel. A Victorian man, only referred to as the Time Traveler, invites his scientific and literary colleagues to dinner at his home, but arrives himself late and disheveled. He shares his bizarre and fabulous story: he has built a machine that allows time travel. He went into the future, the year 802701, to what he first thinks is Utopia–no one worries, no one works, everything is shared, people seem at peace. But not so: mankind, rather than reaping all the benefits of accumulated scientific knowledge, has become two races, the Eloi, gentle, child-like simpletons that have no culture, reading or seeming purpose, and the Morlocks, hairy, snarling, subterranean ape-like creatures that actually work machinery and harvest and cannibalize the Eloi. Wells, through carefully crafted and beautifully scripted prose, weaves an amazing story about mankind’s future, and the perils of advanced civilizations and communism. Wells’ sci-fi is a vehicle for his critique on social systems. A fantastic book by a literary genius. Five/five stars.