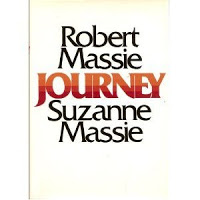 Today is Mother’s Day, a special day for mothers of children with chronic disorders, like hemophilia. The sacrifices and suffering they endure creates women of strength and compassion, and they deserve to be celebrated. Me? I was treated to “The Avengers” by my three children, with an extra large popcorn and soda. Perfect way to celebrate!

And a perfect book to read this week is Journey, by Robert K. and Suzanne Massie, first published in 1973. The intimate story of a young couple facing the diagnosis of hemophilia in their infant son, Journey has become a classic in hemophilia. It is, arguably, the first book written about hemophilia. It slowly unveiled the suffering and disruption hemophilia causes, and what life with hemophilia was like before the advent of clotting factor. The story is written in alternating chapters by Robert and then Suzanne. They each have distinctive styles. Robert shares the history of hemophilia, the genetics, the science behind it and the treatment. He also delves into the blood banking industry, and the shocking policies and politics of blood. Suzanne shares the family’s story, day to day, and the exquisite pain a mother experiences while watching her son suffer through the night.

But these are not ordinary parents. Robert K. Massie is a Pulitzer prize winning author, and having a son with hemophilia and being a writer at Newsweek, led him to research and eventually write Nicolas and Alexandra, the captivating masterpiece about the last Tsar of Russia, whose son also had hemophilia. It reads at once like a great historical novel, highlighting the tragic love story between the two royals, and postulates how hemophilia might have contributed to the downfall of the empire and the take-over by the Bolsheviks. Suzanne helped research and edit the book extensively, and in time, became an expert on Russian culture and history. The family gained notoriety when the book was published and then made into a Hollywood movie.

The story concludes when their son Bobby is 18. Later editions included an update: Bobby survived, contracted HIV and hepatitis C, attended Ivy Leagues colleges and became an Episcopalian minister. He also became a social activist (most notably against South Africa’s apartheid system) and a politician, running for Lieutenant Governor of Massachusetts, and later, the US Senate. He has dedicated his life to public service and has accomplished so much.
Suzanne, his mother, became an author in her own right, on Russia, and later became President Ronald Regan’s advisor on Russia during the Cold War! She could never have seen where her journey as a young mother of a child with hemophilia could have taken her.
As mothers of children with hemophilia, we know the limitations our sons can sometimes face. Reading Journey makes you appreciate what is possible, how much we as women can endure as mothers, and gives hope that despite the suffering, crippling, hospitalizations, pain and days or weeks lost from school or work, all things are possible. Suzanne is an extraordinary mother who raised an extraordinary son.
I am very proud to say that we will be honoring this mother and her son at our second annual spring gala for Save One Life this Thursday in Topsfield, Massachusetts. This is another story to add to their journey. Suzanne is now 81, lives in Maine, and is still writing! Bob has just published his memories (which I will review in a future blog) and Suzanne hopes to publish her story on being Regan’s advisor.  It is an honor to know this mother and to celebrate her life and accomplishments on Thursday.
Happy Mother’s Day to all those with children with hemophilia!
You can order used copies of Journey through Amazon.com; the book is out of print and new copies are not available.