Laurie Kelley June 24, 2012
I feel like I went to the high school senior prom I
never got to go to in 1975. On Wednesday night the Plasma Protein Therapeutic
Association (PPTA) celebrated 20 years of representing the plasma manufacturers
worldwide. Dressed up for this black-tie event in Washington DC, I was able to mingle and meet
with CEOs, senior executives, patient advocates and the wonderful staff of
PPTA.
The Plasma Protein Therapeutics Association (PPTA)
is the primary advocate for the world’s leading source plasma collectors and
producers of plasma-based and recombinant biological therapeutics. The
medicines produced by PPTA members are used in treating life-threatening
diseases and serious medical conditions including bleeding disorders, immune system
deficiencies, alpha-1 antitrypsin deficiency, burns and shock. As the global
representative for the plasma collection and therapeutics industry, PPTA works
cooperatively with patient groups, policymakers, regulatory agencies and other
stakeholders.
I met with many good friends and colleagues in hemophilia: Art Wood
and Jim Romano from PSI (you do know what PSI is, right?); Pete O’Malley of
Baxter; Paolo Marcucci, CEO of Kedrion and colleague Federico Rolando; Patrick
Robert of the Market Research Bureau and his lovely wife Clare; Chris Healey of
Grifols; Shinj Wada, CEO, Biomat USA, Inc. and many others.
Jan Bult, president and a personal friend of mine,
gave a wonderful speech and then showed a 9-minute movie of the importance and
history of plasma-derived therapies. (This film is available through PPTA if
you want to order it; I highly recommend it). It’s staggering to realize all
the people whose vision made these therapies a reality, and then to hear and
see the actual patients whose lives have been improved because of them. I’m so
locked into hemophilia, I lose perspective that there are millions who suffer
from immune disorders, for example—and face the same issues that we do: access
to affordable therapies, health insurance, complications, employment.

But the big surprise of the evening was an old friend.
When Jan introduced the keynote speaker, Theresa Andrews, I thought, not her,
not the wonderful hemophilia social worker I knew from University of Virginia
who edited my books and articles many years ago, who wrote for us, who had
positive attitude plus. Yes, it was she! But what would she speak about? She
had “retired” years ago.
Who knew she was a two-time Olympic gold medalist?

Her story was amazing. Perseverance, team work,
winning the gold by only a fraction of a second, and best of all, Theresa gave her first Olympic gold medal to her brother Dan in a private
gathering, honoring him for his courage after he was paralyzed at the age of 19.
This brother went on to be a judge, husband and father of several children, and
Theresa, who has perseverance and great attitude, says Dan is her inspiration!

I went to congratulate Theresa and we embraced
like long lost friends—which we were! She let me wear the medal and we promised
to stay in touch. Theresa just radiates good will and positive spirit, and
together with her brother’s story makes you feel that anything is possible.
I am quite partial to plasma therapies because
while they play a vital role in countries like the US, they are essential to lesser-developed
countries. Lower prices for plasma-derived factor means governments with small
budgets can better afford them. And the PPTA team will continue to watchdog and
monitor for safety.
Congratulations to Jan, Albert, Charles, Julie,
Josh, Diane, Dawn, their colleagues and all the supporters of PPTA. And thank
you for a wonderful evening!
For more info: http://www.pptaglobal.org/
Great Book I Just Read
Jayne Eyre by Charlotte Bronte

I read this in high school and loved it, and loved it even more when I just read it again. Jayne Eyre is a neglected, often abused, young girl, “plain” and frail outwardly but with a core of steel. The lyrically written book describes nineteenth century England’s orphanages, the cruelty faced by hapless children and their eternal resilience will bring tears to your eyes. Jayne secures a governorship finally as a teen in a mansion for a young French girl with a mysterious father. Even more mysterious is the strange woman locked away in the attic. When the master falls in love with Jayne, Jayne allows her heart to dare dream of love, only to see it dashed literally at the alter of marriage. Just when you think Jayne can suffer no more, she pulls in her resolve, shoulders her pain and goes on. The ending is beautiful, haunting, and magnificent. Five/five stars. A masterpiece.

Wheels for the World! 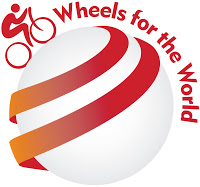 Last
year I conquered Mt. Kilimanjaro to raise money for the nonprofit I founded, Save One Life. We’re starting to corner the market on “adventure fundraisers”!  This year? We conquer the
American highways with “Wheels for the World”!
On Monday, June 18, Barry Haarde, a 46-year-old Texan living successfully with hemophilia A,
HIV and hepatitis, from Texas, will start a 3,667 miles coast-to-coast bike ride from Astoria, Oregon to
Portsmouth, New Hampshire to raise funds for Save One Life. This is the first time someone with hemophilia will bike across
America for charity!
Save
One Life is a Massachusetts-based international nonprofit that provides direct financial aid to impoverished people with bleeding
disorders in developing countries. Founded in 2001, Save One Life provides
one-to-one sponsorships for almost 1,000 beneficiaries in ten countries. In
addition, it provides funding for camps, scholarships for students and support
for outreach to locate patients in rural areas. Barry is one of our dedicated
sponsors.

Please
help support Barry!
Pledge
by the mile or by the state; make a one-time donation or sponsor a child—all
proceeds go towards operations and programs to help Save One Life’s mission.  Thanks to Presenting Sponsor Baxter Healthcare International for helping to make this possible!
Barry can be reached at redsaleen97@yahoo.com and is on Facebook. You can sign up on Facebook for the Wheels for the World event, and follow Barry as he checks in daily with his progress! https://www.facebook.com/events/376245012409379/ 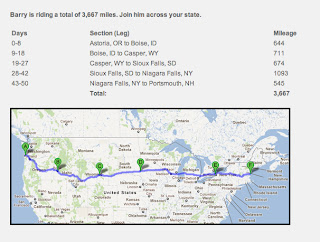 Home of Elvis… and the Ancient Greeks*: Pulse on the Road

Pulse on the Road presented its program in the beautiful city of
Memphis. We were honored to be invited by the Tennessee Hemophilia and Bleeding
Disorder Foundation to their annual meeting, where over 300 family members
assembled to learn more about efforts to preserve hemophilia care. The meeting
opened on Saturday with a speech by Memphis Mayor A.C. Wharton, Jr., an
intelligent and charming gentleman, who pledged his support for the Foundation.
Mary Hord, executive director, then reviewed the incredible roster of programs
and activities provided by this successful and high-functioning NHF chapter. They
have over 1,000 families registered, something to be proud of in itself!

Then came a profound, humble, and at times very humorous recollection
of a personal and positive life. Speaker Rev. Shane Stanford is the pastor of a
church in Memphis, recently relocated from Florida, who has hemophilia and HIV.
I don’t want to give away his spectacular presentation, all done without a
single power point, but it is of a celebration of life over adversity. I don’t
think there was a dry eye in the room, although everyone kept saying they had allergies
or something, and a long line formed after his speech, so families could meet
this remarkable man in person. I had long wanted to meet him, based on a recommendation
of mutual friend Barry Haarde; mission accomplished, and we are all the richer
spiritually for having met Shane.

This morning we held Pulse on the Road after breakfast. Not easy to
digest (insurance that is), our material was absorbed and contemplated by a
rapt audience. We covered the ACA and what’s happening in Tennessee. Michelle
Rice presented the NHF Insurance Selector Tool (you can download it at www.hemophilia.org, which I highly
recommend) and everyone got busy comparing two hypothetical insurance plans to
see which one was better. Many participants praised the tool as essential in
learning to master personal insurance.

Kelly Fitzgerald covered the Affordable Care Act (ACA) and what to
watch out for coming in 2014. Then we held our Community Forum, in which audience
members could ask questions of our panel of experts, which included Catherine
Joyce, social worker at a local HTC.

It was a great weekend, with a fantastic foundation and its attentive
and friendly hemophilia family members. Thank you, Mary Hord and team, for a memorable
visit!

Laurie Kelley June 4, 2012
It was a rainy weekend in Boston, and I was so sad I couldn’t join the Hemophilia Walk in Boston yesterday. But, I’m happy to say that New England Hemophilia Association surpassed their goal of $100,000! And this all happened in a downpour!

There are more walks happening all across the country to help raise money for hemophilia, for the local organizations who help us in our own states, for the National Hemophilia Foundation that lobbies for us and provides research, and even Save One Life, the nonprofit I founded, may benefit!

If you want to help kids with hemophilia, especially those suffering in poverty overseas, here’s how!

Bayer is sponsoring “Virtual Walks” throughout the year, from the comfort of your own home, and Save One Life, which now sponsors over 1,000 children and young adults with hemophilia in developing countries, may benefit directly from it!

Bayer is proud to announce the 2nd Annual Bayer Virtual Walk for Hemophilia! Committed to helping support those who live with bleeding disorders, Bayer, through the Virtual Walk, is offering sponsorship funds to the National Hemophilia Foundation* (NHF), its local participating chapters, and to the Save One Life Foundation (www.saveonelife.net). This year, the top 5 participating local NHF chapters with the most virtual walkers will receive sponsorship funds, as follows:

That’s a total of up to $70,000 in sponsorship funds to support the bleeding disorder community! Joining the Virtual Walk for Hemophilia is as easy as 1-2-3!
Participants simply need to:

If your local chapter is not one of the participating chapters in this year’s Virtual Walk, you can still be involved! Just choose to walk for the National Office of the NHF. You can then share your virtual walker on Facebook and invite everyone you know.

Another exciting feature we have added this year is that on the day of a chapter’s physical walk, any virtual walker created will count as double! This is a great opportunity for a chapter’s virtual walk ranking to benefit from bringing their community together.

Together we will help raise awareness for bleeding disorders across the country! (My two cents: And help directly those suffering in countries where no factor is available)

A crazed, young scientist named
Griffin has discovered the means to make himself invisible. With the power that
comes from not being detected (or so he thinks) he unleashes a reign of terror
in England. He begins to torment unsuspecting people, stealing, ransacking,
sometimes in a sadistic way. This is a very dark novel, extremely well written
of course—it is by the Master and Founder of Science Fiction himself. Griffin
eventually tracks down colleague Kemp, shares his plans to dominate the world,
and his malicious joy terrifies Kemp.

First published in 1897, The Invisible Man retains its
thrilling plot, pace and characters even now. It’s not as good as War of the
Worlds or The Time Machine, but it’s short enough to be read in a single
sitting, is stimulating, entertaining and sharp. The science behind how he
becomes invisible is great! The pace of the book pick up at the end to a great
climax. Four/five stars.