Laurie Kelley July 15, 2012
“Are you a madman or a guinea pig?” asked a man from France at the final symposium of the World Federation of Hemophilia Congress in Paris, France last Thursday. He addressed his question before the 500 or more
attendees in the huge amphitheater at the Palais de Congres to our own George McCoy, from North Carolina, one of the fascinating speakers on the panel debating and comparing long-acting factor to gene therapy. 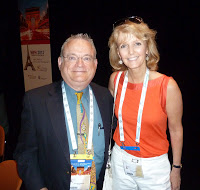 Great question, particularly as George had just revealed that he
was the very first human ever to be injected with recombinant factor VIII, back
in March 1987. I was riveted to George and his reply. The whole audience was. But more on that in a bit!
The session opened with Dr. Paul Giangrande, director of Oxford Haemophilia Centre in England and world-renowned hematologist, purposely supporting continued recombinant therapy, and listing the many pros of our current treatment. Paul reminded us of the Hippocratic oath Primum non nocere: First, do no harm, and cited the long and many years of improved quality of life and quantity of life on these therapies.
(Dr. Giangrande also prefaced his presentation with an outrageously humorous skit on how he gets roped into presenting so many talks at symposia, all seemingly taking contrary positions! He feels it is his duty to provide food for thought on the pros and cons of all treatment; here, he was asked directly by WFH to make a case for recombinant therapy)
Long acting factor, Dr. Giangrande said, which many manufacturers are working on, is based on recombinant technology, a stable and known technology, which is considered safe. It provides breadth of product for factor
VIII, IX, and inhibitor patients. WFH president Mark Skinner even said earlier at the Congress that treatment should aim for a trough level of 15%—which recombinants can provide. Giangrande added that we know the manufacturers
already so we know in essence from where the product comes and what we are getting.
Giangrande then cited some of the downside of what we know and can expect from current gene therapy, still in clinical trials: more hospital 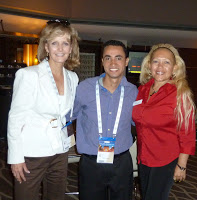 visits and blood tests. He asked if patients truly were giving informed consent. Most parents don’t understand what the studies involve. And he questioned the
ethics of using patients in developing countries in these clinical trials—there
are medical risks, and the patients could be desperate to have product no
matter what.
Will gene therapy really lower costs? Currently Dr. Kathy High from Children’s Hospital of Philadelphia is investigating a factor IX gene therapy treatment. If successful, Giangrande reminded us, it will be commercialized, just as all the past research in hemophilia has been.
Next came Dr. Kathy High herself, who reminded the audience right away that
the ultimate goal is to cure hemophilia. We aren’t used to thinking of cures for genetic diseases. Some have been radical, such as bone marrow transplants or liver transplants. But we have alternatives now. In a recent published gene therapy article, research in the UK showed that a single infusion led to more than 18 months expression of factor IX at
about 5% levels. This was repeated in two other patients. Unfortunately, eight weeks later one patient required steroids. While it looks like a virus vector may trigger an immune response, Dr. High felt that the risk of a short course
of steroids outweighed the risk of bleeds. Other risks noted included the viral vector appearing in semen; and one mouse model showed an increase in carcinoma (but he was an old mouse with lysosomal storage disorder! The things you learn at these symposia).
How long will this gene therapy last in the body? We don’t know. In dogs, over ten
years. And it only requires a simple infusion, with no organ transplant.
Dr. High posed the question on everyone’s mind: when will gene therapy happen for hemophilia A patients? High believes it will start in 3-5 years. Some studies are already underway, such as one with AV canine factor VIII, with Dr. David Lillicrap of Canada. High gave a positive and detailed summary of currently gene therapy—very exciting
presentation!
So back to George McCoy, who then spoke, eloquently, sincerely and humbly.  He described his childhood, and how he
was diagnosed at age two. One of four boys, his eldest brother Richard had
hemophilia for years and no one knew. Sadly, he died. George’s speech was
moving and thoughtful, especially when he cited WFH founder Frank Schnabel, who
described patients with hemophilia as “tortured pieces of human geography
confined to a wheelchair.” 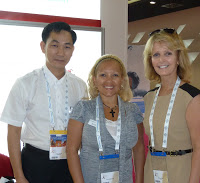 Dr. Gil White contacted him about being the first rFVIII patient ever in March 1987,
and hence the question: is he a madman or a guinea pig? George simply replied
that he would do it all again if he had to—he would volunteer for gene therapy
if—or when—the time comes. And he stressed that we need volunteers for gene therapy
now. 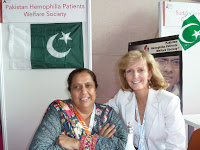 He closed with the beautiful thought: “What brings us here is the will to live, the
will to prosper, the will to learn. We all do need each other.” And while all
the speakers weighed in on whether they would elect gene therapy over
long-acting factor for their hypothetical grandchildren with hemophilia, were
they to have one, it was Dr. High who made a memorable statement: we need access to all therapies, both gene therapy and long-acting, for individual patients with
individual biological make-ups, for those in developing countries— access to all products and treatments for us all. George was right: we all do need each other, and this past week at WFH reminded us all that 300,000 have little or no access to hemophilia treatment. The burden—to me the joy— is on us to help them all.