Hurricane Sandy: Are You Prepared? 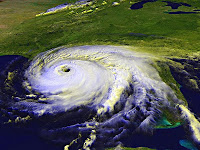 The eastern seaboard is being pummeled by Hurricane Sandy, a fast-moving, major superstorm that thrashed Cuba, hit Florida and is currently striking the New Jersey shore (it’s been downgraded from hurricane to superstorm now). A 35 year old man in Queens, New York was killed by a falling tree; the New York City subway was shut down; and major airline routes,  heavily traveled in the east, were cancelled. Long Island is facing historic, life-threatening, massive flooding, which will paralyze services. New York airports are closed and all flights, thousands, are cancelled.

I am in Tampa, Florida, visiting my youngest in college and am now stuck here a few more days. But if you have to be holed up somewhere from a hurricane, Tampa is a great place to stay.

First, know the geography and weather patterns where ever you live. California has many geographical faults that cause earthquakes. The midwest states of Texas, Nebraska and Kansas are dubbed “tornado alley” for their frequent and sometimes devastating tornadoes. The northeast has “nor-easters” every six years or so. And Florida absorbs hurricanes that often originate off the coast or in the Caribbean Sea.

In Boston, where I live, we know that September and October are hurricane season moths. Normally we are lashed with the tail end of a Caribbean-originated hurricane. We once had “The Perfect Storm,” the 1991 hurricane that originated on my birthday, October 28, and became a massive killer. Damage was most severe in Massachusetts; the story became a movie of the same name, starring George Clooney.

It sounds like common sense, but be prepared if you have a bleeding disorder. The most important thing always is to ensure you have enough factor and ancillaries. When storms hit, you often are not able to travel, and face power outages. Your factor supplier may not be able to bring you factor, and you may not be able to contact them. I think always keeping at least 10-20 doses in your fridge at all times, and plenty of ancillaries. Keep candles and flashlights ready, with fresh batteries.

Know your local emergency numbers, in case you need to be evacuated due to your medical condition. Callers have overwhelmed 911 services, so you may not be able to always reach help when you need it. Charge your cell phone! And charge your laptop and any device that can help keep your cell phone juiced.

As soon as you hear that a storm is developing, even if it is in Florida and you are in Massachusetts, get prepared for a worst-case scenario.  Keep updated at Twitter through @CNNWeather!

Great Book I Just Read
Rabid: A Cultural History of the World’s Most Diabolical Virus by Bill Wasik and Monica Murphy 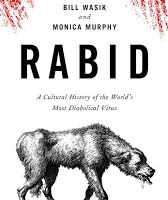 I love reading medical history books. This book traces the cultural implications of the world’s most insidious virus: rabies.  Nearly 100% fatal once symptoms exhibit, rabies travels directly through the nervous system rather than the more usual route of the bloodstream, allowing it easy access to the brain. Once there, it causes the host victim to be aggressive, biting animal or person who is hydrophobic, “afraid” of water. Tragic and deadly. The most prolific carrier of rabies? Bats.

The authors cover the role rabies has played in myths, legends, folklore and even movies. Rabies may be the origins for the legends of zombies, werewolves, and vampires; the first half of the book covers the history of its reputation (and dwells a bit too long on this, kind of losing its way). The second half is devoted to Louis Pasteur’s development of a rabies vaccine,  the only really effective method of stopping the virus, and is fascinating. Though the book is unevenly written, with gaps in the science, it’s nonetheless a good read and I learned a lot. Three/four stars.