Eye on the Summit!

This is a very special week in Hemophilia Adventure
History! On Tuesday, Chris Bombardier, a 27-year-old Colorado man with severe
factor IX deficiency, sets out to climb Aconcagua, a 22, 847 foot mountain
located in northern Argentina, near the border of Chile. It is the highest
mountain in the Americas, and is part of Chris’s unprecedented Seven Summits
climb. Unprecedented because no one with hemophilia has bagged all seven
summits—the highest mountains on each of seven continents.
Why is Chris doing this? How dangerous is it?

“Obviously I hope to summit,” the Denver native told me in a recent telephone
interview. “I also hope to raise greater awareness of hemophilia globally. Most
people in the States don’t even know about hemophilia; think about how little
is known worldwide. I think having someone with hemophilia pushing the limits
is a cool story in itself, but I hope it raises awareness of the discrepancy in
treatment.”

Chris knows something about that. He sits on the board
of my nonprofit, Save One Life, which is dedicated to assisting individuals in
poverty with hemophilia in developing countries. He also has helped establish a blood testing lab in Eldoret, Kenya.
“Physically, I feel good, strong,” says Chris, an avid
mountaineer and adventurer. Chris already has knocked off one summit: Kilimanjaro
in Tanzania, when he climbed in April 2011, becoming the first American with
hemophilia to summit it. He is using a long lasting factor in experimental
studies currently, which, he says, is working well. He plans to infuse on the
mountain as needed.

Chris will be climbing the
Ameghino/Upper Guanacos route with a traverse and decent down the normal route.
He’ll be climbing with two guides and eight other climbers. Chris’s climb is
being funded by LA Kelley Communications.
“We
start the climb on Tuesday, January 29th with a hopeful summit day around February
7th or 8th, says Chris. “I posted a thorough itinerary of the climb on
my new website and blog.” Chris also hopes that he inspires people to donate to
Save One Life; while his climbing costs are covered, every penny he raises goes
to helping run Save One Life, which serves over 1,000 people with hemophilia
who live on about $1 a day.
While in
Argentina, Chris also hopes to meet the Hemophilia Foundation of Argentina, one
of the world’s first hemophilia nonprofits and one of the best run. Carlos
Safadi, a lawyer with hemophilia who sits on its board, also serves on the
executive committee of the World Federation of Hemophilia. Carlos writes, “It will be my pleasure to welcome
Chris to the Foundation.”
Check
out www.adventuresofahemophiliac.com  to read more about Chris and his
momentous climb! And show your support by making a donation in any amount to
Save One Life!  www.saveonelife.net 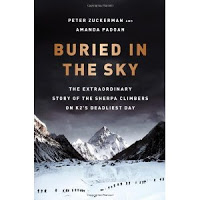 Great Book I Just Read
Buried in the Sky: The Extraordinary Story of the
Sherpa Climbers on K2’s Deadliest Day [Kindle]
Peter Zuckerman, Amanda Padoan
The worst accident in the
history of climbing K2, the second highest mountain in the world but known as
the most treacherous, happened on August 1, 2008, when 11 mountaineers from
international expeditions died. What sets this true story apart from other
mountain climbing stories is that it is told primarily from the sherpas’
point-of-view. The authors get inside the mind-sets of the sherpas who brought
the many clients up the mountain that day; their lives from childhood are
replayed, revealing their sterling character, and how most escaped dire poverty
to become rock-stars of the climbing world. But the “goddess” of the mountain
had other plans for the unlucky climbers: reaching the summit too late in the
day, the return became a race against the dark, the cold when disaster struck.
An avalanche buries the lead ropes, scattering the climbers, leaving some suspended
upside-down all night long, others to walk over the edge, and still others to abandon
their fellow climbers. It’s a tragic tale, masterfully told with great
compassion and in-depth focus on each individual. Most fascinating to me were
the many references to the Nepalese sherpas’ faith in the goddess of the mountain,
and the Pakistani guides’ Islamic faith and how their faiths led them to assist
the many climbers and other guides in trouble, putting their own lives at
terrible risk.  This story of
heroism and yes, hubris, was a page-turner, and I finished it in two nights.
Four/five stars.