Lest We Forget: Ryan White 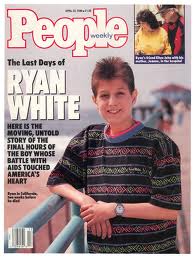 This morning my friend, Barry Haarde, and many of those on Facebook reminded me what a special day it is. The anniversary of the passing of one of the heroes of the HIV/hemophilia community, Ryan White.

I recently met someone my age who had never heard of him. It seems hard to believe, given that he was a pioneer in advocacy for the rights of those with HIV, at such a tender age. And HIV in the 1980s was paramount to the plague, the Black Death, sweeping the country and causing people to react with fear, superstition and discrimination towards those who contracted HIV.

Ryan was born December 6,1971, to Jeanne White, in Kokomo, Indiana, who learned three days later that her baby had hemophilia. Treatment then consisted of factor concentrate injections which were not pasteurized or treated to remove viruses. Shortly after surgery on his left lung in 1984, doctors informed Jeanne that Ryan had contracted HIV. At age 13, Ryan was given six months to live. 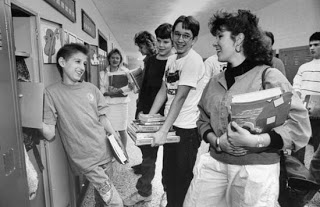 What we didn’t know then and what we know now staggers the imagination. No one could have made up a sci-fi story as incredible as a microscopic virus infecting the entire nation’s blood supply and leading to the deaths of 10,000 with hemophilia. Ryan was one of them, and one of the most famous. Why?

His fame stemmed from how he handled discrimination in the Indiana school system, which would not allow him to attend classes. Ignorance about the disease caused mass panic and hate crimes. Ryan was shunned, harassed; one night a bullet was even fired into his home.

Ryan and his mother took the school discrimination case to court. Eventually, Ryan won. He was allowed to come back to school. But, people’s minds didn’t change so quickly or with the court decree. Ryan continued to face harassment by schoolmates, and parents pulled their children out of school. Ryan faced it all with characteristic grace, dignity and acceptance. 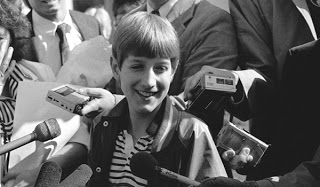 Ryan eventually found a school that welcomed him in Cicero, Indiana:
Hamilton Heights High School. He thrived there.

His story of courage found its way to the media, and Ryan became a celebrity. A made-for-TV, a biography, many television spots…. and even friendships with Elton John and Michael Jackson. Ryan was hemophilia’s earliest advocate: on March 3,
1988, Ryan spoke before the national commission on AIDS, about hemophilia, HIV, discrimination. It’s fair to say this child–a suffering child–changed the way everyone viewed HIV. He was a pioneer, a role model, and transformational leader.

He died on April 8, 1990, Palm Sunday, surrounded by Jeanne, his sister Andrea, his grandparents and his friend,
Elton John. Jeanne remains fairly active in the hemophilia community and attends various events to remind us all of the importance of advocacy. Ryan’s impact goes far beyond his short time on earth, and he will eternally be remembered as a compassionate child who suffered, transformed his suffering into a mission for a greater cause, and left a lasting legacy so that others could avoid the discrimination he endured. His life is a blueprint of hope and courage in the face of alienation and pain, like so many others in our very special community.