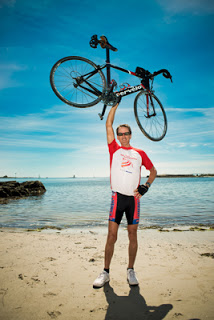 Barry the Biker is at it again…. riding clear across America to raise money for and public awareness of hemophilia!

Barry Haarde is a 47-year-old with the stamina and ambition of a 20-year-old athlete and the soul of an ancient sage. He also has hemophilia and HIV, and lost a brother with hemophilia to AIDS. He conceived the idea to ride across America two years ago, and completed one trans-American trip last summer, covering over 3,600 miles in 7 weeks. You can read about that exciting journey in a previous blog.  https://www.blog.kelleycom.com/search/label/Barry%20Haarde

This year, he does it again, but in only 30 days! Starting from Costa Mesa, California, Barry will ride an average of 110 miles a day,  through the southwest and plains, to arrive after 3,456 miles in Amesbury, Massachusetts on May 23. This is also the day of our annual Spring Gala for Save One Life, the beneficiary of Barry’s fundraising. Barry plans to attend, as soon as he hops off his carbon-framed steed.

Each day of his trip, as he did last year, Barry devotes to someone with hemophilia who died of HIV. He posts daily on Facebook. If you are friends with Barry on Facebook, you will be reminded of each beautiful man who died. What a tribute! Does anyone anymore put this kind of thoughtfulness into action?

Last year Barry raised about $50,000 for Save One Life, the child sponsorship program for children with hemophilia in developing countries that I founded. This year he hopes to raise $35,000. Please consider sponsoring Barry in any amount. Thanks to Baxter Healthcare, our Gold sponsor!

Freddie Mercury: The Definitive Biography [Kindle] by Lesley-Ann Jones
I’m on a Queen kick since I witnesses the amazing performance of Gary Mullen and the Works as the Queen tribute band a few weeks ago. I always liked Queen but now love them and appreciate them even more. This is an in-depth look at one of Rock’s most intriguing and talented front men, Freddie Mercury, who is often cited as the greatest vocalist in Rock history. Certainly no one could match his range. This book is a great first look into his life, from a childhood on Zanzibar (I actually saw the house there he grew up in) to his life at boarding school, the roots of his neediness for praise and adoration, the strange duality of his nature–and not just his bisexuality. He was complex, talented and self-destructive. And a showman all the way. His personal charisma, charm and intelligence are clear. This is also about Queen, probably one of the most educated of all Rock bands. Life on the road, Freddie’s affect on the band, how they grew in influence and hit the heights. Those of you who watched Live Aid will recall how Queen stole the show. Their live music far surpasses their recorded. Freddie adored opera and even produced “Barcelona,” an album with his favorite opera diva. You’ll learn about the history of the band, and Freddie’s sad demise to AIDS in 1991. Great read. Four/five stars (but then I am biased)