So this is all Barry Haarde’s fault.

Let me explain. A year ago I was a contented jogger and sometimes mountain climber. Not often, but enough to say I can do
it. I also cycled about once a week using an old hybrid bike, which means that
it’s not as slick as a touring bike (those skinny bikes with skinny people
riding them who have Lance-Armstrong-like ripped muscles and wear cool shirts)
but not as bulky as a mountain bike (which have really thick tires and usually
young, crazy males riding them through forests). I wasn’t too competitive.
Then Barry just had to go and cycle across
America in 2012 (3,700 something miles) to raise money for the nonprofit I founded,
Save One Life. And when he hit New York, he emailed me that I was going to ride
the last 50 miles with him to dip our wheels in the Atlantic Ocean, at Rye
beach, in New Hampshire, not too far from where I live.
Oh really? I couldn’t refuse; he shamed me into
it.
So I did have a top-notch Spanish touring bike, an
Orbea Diva, though dusty and stiff, hidden in a closet. It was in storage for
the past four years, after I bought it as a consolation prize when I turned 50,
fell in the middle of the street on its maiden voyage, and put it away, too
sacred to ride it. Well, that’s all chronicled here.  https://www.blog.kelleycom.com/2012_08_01_archive.html 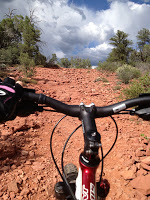 Today, I continued what has become an addiction. (Yeah,
Barry, an addiction! You knew this was going to happen.) I hopped on my baby (the
Diva, which used to give me nightmares as it sat eerily waiting for me in my
cellar closet, like some haunted, phantom thing from a Guillermo de Toro movie)
at 9:30 am and headed out for Route 1A, and cycled along the Atlantic sea coast
for over four hours, covering 64 miles, the most I’ve ever done. Yes, it hurt
after a while, but you just can’t stop it. Whatever it takes.
Last week, if you are friends with me on Facebook
(you are friends with me, right?), you might know I spent four days solo in Sedona,
Arizona, where I indulged my new addiction. I checked in last Sunday into my
hotel in Sedona, a mere two hours after the Arizona Hemophilia Association
meeting, and almost immediately went for my first mountain bike trip. Why? I
was surrounded by majestic Boynton Canyon, with the desert and all its twisting, red-dusty
paths calling to me. Something different and new. And kinda scary. Mountain
biking is very different than touring biking. It’s like the difference between riding a Mustang with an attitude using a Western-saddle, and sitting all pretty and proper on a fast thoroughbred (well, not that fast when I am on it) on an English saddle.
The day was hotter than I thought, and it would
be easy to dehydrate. I slipped on a new backpack, very small, with a built in “Camelback”
water pouch. This has a tube connected to the “bladder” (I know, sounds gross)
from which you can easily drink water. I set out on the bike, hit “Deadman’s
Trail” alone, and pounded my way through red dust, over lots of stones and
sand. Sedona sits at 4,500 feet, and my heart was soon thumping in my chest. To
my left, the massive sandstone wall of Boynton Canyon, with towering red rocks.
Cacti and scrub bushes fringed the trail. After 30 minutes, I felt I was in the
middle of nowhere, alone… the path was steep. I stopped, chickened-out (it is
DEADman’s Trail, after all), and decided to turnaround the way I came: downhill, rocky, exciting!
My heart was pounding furiously, meaning that I
was overheating. It was trying desperately to circulate overheated blood from
my midsection, where it was “cooking” my internal organs, to the extremities. (I
recall all this from my Outside magazines, when I used to enjoy reading about
other people doing stupid things outside) This is about the only cooking I am ever successful at. Rest in the shade and water would take care of that. I took off my helmet, and my backpack, to allow my sweat to do its
job and cool me.
The next day, after four hours of hiking Bear Mountain
and Devil’s Trail in the 96-degree heat, in which I drank perhaps more water
than in my whole life combined, I actually went for another mountain bike ride,
on Cockscomb Trail. Who would be crazy enough to do this
after such long and superheated hikes? People with bicycle addictions.
George, the Native American guide from the bike
rental shop, gave me excellent tips on biking the trail. It was much better
than Deadman’s Trail; more trail than steep rock steps, exciting. I found the
trail head off the highway, entered, and was frustrated to stop a few times as I
didn’t have my rhythm down yet. Don’t power up the hills, George had said.
That’s what you “touring” people do. Just sit back, go in your easiest gear,
and pretend you are walking “up” the hill. The hill with lots of rocks, you mean?
Yes. When I got through the rocky
part, the trail smoothed out and became like the Run Away Train ride at Disneyworld. I marked the trail as I went with the contents of my stomach. I guess I pushed myself too hard and was so spent. But it was fun!
On Wednesday I wasn’t sure at first how to start
my last day. Swim in the pool? Attend the yoga classes? Leisurely breakfast?
Nope. Up at 6:30 am, made some tea, ate a banana and some berries, checked email,
wrote to my daughters to tell them to come and find me if I disappear, threw on
my riding gear and headed to the Activities Shop. By 8 am, with some cloud
cover thankfully, I pumped down the road, to the Fay’s Canyon trail head, and dove into the
outback again to Cockscomb. I was going to nail it this time, and make George
proud of me. No more walking my mountain bike. I did so much better; only had to stop twice as opposed to three or four times on Sunday. At
times I felt like I was on a runaway horse, recalcitrant and skittish, as I
bounced over the rocks, fishtailed in the red, fine dust, and then rolled up
and down the roller coaster trails. It was challenging, exhilarating,
dusty, dirty, sweaty. And did I mention addictive? 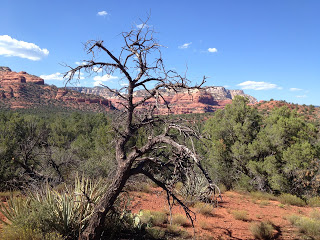 After that, I came back out to the road, and then
pedaled back towards the hotel, first taking a side tour to Deadman’s Trail again,
determined to see it through the end. It was so much harder than Cockscomb, but
I did much better this time. I actually pumped up the first very hard incline,
with many rocks, doing just what George had suggested. And in 20 minutes got to the tricky part where I gave up on
Sunday. It was better after that, but still challenging. It suddenly got scorching hot as the sun rose, and I was sweating and drinking tons of water. I felt like I
had leaks in my skin. Water in, water out. I had to stop now and then, and rest
or walk the bike. At one point, the bike seat (which had a loose part to it
that stuck out) caught on my shorts, tore a small hole in them and wouldn’t
allow me to hop off when I needed to, so down I went in the dirt, the bike landing on top. The handlebar
jammed into my thigh, causing instantly a raised hematoma. Ouch. At that very
second a runner swept passed me (out in the canyon?), a Matthew McConaughey
lookalike, tanned, trim, ridiculously handsome and fit, and half naked. We said
hello… instant painkiller. Back on my bike, finally reaching the road, and aimed for the turnoff for my hotel.
But I didn’t want to
go back, as it meant I had to leave tomorrow for Boston! I still had half an
hour so I swung the bike around, pedaled back
to Cockscomb Trail and did it again, and this time only stopped once! It
was such a great feeling. I was so incredibly hot, my heart was pounding, sweat
pouring out of me, my legs all banged up and bruised, and I never felt better
in my life. (Well, maybe if I saw Matthew McConaughey’s
look-alike again)
After the
64-mile ride today, I came back, lay on my bed still in full biking gear, and
passed out for an hour. How will I make it to 100? Because I have to do 100.
What good is an addiction if it doesn’t keep pulling you to push the envelope?
So here it is:
On September 21, I will ride 100 miles to raise money for the Springfield
Police Department, in honor of Officer Kevin Ambrose, who was killed in June
2012 in the line of duty, the first officer in that city in 25 years to die in
action. My brother Tim, also an officer, was a good friend of his. So he and I
will ride together, along with 200 other officers, with a full State Police
escort. I might need it.
And, Barry, who
got me into this mess to begin with, is going to ride with me, Kimberly
Haugstaud (executive director of Hemophilia Federation of America), Vaughn Ripley, and Allie Boutin
of HFA (and a neighbor of mine!) and more, to raise funds for HFA on September
27. “Gears for Good.” Want to sponsor me? Take pity on me and my addiction, and
think of a pledge. It’s all for a good cause—for HFA. And it’s only a few days
after my 100-miler (my “Century”)—so I will be primed and ready! Or totally
passed out somewhere in my gear. What I fear most is not the these two rides,
but Barry whispering how I should do the cross-country ride with him in 2014… Barry,
it’s not nice to take advantage of someone with an addiction!
Donate here….   http://www.razoo.com/story/Gears-For-Good-2014
Book I Just Read
The Places in
Between by Rory Stewart [Kindle]

This book was a best
seller, and recommended by my favorite magazine, Outside. In 2002, Rory, a
free-lance writer, decides to walk across Afghanistan just months after the
Taliban were deposed, retracing the path of a former and ancient ruler, Babur. He
claims to be researching a book about Afghan history and Babur, but this book
is mostly about the people he encounters and the extreme physical hardships he
endures. The problem is his writing is mercilessly dry, without emotion or
sentiment, and seemingly for no purpose. Why does he undertake this trek? Just
to see if it can be done. There is no setting up of girls’ schools, as in Three
Cups of Tea; there is no bonding of humans who endure outside exposure and
survival. There is barely even a bonding with the faithful and suffering dog he
adopts and who accompanies him. While he does have potentially an interesting
story, it is told in such a way as to make the reader wonder why he or she is
reading it. To what point? There seems to be none. And there is no excuse for mediocre
writing; Rory had plenty of time alone to conjure up literary references,
flowing of words, rhythm. It’s flat, uninspiring writing. I learned a bit about
Afghanistan but didn’t enjoy the trip much. Two/five stars.