A Memoir of Pain, and Hope 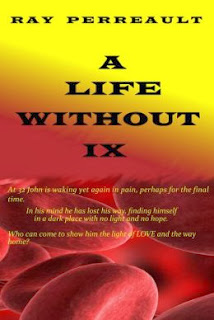 I love discovering new people in our amazing hemophilia community, along with their talents and accomplishments. So I was delighted when Ray Perreault contacted me this year to introduce himself and share a new book he self-published. Ray has severe factor IX deficiency, and his new book, A Life Without IX, is a memoir. To Ray, this is simply a memoir of his life, but his life has been one of unmitigated pain and suffering. He tells this book (mostly) in the third-person, through a character named John. John’s life is Ray’s life. And it is remarkable.

The 173-page book details what it is like to live with chronic, torturing pain, from bleeds treated with plasma, to the “Miracle,” factor IX concentrate. I’ve read people’s stories on pain before, and I have to admit this is the most carefully constructed, detailed recollection of enduring waves of pain that dominate your life that I have read. While reading, you get inside the mind of “John,” experiencing what he experiences. What do people in searing pain think, how do they strategize how to move across the room, what do they dream of at night?

The book covers childhood, high school, adulthood, even a first marriage that brought even more pain to John’s life, then the birth of his child, and at last a second marriage, which brings joy. A book like this will expand your concept of what pain is, and being fresh appreciation for those struggling to survive it minute by minute, day by day.

Ray Perreault is a survivor who deserves the highest respect. His wife summed it perfectly in the book: “You always had the courage to bounce back…it’s the most
amazing thing about you.” Resilience in the face of crushing and crippling pain, strength in the face of the negative attitudes and discrimination of “others.” Do not read this book looking for lofty inspiration, though; it reads like the no holds barred memoirs of a war veteran who has seen the worst in battle. But through it all, there is a human spirit that subtly rises above it all, and that embodies itself in this book.

I am also an author and editor and so cannot conclude with a few caveats. Self-published books often have their share of problems and glitches, and so it is with this book. Layout: expect many big gaps and white spaces (half page sometimes) in the book where the text flow did not get corrected. Copy: some grammatical errors, many stylistic inconsistencies. Content: the subject matter is vitally important and the story is basically good. But it rambles, and is confusing. It bounces about chronologically.  Why Ray chose to tell it in the third person is a bit of a mystery, and the voice changes sometimes from third-person to first-person with no explanation who the narrator is. But most importantly there is a lack of medical information (HIV is barely explained, leaving too many questions; factor IX is incorrectly explained and referenced; hemophilia is not adequately explained).

My advice is to read this for the story of the man, and it is a story that deserves to be told. It’s a story of perseverance and courage, fortitude and hope. With thorough, professional editing, this book would carry even more impact than it already does. Well done for a first book, Ray!

Keep up with Ray on his blog: http://blog.raymondperreault.com