I changed plans for my blog tonight after burning out from too much computer work to go to a  matinee movie. What to choose from? I could easily recommend Captain Phillips or Rush… both excellent. But I chose Ender’s Game, not expecting too much. It’s received 62% on the “Tomatometer” (know what that is, everyone?), not exactly stellar (no pun intended). 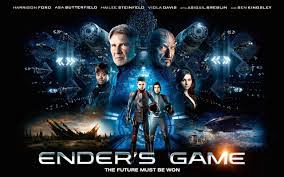 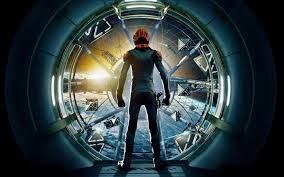 I thought this was going to be a purely sci-fi, CGI, blow up the aliens tale, but it’s much more than that. Yes. It does proceed slowly with the plot, focusing on character development. The real action doesn’t take place until the very end. It’s gotten its share of criticism for a variety of reasons, but… I liked it!
I liked that it’s about children applying themselves, finding value in their studies, discovering a higher calling. It’s a movie about leadership and youth; what does it take to be a “leader”?
A variety of youth leaders are portrayed, from different genders to nationality and races: Ender’s own sister, talented like him in her own right, was deemed “too compassionate.” Another leader, short and muscular, was too aggressive and demeaning, authoritative. You wonder about Ender himself—yes, he’s smart, but can he get people to follow him?  Over the course of the movie, you watch how he develops his own leadership style, and matures into a true leader, demonstrating strategy, psychology, risk-taking, challenging the status quo [his elder leaders], accepting responsibility when things go wrong, and most of all, honoring his own values. These are all important ingredients to making an effective leader. He embodies all three styles of leadership: positional, situational and transformational. For that alone, the movie should be seen.
Especially by hemophilia youths. We’ve been hearing for a long time that we are victims of our own success. When you have aliens threatening the earth (or HIV threatening the blood supply) you can more easily mobilize an army to do battle—and leaders arise from the masses to spearhead change. When things are cool, good, life is chillin’, it’s harder to get people to train, study and implement leadership for when things don’t turn out right in the future. During a crisis is not the time to study leadership for the first time. we’re victims of our own success; we no longer have an alien to fight, or do we?
Healthcare reimbursement maybe? Could be. Those of us educating and fighting for access to therapies, and lowered copays are not the ones who will be needing this in the future; it’s our kids. They are the ones, the “Enders” we need to enlist now. Teach them how to do battle in the Battle Room while we still have our own Rackhams (starring Michelle Rice maybe?) with us? Something to think about.
In any case, bring your child to see this movie, and talk about leadership afterwards. There is a lovely twist at the end that brings it all together as a feel-good movie. Ask:
What traits make for effective leadership? Is it a popularity contest? What hurts about being a leadership? What do you stand to lose? To gain? Who are your child’s admired leaders? If they are stuck on sports stars, broaden their vision of who and what a leader can be. And let him or her know that the hemophilia community has its leaders too… who will one day need the youth to come forward, like Ender, to plot new courses in our universe, to protect our community from invaders, both pathogenic and economic.