Under the Tuscan Sun: A Company Branches Out

If you’re my Facebook fan, you might know
I spent last week in Italy. I know, poor me. It was quite a change from two
weeks in India. All I need is Indonesia and I will have done my Eat, Pray, Love
hemophilia pilgrimage. Except I managed to eat in India, pray in Italy…. The
rest has yet to be seen!

I spent a few days in Florence before
heading slightly north for the real purpose of my trip. Florence is a city I studied
intensely as a teen. While other girls were going to dances, I studied the
Renaissance and became quite an “expert” at a young age. I copied paintings of
the masters, as I loved art, and when I first arrived at age 17, knew more
about where to go than our high school guide. So returning for my fourth time,
I resolved to wander the streets and churches, revisit the masters, and stand
in awe of the treasures of Italy. Nothing man-made captures my stunned, silent
respect and worship like the statue of David.
On day four I headed to Lucca, to visit a
pharmaceutical company called Kedrion. Kedrion came to our attention in the US a few years ago when it was contracted by Grifols to handle distribution of Koate-DVI, a
plasma-derived factor VIII product. Originally produced by Bayer, it was
divested, along with all the Bayer plasma division, to Talecris. Eventually
Talecris was bought by Grifols. But the US government, leery that Grifols now
had two plasma derived FVIII products, required Grifols to have a different
company handle distribution of Koate-DVI. Enter Kedrion.
Kedrion may be new to the US, but not to
Europe. Kedrion is a leading global pharmaceutical company specializing in the
development, production and distribution of a wide range of protein products
derived from human plasma. The company’s products are used to treat hemophilia,
immune deficiencies, infectious diseases and other serious medical conditions in
over 60 countries. The company owns four production facilities: two in Italy,
one in Hungary and one in the United States (currently leased to Grifols).
I was thrilled to be offered a tour of
the production plant. The plant is nestled among the Tuscany hills in Lucca, an ancient
city famed for its fortress-like walls that protect the denizens, once Romans
in 180 BC. The scenery—snow capped mountains rolling away to the sea; petite,
puffy clouds touching down on factories and churches— is breathtaking from the
patio of the Renaissance (how appropriate) hotel, perched on a mountain and once
owned by the Marcucci family, which also owns Kedrion.
I had dinner the night before the tour
with Paolo Marcucci, CEO of Kedrion, and wife Paola Pardini, whom I have met
before and who sponsor 17 children through Save One Life. With us was also
Danilo Medica, Italy country manager for Kedrion, who I had also met before at
a WFH event. Social events are always lovely with Italians, who know the fine
art of socializing, eating and drinking, and offering sincere and mutual respect
and hospitality.

So my purpose in visiting was to see the
plant, and learn more about this newcomer to the US market. Also, Kedrion has
been for a few years now our largest single donor of factor products to
Project SHARE, my factor donation program. We are now collaborating on ways to
secure even more factor to donate to the regions of the world where the 75%
live—those people with hemophilia with little or no access to treatment. Like…
some of the places I had just seen in India.

First, a snapshot: Kedrion was founded by
the Marcucci family; current CEO Paolo is son of the founder. It offers technology transfer of plasma collection to Macedonia,
Turkey, and Iran, as well as plasma-derived product sales to about 60 countries. It has 15 plasma
collection centers (nine of which are in the US). About 95% of its products are
plasma derived. Kedrion is one of the few factor manufacturers that is
considered part of a government healthcare system. About 75% of the company
is owned by the Marcucci family; 25% is owned by government.
Kedrion experienced enormous growth in the
past few years. Its business used to be only in Italy until just 2007; now it’s
been global for five years. A dominant 60% of its business is international,
part of this switch attributed to production acquisition sites in the US. It
has a FV product in the pipeline, even though there are only 5-6 patients with
FV deficiency in Italy. Clearly, Kedrion continues to have its eyes set on the
world.
And hemophilia in Italy? There are 3,481
hemophilia A patients; 1,688 are severe, 1,320 mild, and 473 moderate. In 2013,
FVIII consumption was about 555 million IU, with plasma-derived product use
actually increasing, driven by IT therapy for inhibitor patients.  Still, recombinant products dominate the
hemophilia market, at 66% of sales.
PLANT
TOUR 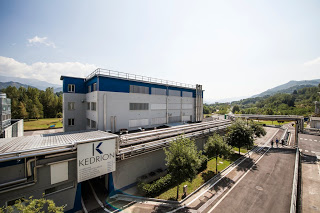 On a frosty Wednesday morning, I removed my jewelry, washed my hands thoroughly, suited up, and entered the plant with my
hosts, to tour how plasma products are made. The plant fractionates 1 million
liters (about 264,172 gallons) every year, using 24,000 liter tanks. First I
watched a film on the plant: how plasma arrives, is checked, monitored and
inventoried. How plasma is separated by centrifuge creating cryo paste for
fractionation. There are 480 employees in Lucca, and the plant operates 7 days
a week, 24 hours a day. It will be closed over Christmas for maintenance and
cleaning. The instruments and suites where products are made are cleaned daily. 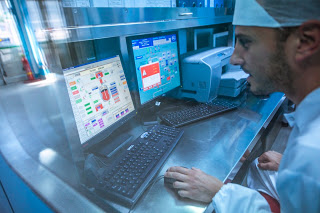 On this tour I was able to watch albumin
being made. Albumin is the part of plasma used to bulk-up factor concentrates,
to allow them to be injectible. Alessandro, plant manager and our guide, explained
about different classes assigned to manufacturing suites (A-D), based on sterility
and cleanliness. As each product goes through each manufacturing phase, the
requirements for cleanliness gets more and more complex.

It’s not
just that things must be sterile. In the suite, people come and go; there is
air, exhalations, and ventilation. The air itself, pressurized like in an
airplane, to push air out if there is a breach, must be monitored constantly. You
want a low level of environmental pollutants such as dust,
airborne microbes, aerosol particles and
chemical vapors. Levels of contamination are specified by the number of
particles per cubic meter at a specified particle size. Instruments protruding
out of the wall measure constantly the ambient air, and would signal an alarm
if the air contained undesirable things in it at a level considered potentially
harmful. 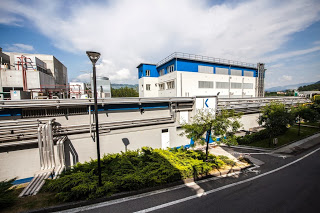 We watched as lab employees handled the
sterile vials into which the albumin would be placed, all by machine to reduce
human contact. The rubber stoppers were placed, and the machines sealed it with
the foil. I learned something new: I always
thought the rubber stopper might be at risk to cause a breach of integrity of the vial
if the vial got too hot or cold. But Alessandro assured me these stoppers are
powerful and not likely to contract or expand with different temperature. It
really is about temperature control to keep the protein from degredating and
becoming less effective, less powerful.

Speaking of power, the plant must have
power at all times. What of there was a black out, someone asked? Kedrion is
self-sufficient in power, Alessandro explained. They produce energy themselves
using methane gas production.

Last, we learned about the “KQP”: Kedrion
Quality Program, an eight step system, using among other things, regular
qualified donors, NAT testing, pathogen inactivation, and TSE agents, to assure
that the products are safe.

The Italian Health System is complex,
making me realize we aren’t the only ones with healthcare budgetary woes. With 19
regions that are traditionally independent, 645 public
hospitals, 50 HTCs, and an ongoing economic crisis, the federal government is trying
to consolidate hospitals, and is asking for additional cost reductions from
industry. And yet Kedrion must continue to fractionate Italian blood and return
plasma-derived products back to the various regions.
One concern is that Italy’s not
self-sufficient in any product. Consumption is growing faster than production, but
consumption includes imported products at much higher per unit prices. In the
face of an economic crisis, slashed healthcare budgets, the question is: can
Italy use the products it has already to alleviate demand? 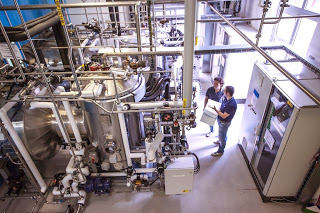 So that’s the point of my visit: in April
2013, Italian laws have changed regarding plasma. Previously Italian plasma had
to be used by Italians, but now the law allows Italian regions to recover costs
by selling the plasma products to other countries. Or maybe, donating? To India,
to Africa? We will see.
The name Kedrion comes from the Greek
language for lemon tree (or juniper or citrus, depending on your source). Its
symbol represents the deep roots Kedrion has in Italy, where the company was
built on Italian plasma and by a family dyanasty, and its branches go out into
the air, the world. I’m hoping they continue to branch towards developing
countries, to patients waiting to know this unique company and benefit from its
products.
To learn more about Kedrion: www.kedrionusa.com
Great Book I Just Read
Brunelleschi’s Dome by Ross King [Kindle] 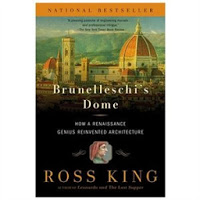 The perfect book for reading while in
Florence. My hotel was about 200 feet from Santa Maria del Fiore, and when I
stepped into the cobblestone streets each morning, the massive façade, capped by the
astounding dome, greeted me. This book goes into great detail about what it
took to create the 37,000 ton dome, one of the largest cupolas in the world,
completed in 1436. It took 16 years to complete (over 100 for the Cathedral itself!),
and the architectural construction was filled with competition, craftiness and creativity. Brunelleschi
invented all kinds of new ways to transport marble, to hoist the marble. He was
a genius of architecture, and this Dome today still awes and impresses. This
story is compelling, and shows the potential of man to create and persist. Brunelleschi
was foiled many times, faced many obstacles, but finished it, leaving behind
one of the most prominent and important symbols of the Renaissance. A must read
for anyone going to Florence. But a fabulous book on any account. I climbed the
436 stairs to the top and was rewarded with a breathtaking view of Florence, one
of my favorite cities. It boggles the mind how this could have been created, at
such a time, with such vision. You’ll never look at a church steeple or
basilica the same again once you read this. Five/five stars!