Ride to Remember 2014: Honoring the Fallen 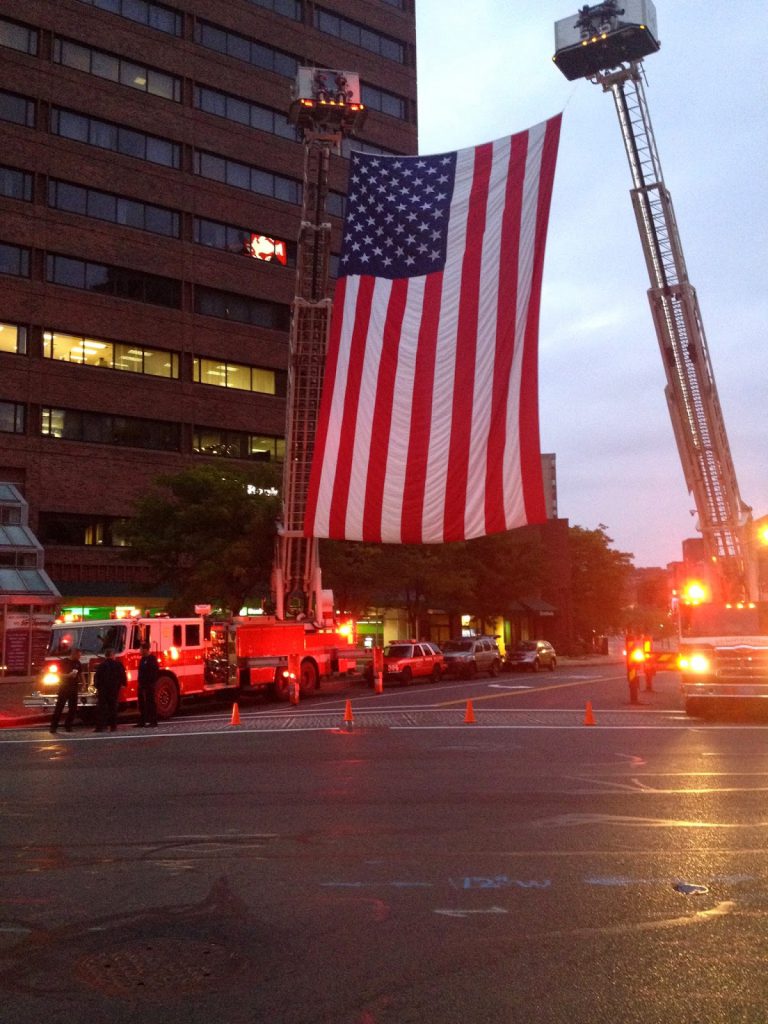 Whenever I see an
adult on a bicycle, I have hope for the human race. ~ H.G. Wells 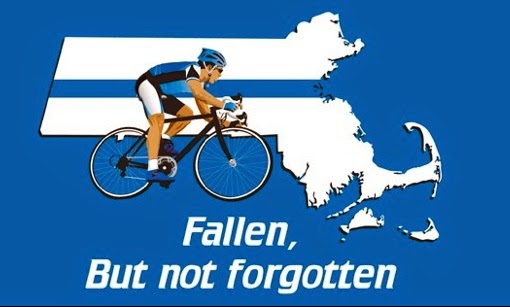 Hope for the
human race was abundant Saturday morning downtown in Springfield,
Massachusetts, where 240 cyclists of all ages, races, genders and professions
lined up to cycle 106.7 miles to the State House in Boston. This was the second
annual “Ride to Remember,” to honor fallen police officers and to raise money
for their families. “Fallen but not Forgotten” was the slogan, printed on the
back of the 240 riders’ uniform shirts, colored police-blue.
I scanned the swelling crowd at 6:15 am: the riders’ adrenaline flowing; the air
chilly and moist; the bikes being unloaded and tires pumped; the massive
American flag unfurled from two cranes in the semi-dark; the dawn just breaking
over what would be a perfect-weather day for an endurance ride; support buses queueing
up and repair vehicle positioned in place.
I was riding with
my younger brother Tim Morrow, a 30-year veteran of the Springfield Police Department,
now a K-9 officer, his wife Lee, on her first “century” ride, and my boyfriend
Doug, a marathoner and endurance athlete. The riders were police officers,
fire fighters and family members from all over Massachusetts. 106.7 miles later we
would be at the State House for a ceremony to honor the fallen. 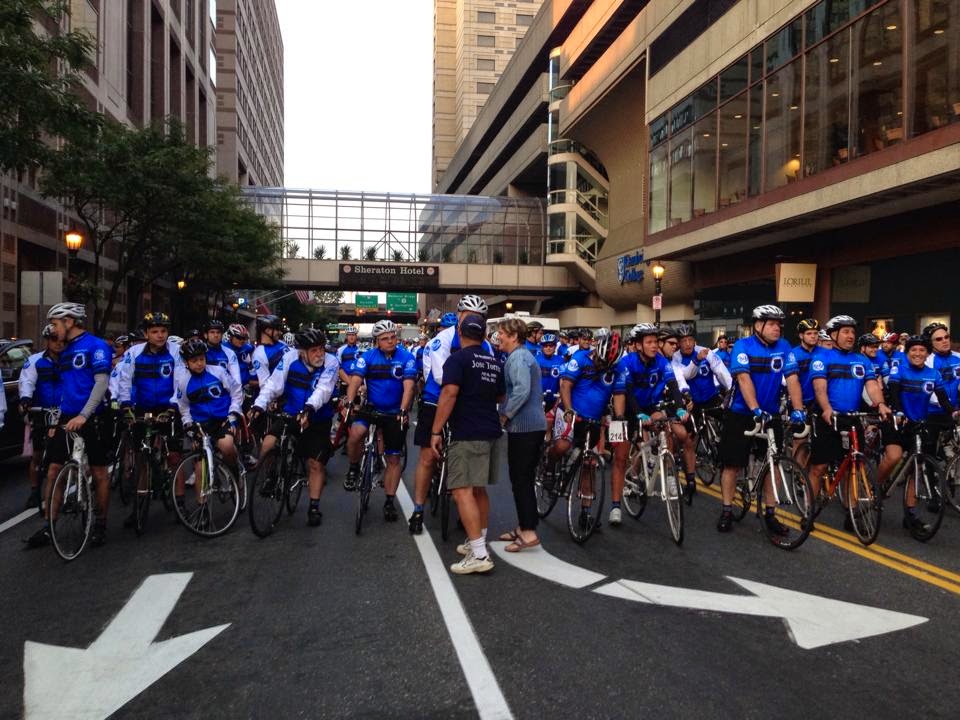 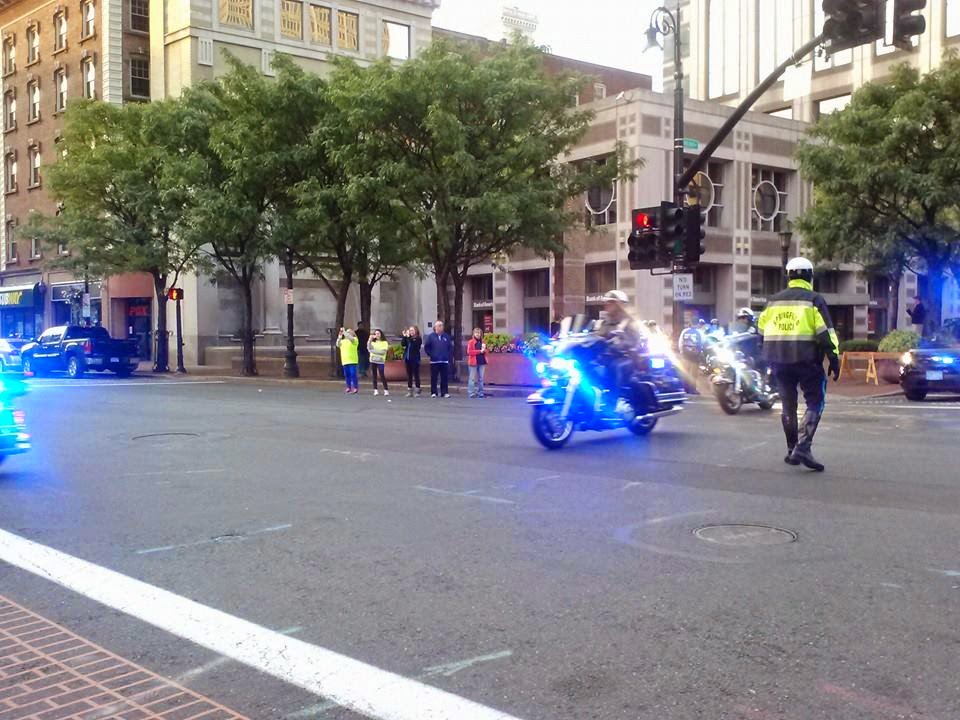 The Ride to
Remember honors officers Kevin Ambrose and José Torres, both killed in the line
of duty two years ago. Kevin was the first Springfield officer killed in action
in 25 years; he was just about to retire, but was killed while helping with a
domestic abuse case. It’s a chilling reminder to those of us who take the law
enforcement for granted about how dangerous these jobs are.
Despite the nippy
air and early time, I was grateful to see my sister-in-laws, Kathy and Polina
Morrow, who came to hug us and wish us good luck. And my 82-year-old mother,
Eileen Morrow! She probably should have been riding with us, as she has enough
energy and willpower! 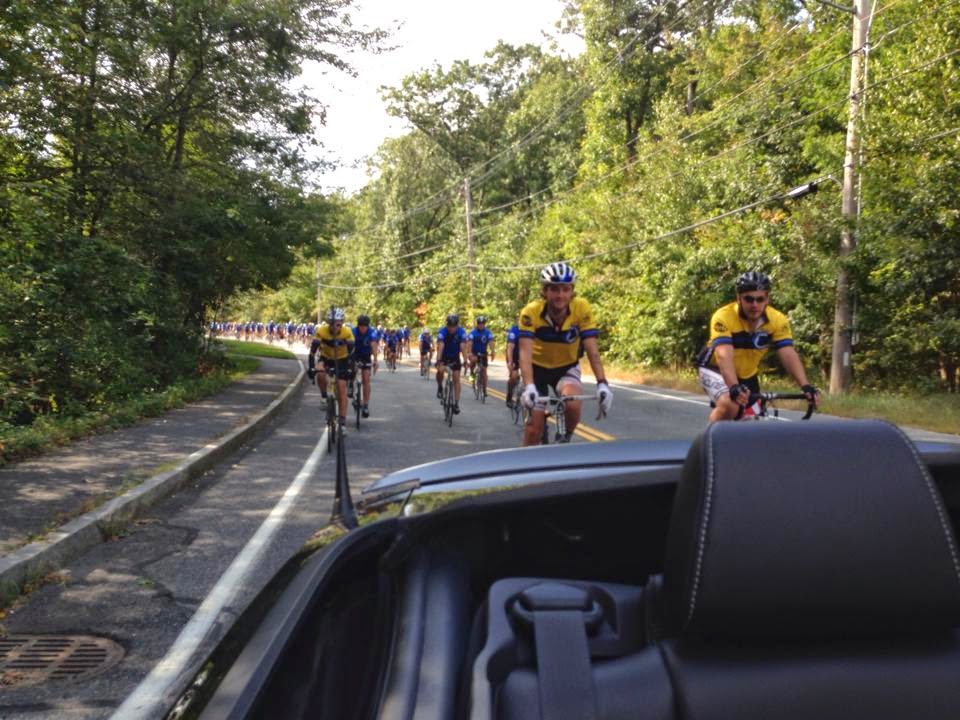 After pumping our
tires up and joining the bulging street of riders, I looked down and saw bad
news—my front tire was flat! I jumped off, ran to the far back of the crowd
where the vehicles were, Doug following, searching for the repair vehicle. Meanwhile
the clock was ticking as the riders were clipping in, ready to. I finally found
Steve, the repair guy, and in 30 seconds he had me ready to go. Clip-clopping
on my cleats, juggling my bike, sprinting back to the riders… but they were gone.
I hopped on my
bike and Doug and I pumped hard to catch them. It was exciting, because we
had to slice right between a parallel line of police motorcycle escorts until
we became the last of the riders in the group. It was cold; by mile 10 our
hands were stiff, noses running. I found that I couldn’t shift to the big gear because
my left hand simply wouldn’t obey—too cold! 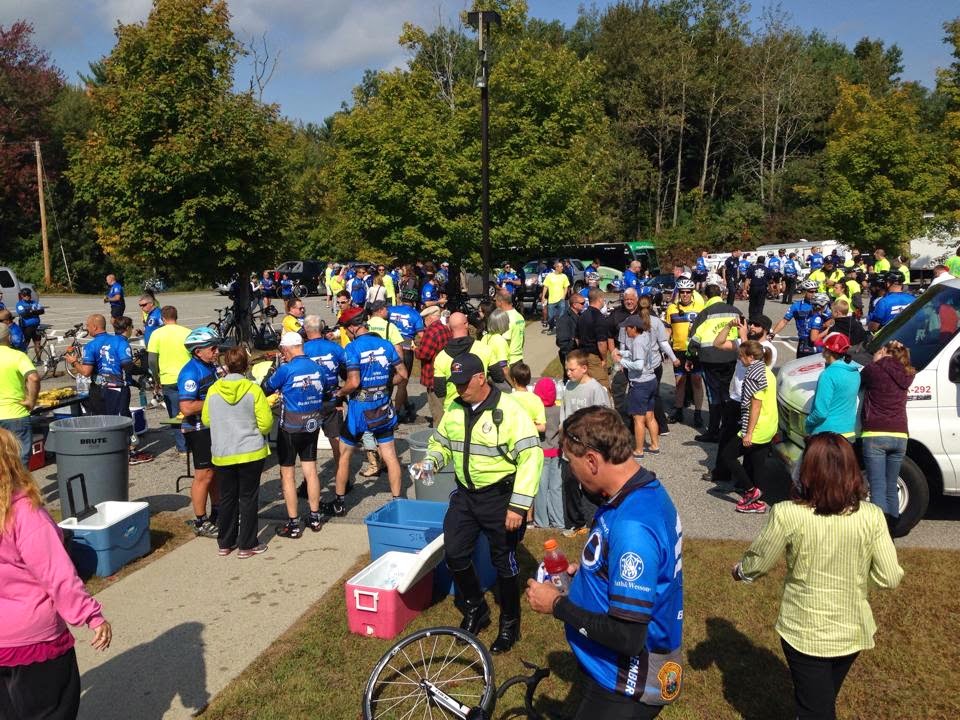 The first leg, to
mile 18, was the hardest for me, incredibly. I had spent the last few days in
Washington DC at the NHF event, and while I hit the gym once, I didn’t feel
warmed up; the cold air wasn’t helping. After the first break in Palmer, MA,
where the support staff served boxes of bananas, bagels, Clif bars and Gatorade, we
fueled up (you must keep eating throughout the ride), stretched out and within
15 minutes were back on the road. We immediately hit a hill; there would be
many tortuous hills on this long ride, which tested not only your aerobic
capacity, but your quad strength, and your mental fortitude. Honestly, I kept
hearing in my head, “I think I can, I think I can…” Tim and Lee were somewhere
ahead of us; Doug stayed in the large gear (the hardest) the entire 106.7 miles, and powered up every
hill. That. Is. Crazy.
Life is like a ten speed bicycle. Most of us have gears we never use.  ~ Charles M. Schulz
There would be
five rest stops. But you must also drink a ton of fluids and these catch up
with you eventually. At one forced stop in the middle of a narrow country road somewhere
in mid-Massachusetts, to wait for the huge group of riders to catch up with
each other, I decided, like a lot of riders, to use it to my advantage. We
hopped off our bikes and headed for the woods. The men went one direction to
the edge. I delved a bit deeper into a more remote spot, where I thought there
were an awful lot of thick vines. Vines? I tried to pull them away and step over
or through them—ouch! Rusty barbed wire. One sliced my knee a little; I
thankfully didn’t get a piercing where none was desired and I headed back. A little drama is good for the story and the medical
crew was delighted to have something to do.
When the spirits are low, when the day
appears dark, when work becomes monotonous, when hope hardly seems worth
having, just mount a bicycle and go out for a spin down the road, without
thought on anything but the ride you are taking. ~ Sir Arthur Conan Doyle Author of Sherlock Holmes 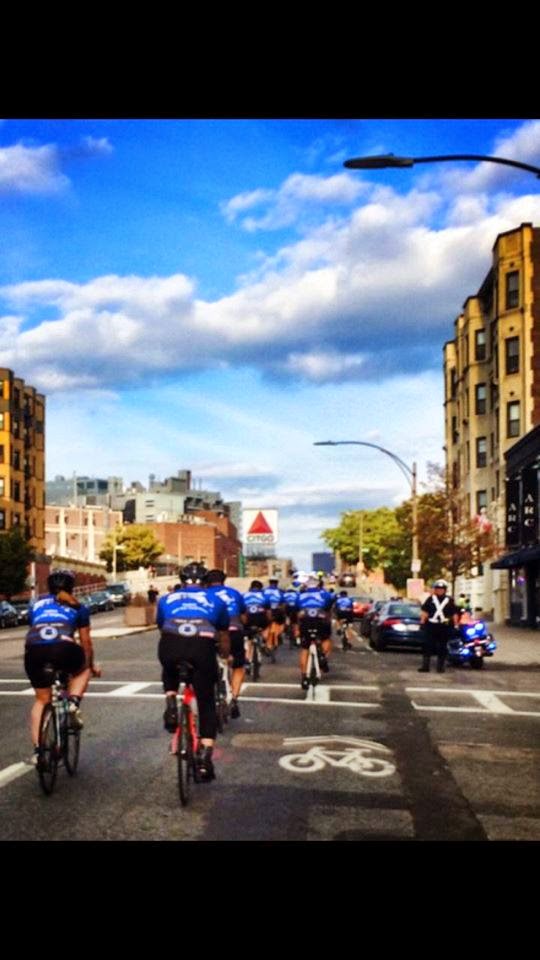 Back on the road
and the rest of the ride was wonderful. I hit a little “wall” at mile 40, just
feeling like I could easily nap, but oddly, by mile 60 I was revved up and
flying. We took hills doing 15 mph at times, and flew at 32 mph downhill. We
had a police escort the entire way, so were well protected from cars. All
traffic was stopped as our entourage sped through intersections, town centers,
crossed highways, thumped over railroad tracks. I took only one spill when, to
avoid crashing into another cyclist, I couldn’t complete a sharp left turn to
cross railroad tracks at a 90 degree angle. My tire went right into the track
groove and I gracefully slid to the ground. No harm done. Doug and Tim had a
crash—together! Other riders had several crashes and there were many chains
that fell off. 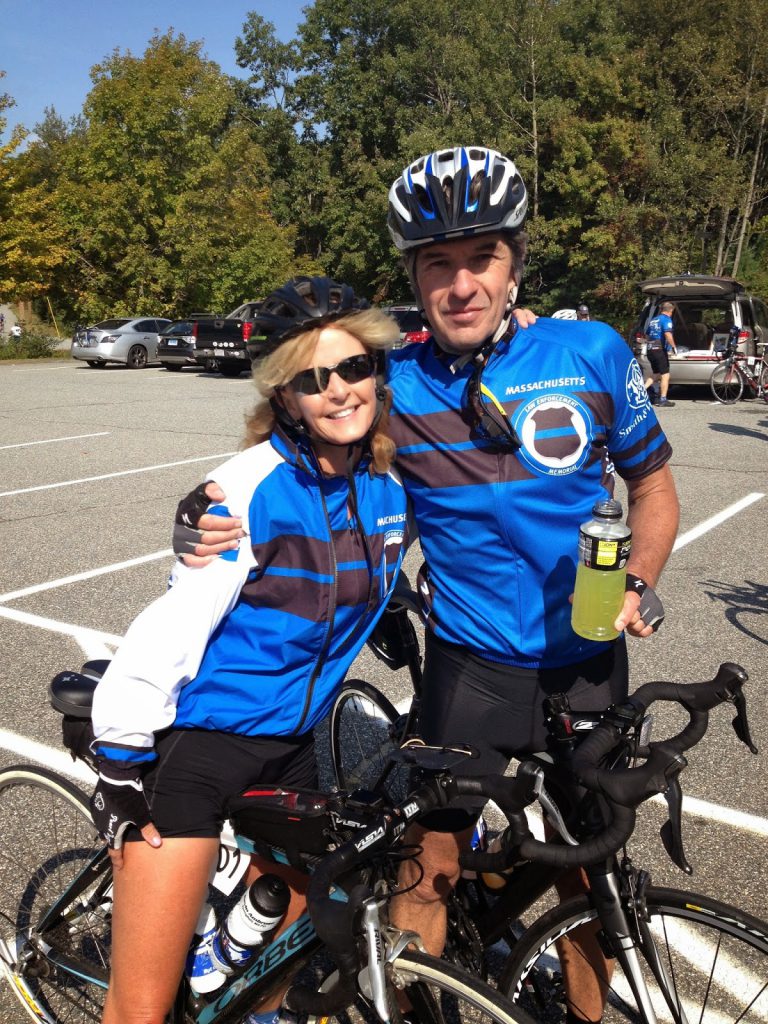 By 5:30 pm, we
rode into Boston, past the famous Citgo sign, with crowds along the way
cheering us on. We swarmed together like bees as we pulled into the State House
and congratulated each other. I was so proud of Lee, who had only taken up cycling
this past spring. This goes to show what training and determination can do
(though she seems to have some natural talent). And Doug was outstanding, and
now hooked on cycling. We’re going to sign up for some classes this winter with
a pro to learn how to improve our performance.
And I’m proud of
my brother Tim, his K9 partner Cairo, and his brotherhood of police officers
and firefighters (my older brother Tom Morrow is also a firefighter!): what wonderful public servants and what better way to tell
them, to show them, how proud we all are: spending out day on a physically grueling
ride, with such positive feelings, surrounded by some of the most honorable
people you’d ever want to know.
It’s a lot like our hemophilia community, with so many of our
brothers lost to us forever due to someone else’s negligence, there are so many
fallen, but never forgotten. I think of Barry Haarde and his remarkable Ride Across America, doing an average of 120 miles a day—a day! Think of it! For 30
straight days. It seems humanly impossible, until you realize that when you
have a passion, a cause, an injustice to fix, and some training and a goal,
almost nothing is impossible.
Ever bike? Now that’s something that makes
life worth living!…Oh, to just grip your handlebars and lay down to it, and
go ripping and tearing through streets and road, over railroad tracks and
bridges, threading crowds, avoiding collisions, at twenty miles or more an
hour, and wondering all the time when you’re going to smash up. Well, now,
that’s something! And then go home again after three hours of it…and then to
think that tomorrow I can do it all over again! ~ Jack London, Author