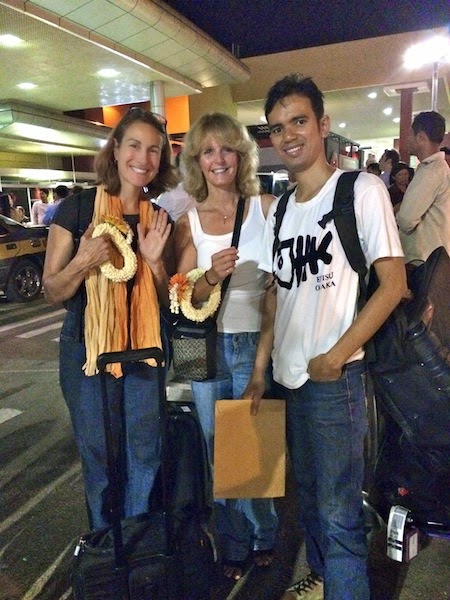 When Save One Life executive director Martha Hopewell and I arrived at
midnight after traveling three flights in 30 hours, we sailed through customs in Phnom Penh, capital of Cambodia, even though I am carrying factor to donate; it’s always a good day when all our bags show up. Sithan, a 33 year old with hemophilia A, and president of the Cambodian Hemophilia Association (CHA)  and his wife were waiting to greet us, with jasmine wreaths.
Next day, Wednesday,
at 4 pm, Sithan and his wife arrived at our boutique hotel, which sits on the Mekong River. We sat in the lovely
restaurant while Martha reviewed all the Save One Life material with him. I
took some photos, and then we all had dinner. The food here is
great! We plan our week which will include visits to the hospitals, families, and The Killing Fields. 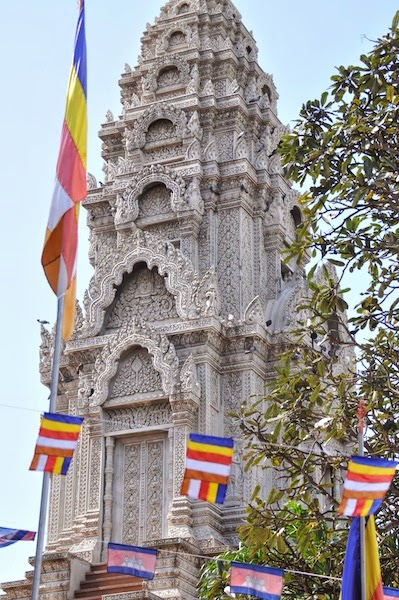 Cambodia is a country that has suffered. Primarily Buddhist, and peaceful, it has nonetheless endured some of the worst horrors mankind has to offer. Bombed incessantly from 1970-73 by the US, in an attempt to destroy the Ho Chi Minh trail which supplied Communist North Vietnam, then torn apart by its own leaders as the evil Pol Pot regime took over from 1975-1979. About 3 million people died from starvation, executions and torture as Pol Pot attempted to create a self-sufficient, Communist utopia. Instead, it was hell on earth. That era wiped out a generation, and in speaking with families this week, we would witness how family histories just disappeared.
And it still suffers, from untreated hemophilia. Our goal will be to assess Cambodia for Save One Life, and then enroll our very first children, offering hope to some families in poverty here.

Cousin Panuuk stole the
show. What bright eyes, inquisitive personality, and mischievous smile! He
captivated everyone. A natural in front of the camera, I confess I took many
pictures of him, to catch all his varied expressions. All the children were
exceptionally beautiful.
The mother was so grateful to us for our visit. I observed her very nice clothes, probably her best, wanting to make the best possible impression. As we said our good byes she hugged me.
After this family
we had lunch, and then went to see another at 2 pm, not too far away. This
visit was quite different. The family of eight, two parents and six kids, live
in a three-room house right in the city, on an extremely busy street. One room is a small storefront—basically
a counter in front of a small room with various supplies stacked up. Out front,
a small refrigerated stand that serves ice cream and cold drinks.  Only the mother and son were present. The
boy, name unknown yet to me, was sitting on the small cot, one leg tucked under him,
his knee swollen; he was pale, remarkably thin, without musculature, and
sullen. The mother, age 49, was hyper and stressed. She sat on the floor next
to her son, and talked incessantly, while her son stared down at and played
with his overgrown fingernails. I’ve been in dozens of homes of the poor, but
this one really made me look hard. They are not as poor as most: there are two
cameras on tripods, so they own a side-business of taking photos. She has a
good inventory in the store of food, toiletries, batteries. But her house— what
a disheveled mess. Things stacked helter-skelter, dishes dirty. No place to
wash, or even cook. I don’t think she does cook. Many homes are dirty due to the
nature of where people live and lack of access to water, but most are organized.
The lack of space means people get creative with being organized. This was just
a random mess. It bothered Martha and me. And the boy, age 15, but looking like an eight year old, is
malnourished and weak. He isn’t attending school yet this year because he can’t walk on one
leg. He doesn’t want to be taunted. Later he added that there are five floors
to his school. PT is $10 a session. I told Sithan this is where he can make a
big difference as a “big brother” and mentor. This child needs physiotherapy,
and more than that, an attitude change. When we asked him questions, he looked
annoyed, lifted his head, and then dropped it.
Usually families
put on the their best foot forward when they know they have foreign visitors
arriving, who are offering them help. Still, we decided
we will enroll him, as it will be a chance for CHA to monitor him,
and for him to offer something to his family, besides being a burden. We
compared notes on the ride back, and Sithan said, The mother is stressed and
the child is depressed. I know; I have been depressed. But even in families
were the child has suffered immeasurable, I have always seen some glimmer of
hope. Here, there needs to be a glimmer. Perhaps a sponsorship will show them that there is hope, and that they are cared for.
To sponsor a child with hemophilia in Cambodia, visit www.SaveOneLife.net
Next Sunday: A Visit to the Killing Fields.