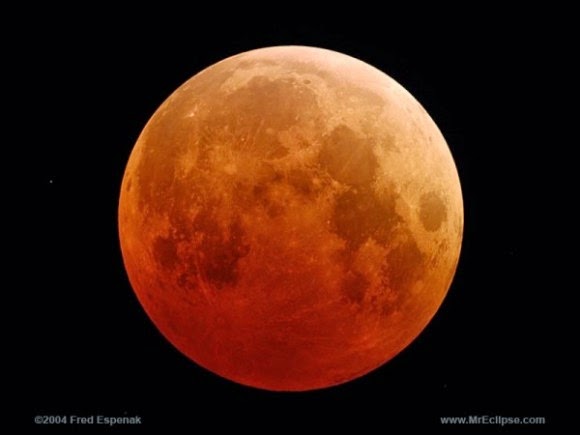 A natural phenomenon
occurred October 7-8: a Blood Moon with an accompanying lunar eclipse. I’m interested in how and why this term, which is
becoming more widespread, developed, and in all things related to blood. The origin
of the term is religious, according to Christian pastor John Hagee.
From the internet I gleaned
this: Hagee used the term “blood moon” to apply to the full moons of the ongoing
tetrad – four successive total lunar eclipses, with no partial lunar eclipses
in between, each of which is separated from the other by six lunar months (six
full moons) – in 2014 and 2015. John Hagee appears to have popularized the term
in his 2013 book Four Blood
Moons: Something is About to Change.
Hagee speaks of a lunar
tetrad as representing a fulfillment of Biblical prophecy. After all, the moon
is supposed to turn blood red before the end times. Why are more and more people are using the term “blood moon” to
describe the four full moons of a lunar tetrad? No one really knows!

But in astronomy, writers
often describe a totally eclipsed moon as appearing “blood red.” A moon may look
red during a total lunar eclipse because of sunlight that is filtered and
refracted by Earth’s atmosphere. From the website
“earthsky.org”:
“During a lunar
eclipse, you’ll see the Earth’s shadow creeping across the moon’s face. The
shadow will appear dark, like a bite taken out of a cookie, until the shadow
completely covers the moon. Then, during the breathtaking time of totality, the
shadow on the moon’s face often suddenly changes. Instead of dark, it appears
red. Why?

“The reason stems from the
air we breathe. During a total lunar eclipse, the Earth lies directly between
the sun and the moon, causing the Earth to cast its shadow on the moon. If
Earth didn’t have an atmosphere, then, when the moon was entirely within
Earth’s shadow, the moon would appear black and invisible.
“Thanks to Earth’s
atmosphere, what actually happens is much more subtle and beautiful. Earth’s
atmosphere extends about 50 miles (80 kilometers) above Earth’s surface. During
a total lunar eclipse, when the moon is submerged in Earth’s shadow, there is
circular ring around Earth – the ring of our atmosphere – through which the
sun’s rays pass.
“Sunlight is composed of a
range of frequencies. As sunlight passes through our atmosphere, the green to
violet portion of the light spectrum is, essentially, filtered out. This same
effect, by the way, is what makes our sky blue during the day. Meanwhile, the
reddish portion of the spectrum is least affected.
“What’s more, when this
reddish light first entered the atmosphere, it was bent (refracted) toward the
Earth’s surface. It’s bent again when it exits on the other side of Earth. This
double bending sends the reddish light onto the moon during a total lunar
eclipse. Depending on the conditions of our atmosphere at the time of the
eclipse (dust, humidity, temperature and so on can all make a difference), the
surviving light will illuminate the moon with a color that ranges from
copper-colored to deep red.”
So, watch for the “blood moon” during a lunar eclipse!
Great Book I
Just Read
Three Dog
Nightmare
Chuck Negron 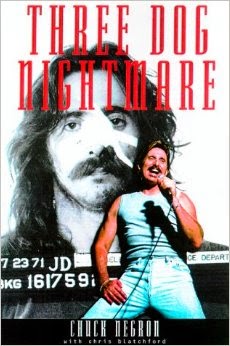 My first LP was “Golden Biscuits” in the 1970s, and so began my life-long love of Three Dog Night, the popular rock band of the 1960s and 70s. Who knew
the debauchery and drug-induced devastation that took place? Negron, lead
singer with a powerful voice, details his rise to stardom and then the slow and sharp decline into
the life of a junkie. He spends his entire fortune on heroin, destroys
relationships and the band, and brings his children into the world addicted to
meth and heroin. That he is still alive and performing is a miracle, after
being so near death for so many years. He engages in crime, sinks to the level
of street junkies, gangs, and would do anything—anything—to get his next fix.
It is a shocking and disturbing portrait of the high price of fame and a
natural inclination to addiction. I finished this in two nights: hard to put
down and technically an easy read. I deeply applaud Negron for sharing his life
and how he turned it around eventually. Hard to understand are his complaints and
character assassinations about his bandmates, particularly Cory Wells, which come
across as juvenile and unappreciative. Negron should never judge anyone after what he inflicted on
others. Still, I will always love Three Dog Night! Negron is still touring solo, and Danny and Cory are touring as TDN. Three/five stars.