Laurie Kelley July 19, 2015
When does a company change its name, especially when it’s got a good thing going on?

We’ve seen change in our bleeding disorder community when one company buys another—called an acquisition. Some of the factor manufacturers have been acquired through the years, sometimes with a name change: can you think of any? Specialty pharmacies have seen a fast and furious amount of consolidation: your speciality pharmacy may have been one of them. It’s been going on for over 10 years now. So fast and often, you may have missed a few!
But when the biggest factor manufacturer changes its name, that’s worthy of a blog. And it’s not from aquisition—it hasn’t been bought. Baxter Healthcare International, as part of its strategic planning, has now become two separate companies. The company has long been a leader in hospital supplies—like dialysis equipment, IV pumps and solutions, and biologics—like factor. Baxter’s BioSciences division is where its factor products are made. 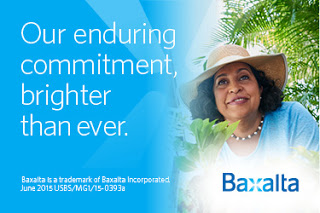 So Baxter has spun off the BioSciences division, which is now a completely separate company. Headquarters will remain in the Chicago area, but its R&D division will move to Cambridge, Massachusetts, about 30 minutes from my house, in fact! Cambridge is the center of the biotech universe.
The new company is called Baxalta, a combination of the familiar name Baxter and “alta” which in Latin means “high” or “above.”
As a consumer, you’ll see eventually new packaging and a new name. But I think most of the people you know at Baxalta, like your local rep, will stay the same for now.
Please check out the new website, and get to know Baxalta!
This post and images are sponsored by Baxalta

Dr. Mutter’s Marvels: A True Tale of Intrigue and Innovation at the Dawn of Modern Medicine [Kindle]

An intriguing, ethical, compassionate physician and brilliant surgeon, who introduced plastic surgery to the US from Paris, Dr. Thomas Dent Mutter seemed destined to make history. Orphaned at an early age, impoverished, he nonetheless rose the ranks in the difficult and often snobbish Philadelphia medical community, becoming beloved by students and patients for his expertise as well as compassionate treatment of patients. At a time when the best surgeon was often the fastest (there was no anesthesia for a long time!), Mutter was highly regarded, especially for treating cases of “monsters,” those people scarred by horrific accidents, or having deformities. He dedicated his life especially to those deformed by disease, birth or accident, and his contributions are now in the macabre but utterly fascinating Mutter Museum in Philadelphia. I’ve been there and was amazed! It’s a legacy for a man who is admirable for his contributions, dedication and ethical manners. I couldn’t put this book down! Five/five stars.