Laurie Kelley April 11, 2016
On April 8, 26 years ago, 18-year-old Ryan White died.
He is remembered in the bleeding disorders community for his extraordinary courage. Born with hemophilia, he was diagnosed with AIDS when he was only 13, in 1984. AIDS was not well understood at this time, and fear was rampant in the public. People thought you could catch HIV by shaking hands with someone with it, or just being near them. Ryan contracted HIV from his clotting factor, which at the time was not treated to destroy viruses. He posed no threat to anyone.
When his school tried to keep him from attending, Ryan and his mother Jeanne White Ginder launched a legal battle, and Ryan became a celebrity. And celebrities stood by him, including Michael Jackson and Elton John. He became the face of discrimination against those with HIV, and became an advocate for AIDS research and public education. He died in April 1990, one month before his high school graduation. 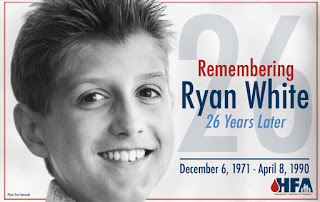 In August 1990, four months after White’s death, Congress enacted The Ryan White Comprehensive AIDS Resources Emergency (CARE) Act (often known simply as the Ryan White Care Act), in his honor. The act is the United States’ largest federally funded program for people living with HIV/AIDS. The Ryan White Care Act funds programs to improve availability of care for low-income, uninsured and under-insured victims of AIDS and their families. The legislation was reenacted in 1996, 2000, 2006, and 2009, and is now called the Ryan White HIV/AIDS Program.
Today, his mother Jeanne continues to advocate to spread Ryan’s message and story.
For an excellent multimedia look at Ryan’s impact on the hemophilia community, visit HFA’s website.