Laurie Kelley February 19, 2018
I was shaken to my core when I learned yesterday, while in Fiji preparing to do a full day hemophilia workshop, that my dear friend Barry Haarde had passed. It was surreal; how could this giant of a man–in stature, in compassion, in physical prowess, in notoriety, be gone? How?
He was so loved by so many. Hundreds of people around the world looked up to him and were inspired by him. I became a cyclist because of Barry, and rode the last 50 miles with him on his first cross-country tour, to benefit Save One Life. This became the first of his many endurance rides. 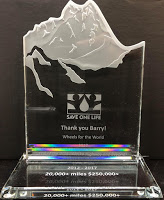 Over five years, through his “Wheels for the World” campaign, Barry racked up over 20,000 miles, criss-crossing the US five times, and generating over $250,000 for the charity I founded, Save One Life. Barry sponsored a child himself and was an avid supporter for the poor in developing countries. Barry was an endurance machine, despite having HIV, and a contracted joint.

But life was the hardest endurance ride of all. Despite all he suffered and overcame, he passed all too young, at age 52. He and I shared many ideas, many hours talking about life, family, love, cycling, our community. We biked, hiked, spoke together, toured, attended galas and even skydived together (his first time!) on his 47th birthday. (True to Barry’s persona, it wasn’t just a skydive but had to be the highest tandem one in the world.) He loved lighthouses and jazz. Adored his mother and family. We were great friends and he was my hero, and one to our community. He has left a hole in the world. A giant has fallen. I pray we can carry the memories, the concern, the passion and compassion, the mission forward.
Barry was a very private person, and the essay below, in his own words, reveals his shy side, his sometimes solitary nature, his suffering. His ability then to galvanize our community the way he did was an act of bravery. Rest in peace, my dear friend, our dear Barry. You’ve left behind a very big footprint, a very deep tire tread. No one can ever replace you.
Someone once wisely observed that success and fulfillment in life was principally achieved by just showing up.  Never much of a people-person, I had generally avoided showing up at very much of anything over the course of my life.  Perhaps that was due in some measure to having been born with severe hemophilia A in 1965.  I had grown up in a rural area with no local hemophilia treatment center, no summer camps, and perhaps most notably, no factor concentrates.  Years of repeated knee hemorrhages had often resulted in days spent inside reading or studying music.  Limping my way through childhood often resulted in the inevitable teasing from other kids.  “If I cut you, will you bleed?” was a common refrain.  I learned to avoid situations where I would have to talk about my bleeding disorder and began to prefer my own company or the company of my family.
In 1985, AIDS entered our lives.  I was tested with my brother and brother-in-law as were thousands of other hemophiliacs.  After being advised that the risk of AIDS was “minimal,” we had continued using factor concentrates and each of us tested positive for what was then referred to as HTLV III, later renamed HIV.  Pat, my brother-in law, was gone by 1990.  AIDS was never mentioned at his funeral.  My brother, John, survived a paralyzing stroke in the same year as his HIV diagnosis. When hearing the news from the man in the white lab coat that “you’ll probably die within three years,” what does one do at the age of 19?  At a time when most are planning their careers and looking forward to marriage and a family, I found myself asking some very difficult questions.  What would I do with whatever time I had remaining?  Who would care about someone like me with a dreaded and lethal disease?  Did I even want to live in a world that sometimes treated AIDS victims by terminating them from their jobs, firebombing their homes and denying them medical care in hospitals?
There were many questions and no answers.
Like many others, I simply made the best of things and prayed that a cure would be found.  I pursued a career in music as a trombonist, which eventually led to some national tours with Broadway shows and the Tommy Dorsey Orchestra.  I had the opportunity to perform with Bob Hope, Perry Como, Rosemary Clooney and many others.  I eventually left the music business, as health insurance is a little hard to come by when playing the trombone for a living.
At the age of 30, still surviving HIV and hepatitis C, I decided to settle down and get a day-job. Although society’s attitudes toward AIDS and those living with HIV began to slowly change over the years, I still found it very difficult to confide my medical history to anyone.  In a 25-year period of time I told no more than a dozen people about my HIV status. However, things changed dramatically for me in 2007.  My brother passed away.  He lived a courageous life until liver failure from hepatitis C took him from us in 2007.  Other than a friend in California, my brother was the only other person with hemophilia in my life. During the time that my brother was still in the hospital, I began Interferon treatment for hepatitis C.  I did not respond to my initial treatment attempt and for the second time in my life, doctors told me that without a liver transplant, I would not live much longer.
My experiences in 2007 resulted in many changes in my life.  I began to show up.  I resolved that whatever the outcome, I would not depart this world quietly…
Barry Haarde Haarde, B. (2010). Dedicated to Making a Difference. Matrix Health News, 5(4), 13-14. Retrieved from http://www.matrixhealthgroup.com/NFall2010.pdf