HFA: Together We Rock!

The Hemophilia Federation of America sure knows how to throw a party! And a three-day meeting, all aimed at educating the community about bleeding disorders while providing a busy but intimate venue for meeting up with old friends, acquaintances and business colleagues. And held in Cleveland, with a final evening a celebration at the Rock and Roll Hall of Fame, the theme “Together, We Rock” was absolutely true and we did! 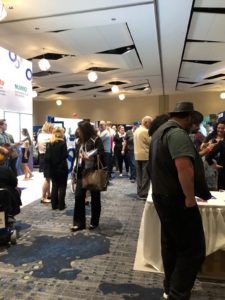 I was able to attend some sessions while there, in between visiting our Save One Life booth and greeting sponsors, donors and interested people, and chilling with some very great friends (Debbi Adamkin, Neil Herson, Ray Dattoli, Melissa Compton, to name only a few). First was an invitation-only meeting with Genentech about mlibra, and specifically the recently reported deaths. About 20 consumers, all key opinion leaders associated with hemophilia organizations) attended. I won’t go into that here in much detail, as the meeting completely corroborated with the article Paul Clement wrote in the May issue of PEN, available on our website.

In a nutshell, though, Genentech shared how Hemlibra has been granted Breakthrough Designation Status by the US FDA to fast-track approval of Hemlibra for noninhibitor patients, based on the HAVEN 3 study data. Conversation turned to the five deaths, out of the 600 current users of Hemlibra globally. Genentech walked us through each death, one by one, what was known and what was reported. We now know that two were Americans, one of whom was in a clinical study. While the explanations all made sense, Ray Datolli, a COTT representative, remarked, “It’s always a clinical study, and it’s always 1981.” The other attendees also commented that the delay in learning of the five deaths was a problem; the community wants to know sooner about these “adverse events.” Genentech then reviewed why they cannot comment on the deaths, for reasons we spell out clearly in our article, and in some cases, the families of the deceased themselves did not want the information released.

Debbi Adamkin, executive director of the Florida Hemophilia Association commented too that the community needs to be educated that Hemlibra is not a cure, and many think it is!

To learn more about Hemlibra, please read our article in the May issue of PEN.

Another good session was on inhibitors, by Vanessa Byams of the CDC. We learned that the CDC hosted a second national inhibitor summit in January 2017 and is closely following inhibitor trends in our community. Its goal is to share information from the community, and to discuss how to collect high quality data, to make sure inhibitor tests are accurate. NHF’s MASAC has an Inhibitor Prevention and Eradication Working Group, which has led to a national collaborative effort to increase enrollment of babies with hemophilia and inhibitors in the CDC Surveillance study. The bottom line is, all hemophilia patients are at risk of inhibitors (with certain exceptions) and there is a lot of research happening on inhibitors. Vanessa said that in the last 18 months alone there is “an incredible movement and action” regarding inhibitor research. “The road to inhibitor prevention starts with national surveillance, including regular screening and early detection If you detect it early, the better the chance of eradicating it.”

One clear hole in our weekend was Barry Haarde: we were all missing his presence, as HFA was truly a home away from home for him. His sister Emily came to fill in for him, and we all shared Barry stories, while admiring his contributions to HFA and Save One Life, which helped so many around the world. With sadness and sweetness, we all felt his absence all too well.

On Saturday morning, Novo Nordisk sponsored a “B Yourself” symposium for families with hemophilia B. It was very lively, as the audience could participate in answers using the buttons at their desks; answers were tallied and displayed instantly on the screens, from tables designated with rock and roll names: The Rolling Stones, the Beatles, Prince, etc. It made it all the more fun. The topic was mostly about pharmacokinetic (PK) testing, with different patients sharing about their different half-lives, and different dosing schedules. It got pretty technical but was fascinating. It really is imperative that every person with hemophilia know their PK levels, because we now know that you cannot dose just by weight and correction percentage—you do need to know your half-life. We will have some great articles about that in the November issue of PEN.

I spoke with dozens of people, all involved in the community, from patients, to advocates, to chapter leaders to industry reps. Two main themes really became clear, one scary and the other exciting.

Scary? Funding in the community is being restricted. Every executive director of a chapter I spoke to commented on this. Our pharmaceutical sponsors are pulling back funding, perhaps as the marketplace is glutted with products, and we expect some consolidations and acquisitions (like Sanofi buying Bioverativ, and Takeda making moves on Shire?). No one is sure what will happen, but some programs may need to be cut. 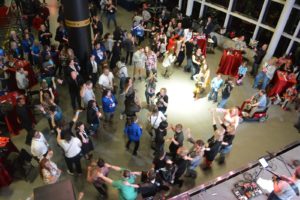 Exciting? Gene therapy. More than one person said to me, “It’s not a matter of if anymore, but when.” Gene therapy is coming. How will it impact our lives, both as patients and as community employees?

We don’t know yet, but as we rocked the night away Saturday night to a great band at the Rock and Roll Hall of Fame, we celebrated the great advocacy and grassroots work of HFA and its team, celebrated being a family of people with bleeding disorders, and excited about what the future holds.