The World Federation of Hemophilia convened its biannual Congress this week in Glasgow, Scotland, for approximately 4,000 attendees from 120 countries. It is an amazing mix of cultures, languages, disciplines—all for those with bleeding disorders.

This was my 12th Congress, and I am always amazed to meet up with people I’ve known for over 20 years now. We are all still fighting the good fight, in trying to bring advanced care and relief to those who suffer with bleeding disorders in other countries.I have so many notes from so many sessions, that I’ll need to read them out over a few blogs. Always fascinating is the opening night, which sets the tone for the Congress. The address is by the current president, in this case, Mr. Alain Weill, father of a son with hemophilia. The audience was packed with people and a hush fell over us as Alain took the stage.

So Alain put forward two Calls to Action. The first was a call to develop a diagnostic test for hemophilia. Something like a test used to check glucose for those with diabetes. Imagine just pricking your finger and learning whether you have hemophilia! This may not seem a priority for those of us in developed countries but for those in developing countries, it would be a revolution.

The second call to action pertains to commercial clotting factor (CCF). Basically, most poor countries lack access to factor. The WFH measures how much factor a country uses by how many international units (IU) are consumed per capita (per person). Alain mentioned that 55 countries use less than 1 IU per capita, far below the recommended amounts. With 12 billion IU sold in 2016, and assuming that the world population of hemophilia used 1 IU per person, Alain noted that industry would need to increase production of factor by 21 billion to reach all people with hemophilia. Is this realistic? he questioned. Can pharma do this?

This led to his second Call to Action, a series of changes to factor and its production:

And finally he offered a stinging comment about pharma companies that sue one another (this would be pointed directly at Shire): end the legal actions against one another, especially if they block innovative therapies. 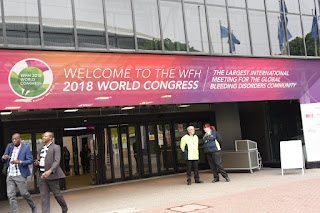 Alain urged a task force at once to review these and implement them. I’d like to be on that task force. These are action items I have been working for the past 20 years. Free factor to the poor, more factor and accessible factor for all… not just the lucky ones, like us.