Milena started her talk by reading a post by one mother, about how devastated she felt at the diagnosis of hemophilia, and how much Hemophilia Mother had helped her–more on that letter in a bit.

More interesting than all the stats is Milena herself. Obviously not from Canada, with a foreign accent. She is a doctor, from Sarajevo, capital of Bosnia and Herzegovina. She survived the siege in 1992, which she recounts online:
“Some 10,000 civilians, including 1,500 children, were killed in Sarajevo during the 44-month-long siege, mostly by snipers and mortars fired from mountains surrounding the city. UNICEF reported that of the estimated 65,000 to 80,000 children in the city, at least 40 per cent had been directly shot at by snipers; 51 per cent had seen someone killed; 39 per cent had seen one or more family members killed; 19 per cent had witnessed a massacre; 48 per cent had their home occupied by someone else; 73 per cent had their home attacked or shelled; and 89 per cent had lived in underground shelters. We lived in a besieged city for 31 months with a toddler, without food, electricity and under constant shelling! And we were somehow spared? Survivor guilt mixed with hemophilia mom guilt stayed tangled in my brain for many years to haunt me more than I would ever want to admit.”

Milena emigrated to Canada and settled in Manitoba. Her son was diagnosed with hemophilia at age 6. She was very much alone, with trauma embedded in her memories. It was a difficult time.

“All our struggles to survive the Bosnian war during the siege in Sarajevo, immigration and my recent diagnosis of a chronic condition were nothing compared to the feeling of loss after hearing our son’s diagnosis. Was it because we were both doctors unaware that he had an underlying condition, or the fact that I didn’t know I was a carrier, or that we were alone in that suburban apartment far away from our family and friends that day? I don’t know and I will never know but it hit us harder and deeper than my understanding goes. I went to my son’s room, I hugged him, I squished him tighter and longer than he wanted. He looked at me with his innocent smiling eyes. He had just turned six.” 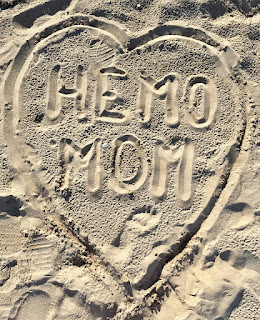 Hemophilia Mother was born. And here she was today, sharing her story and her Group with a rapt audience. She closed her talk by finishing the letter from the mom; the mom at one point was seriously considering to take her own life, so severe was her depression. But the support she received from others in the group made her want to live again; the community members gave her hope.

Coming home, reading my notes from that day, I had jotted down what the CEO of Sobi, Guido Gelkers, said when speaking about the 1 billion IU factor donation made by Biovertiv/Sobi to the WFH, referring to those who live in developing countries: “When you sit in your office, you forget what others’ lives are like.”

Hemophilia Mother knows what the lives are like of anyone in any country struggling with hemophilia. Members live it every day. Join it: give advice, get advice.     And be supported and inspired. Thank you, Milena, for your service and your inspiration!