The US hemophilia community is renowned for being politically active: we’re educated, smart, proactive and dedicated to protecting our need for access to affordable and safe factor concentrate, and medical help from HTCs. No doubt our political savvy was forged in the hellfire of the hemophilia holocaust of the 1980s and 90s, where we fought from the outside, securing justice from government to ensure this never happens again.

But it’s rare that the hemophilia community makes change from inside the government, as members of government.

Currently we have two people that I know and know of, running for offices.

One is long-time colleague Randi Clites, mother of a child with hemophilia, who is running to be a representative in the Ohio House of Representatives. Randi is currently associate director at the Northern Ohio Hemophilia Foundation, and someone I’ve met at many hemophilia meetings. She is passionate about health care, dedicated, and a true advocate. On June 15 she posted: “It’s official. I am grateful to have earned the Democratic nomination to run in November to become the next State Representative for the 75th House District.” She has a beautiful website that covers her campaign and asks for donations.

I love this post of hers on Facebook from two days ago: “Yesterday I was out door knocking and I stopped at Kent Dairy Queen for a break while it rained. A young man there asked why he should vote for Randi, because I was wearing my campaign shirt. I introduced myself and he had some of the best questions I’ve been asked while canvassing. I am so inspired by our young people. They are paying attention and engaging. My parents didn’t talk to me about politics. I think we need to. Please take a few moments today and talk with your youth and young adult children about their thoughts on politics.”

Canvassing is hard work, as is campaigning. I’ve been trying to help the second person in hemophilia I know, Bob Massie, in his bid to become Massachusetts’ next governor. You may know Bob; he is quite a legend in our circles, though he no longer has hemophilia. Bob was profiled in the movie “Bad Blood.” Bob was also the subject of the 1973 book Journey, written by his parents, Pulitzer Prize winner Robert K. Massie and then wife Suzanne. The book is a gripping true story of Bobby’s life, which chronicled his immense suffering as a child, and showed the origins of his political activism. His parents were politically oriented, especially his mother, who, with her knowledge of Russia, became President Ronald Reagan’s advisor on Russia! His parents also helped pioneer home treatment of hemophilia. His parents are good friends of Al Gore (and the Clintons), and Bob himself has adopted climate issues as a personal and political cause, as well as health care and racial justice. Bob has had long and rewarding careers in many fields, as an executive leader, Episcopal priest, and author. He knows what it is like to suffer, and to worry about paying for health care costs. He has a vision for how our state, and world, can be better.

Massachusetts (or “Massiechusetts” as Bob’s campaign cheekily calls it) is one of our nation’s smallest states, but a leader among states. It is home to the birthplace of our country. It is home to some of the world’s best universities and colleges. It is a medical Mecca for research and hospitals; center of the biotech universe; and has a rich history and culture. It is a multicultural state as we attract so many immigrants, especially from the Caribbean. 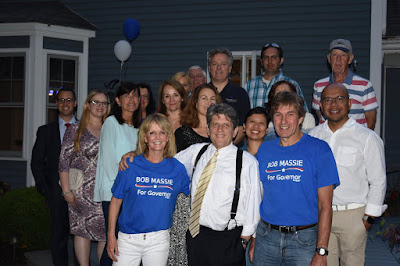 But like all of America, we face tough times ahead and need strong leadership.

It’s heartening to know that people like Bob and Randi are sacrificing so much personally to try to represent us in government. On Thursday night I held a fundraising get-together at my home, where members of our community and my neighborhood were able to meet Bob personally, and hear his platform on health care, transportation, and economic reform. Bob had just been in Springfield the night before, a two-hour commute, and had actually just met my mom! 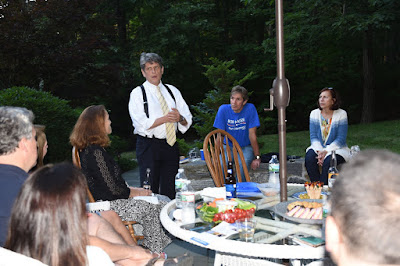 I’ve known Bob for 30 years, which is a story for another time. (Meet Bob here) But that night, someone asked him where did he get the energy, at age 60, with all that he has been through, to keep up this pace, to sacrifice so much, to meet and greet the thousands of people has this past year. “I think it’s because I missed so much as a child, and was in bed so much, that I just love people and getting out to meet them!” he replied. I’ve heard other guys his age say much the same thing.

We are all so grateful to people like Randi and Bob, for their dedication and sacrifices, to hopefully bring some compassion and leadership back into government, and to especially keep in mind those with chronic disorders like hemophilia, who need insiders in government, more than ever. Good luck to both!