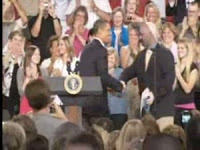 You know all the intense town meetings with President Obama that have focused on health care reform? One was held in Denver yesterday, and our own Nathan Wilkes introduced President Obama to the attendees and to hemophilia. The New York Times writes:

“At a town-hall-style meeting in a high school gymnasium here on Saturday, Mr. Obama was introduced by Nathan Wilkes, whose family nearly lost their health coverage after costs to care for his 6-year-old son, Thomas, who has severe hemophilia, approached the $1 million lifetime policy cap….In introducing the president, Mr. Wilkes fought back tears as he described the birth of his son in 2003, and the first question the doctor asked: “Do you have good insurance?” Mr. Wilkes told of how he ‘searched frantically’ for a new policy when his son neared the $1 million cap, and how a social worker suggested that he and his wife divorce, so their son might qualify for Medicaid. Eventually they found coverage, with a $6 million cap.” 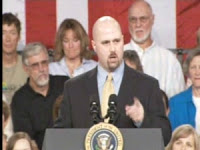 Nathan and Sonji Wilkes are colleagues and friends: Sonji is a columnist for our newsletter PEN. They are both very active advocates for health insurance reform, and Nathan ran for a political office last year. Their son Thomas has an inhibitor, and Sonji is one of our peer reviewers for our new inhibitor book coming out last this year.

This was the town meeting in which Obama sited his grandmother’s death, and in which the university student Zach Lahn asked how private companies could possibly compete with the government on health care insurance. The NYT writes that Obama replied, “‘The notion that somehow just by having a public option you have the entire private marketplace destroyed, is just not borne out by the facts,’ Mr. Obama said, adding that ‘UPS and FedEx are doing a lot better than the Post Office.'”

Congratulations to Nathan for his select role in introducing the president, and thank you for representing the entire community at such a crucial time.

This New York Times best seller and Pulitzer Prize winner traces the story of Oscar, a fantasy, Dungeons and Dragons and sci-fi fan who wants to be a famous author. But we meet his entire Domincian family, three generations of the DeLeons–Oscar’s mother Beli, his sister Lola, his grandmother La Inca, and his friend Yunior– and in exploring their troubled, complex relationship, we also explore the culture and history of the Dominican Republic. Diaz writes explosively, with a hip edginess, directed right at the reader. He weaves into the story the violent history of the DR, its language, its beliefs, its people, its culture, the “Fukú” –the curse– and why Dominican men behave as they do toward their women. And Oscar is so un-Dominican: overweight, can’t dance, no social skills. He longs for a girlfriend, and comes squarely up against a culture of machoism. As someone who has been involved with the DR for 12 years now, I learned a lot more about the island and its people than I already thought I knew. It’s hard to characterize a culture but Diaz has adeptly done it in an entertainingly dark way. Four stars.