This is big news for von Willebrand Disease patients: there’s a new product on the market. Wilate® just got approved by the US FDA for “treatment of spontaneous and trauma-induced bleeding episodes in patients with all types of von Willebrand disease (VWD),” according to a press release. Wilate is a high-purity plasma-derived product, which uses a double viral inactivation process in manufacturing: solvent/detergent (S/D) process and a special terminal dry-heating (TDH) system. No albumin is added as a stabilizer. Wilate is exclusively derived from large pools of human plasma collected in U.S. FDA approved plasma donation centers. Wilate will be available in the market in early 2010.

Wilate is produced by Octapharma, a Swiss-based company. This is the first time Octapharma has entered the US bleeding disorders market. Wilate will be in direct competion with Humate-P, manufactured by CLS Behring.

One thing interesting I learned is that this is the first product developed and manufactured specifically for VWD.

Here’s a quote from Octapharma: “Octapharma’s worldwide commitment to coagulation disorders dates back to Octapharma Group’s formation 25 years ago,” said Octapharma USA President Flemming Nielsen.”We are thrilled that U.S. patients will now have access to Wilate following its significant success in Europe as a next generation therapy. Octapharma is committed to providing the U.S. market with life-enhancing therapies.”

Great Book I Just Read
Final Voyage: A Story of Arctic Disaster and One Fateful Whaling Season by Peter Nichols 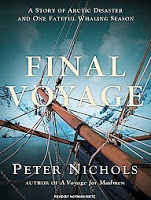 Massachusetts (my home state) gave birth to the American Revolution and also the global whaling industry. This fascinating book recounts a terrible story of scores of whaling ships trapped in the Arctic region, as the captains tried to score as many whales as possible before the ice closed in for the winter. Nichols deftly parallels that story with the beginning of the whaling industry, which has direct ties to Puritans coming to the new world, religious intolerance in Massachusetts in the 1700s, and the Quakers, who almost single-handedly created this lucrative industry. Whale oil soon was lighting the homes of Massachusetts and then lubricating the machines of the Industrial Age, making some Quakers millionaires, even then. Nichols also details the decline of the industry: the discovery of crude oil in Titusville, Pennsylvania, which soon replaced whale oil; the decimation of so many whales left hunting lean. All these events culminate into a dreadful outcome for the ambitious captains of the whaling ships that last season of hunting, as they searched for the last whales in an early and fearsome storm. This book will enlighten you about many subjects, from religion and commerce, to whales and history. Three stars.