A Guide to Living with von Willebrand Disease

Got VWD? Get This! 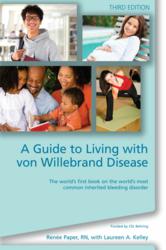 I am very happy to tell everyone that our ground-breaking book, A Guide to Living with von Willebrand Disease, the world’s first book on VWD, is back! We just released the third edition, and it is now available free of charge to those with VWD.

VWD is the most commonly inherited bleeding disorder. I wrote this book together with Reneé Paper, a woman with VWD, emergency room nurse, and powerful advocate. Together we decided on the topics, which include learning to cope with VWD, inheritance, the medical system, treatment, women’s issues, and health insurance. The third edition includes important medical and scientific updates about VWD. This 175-page book offers parents, patients, and healthcare professionals a complete resource guide featuring real-life stories.

As most of you know, Renée Paper dedicated her life to educating people about VWD. We were saddened to lose this incredible advocate in 2007, but I think she would be proud to know her book is in its third edition.
Funding for the development of the book was made possible through a grant provided by CSL Behring, a world leader in developing and manufacturing safe and effective solutions to treat and manage bleeding disorders.
So chapter leaders, program coordinators, HTC staff and home care reps, order online from LA Kelley Communications at https://www.kelleycom.com/books.html or call us at 978-352-7657.
This book is a fantastic resource for any one facing the challenges of VWD. Make Renée proud—read it!
About LA Kelley Communications, Inc.
Since 1990, LA Kelley Communications has been a world leader of groundbreaking educational materials and programs on hemophilia and related bleeding disorders. With more than a dozen books, numerous publications, and the oldest hemophilia newsletter in America, LA Kelley Communications remains a trusted source of practical information about raising children with bleeding disorders. Laureen Kelley founded the company in response to the need for practical consumer and parenting information on bleeding disorders. For more information about LA Kelley Communications, Inc., please visit https://www.kelleycom.com or call 978-352-7657.
About CSL Behring
CSL Behring is a leader in the plasma protein therapeutics industry. Committed to saving lives and improving the quality of life for people with rare and serious diseases, the company manufactures and markets a range of plasma-derived and recombinant therapies worldwide. CSL Behring therapies are indicated for the treatment of coagulation disorders including hemophilia and von Willebrand disease, primary immune deficiencies, hereditary angioedema and inherited respiratory disease. The company’s products are also used in cardiac surgery, organ transplantation, and burn treatment, and to prevent hemolytic diseases in newborns. CSL Behring operates one of the world’s largest plasma collection networks, CSL Plasma. CSL Behring is a subsidiary of CSL Limited, a biopharmaceutical company headquartered in Melbourne, Australia. For more information, visit http://www.cslbehring.com.