Music, as far as I have seen in the world so far, is the only real magic that I know. There is something really honest and clean and pure and it touches you in your heart. Tom Petty

Tom Petty, incredible musician and performer, sadly passed away on October 2, and joined other rock stars in the sky this year: Greg Allman ( Allman Brothers), Sib Hashian ( Boston), Chris Cornell (Soundgarden, Audioslave), and more. Last year we lost heavy hitters like Prince, and David Bowie. Musicians provide the lyrical and emotive background of our lives. When we hear a certain song, our minds can recall towns, people, news events, lost loves, and hopes that happened at the same time we first heard that song.

I love music, from Bach to Metallica, and feel it unites people in ways that are almost spiritual. You can meet someone completely different from you, in age, race, ethnicity, religion, gender… but when you learn they love the same band you adore ( the Doors!), you suddenly find you have everything in common with them!
So, I have to shout out two amazing artists in our bleeding disorders community: Billy Conde and Mathew Tache, who are more than wonderful musicians. They’ve put together a way for music to unite those with hemophilia.

They’ve created Blood Vibrations ( a tip of the hat to Beach Boys’ Good Vibrations). It’s a website devoted to bringing musicians with bleeding disorders together to publish their songs. From the website: “Blood Vibrations is an ongoing grassroots project that collects sound and music created by people with bleeding disorders. The goal of the project is to provide a forum for creativity, expression, sharing and learning- all contributing to whole being wellness. Anyone with a bleeding disorder is welcome to participate. No musical experience is required. Record in hi-fi, lo-fi, no-fi. We encourage collaborations and group works.”

Billy and Matt facilitate all the ongoing work themselves– soliciting music/art, website, and promotion. The project is free ( no cost to share/submit and no cost to listen). They do not accept finding from outside sources– all costs are paid by these two wonderful men with hemophilia directly. 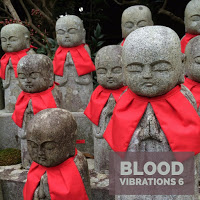 Check out Blood Vibrations, and email Billy and Matt at bloodvibrations@yahoo.com if you have an idea for a song, or one to submit to create an album.

You can also download music from the latest Blood Vibrations album, Blood Vibrations 6. You might see some talented community members you know on some of the albums, like Shelby Smoak, Kevin Finkle, Josef Zwier, and Jenny Massey.

Coincidentally, when Billy and I communicated, he was just listening to No Rest for the Wicked by Ozzy Osbourne, Zakk Wylde on lead guitar. I had just met Zakk Wylde in Utah; unbelievably great and intense guitarist! “Counterfeit God” is my favorite song of his so far.

Billy adds, “I’ve also been immersing myself since Monday in the music of Tom Petty, which was important to me as I was discovering rock ‘n’ roll as a kid.”

Listen to music, all types. It stirs memory, enriches the mind, feeds the soul. And if you can… make music. Now you can, free and easy, and with our community, at Blood Vibrations.

Laurie Kelley May 11, 2015
Our colleague Richard Atwood of North Carolina has found yet another interesting literary piece about hemophilia and…. vampires. Why not? Vampires seem to be everywhere in literature and film, and include superheroes and even Abe Lincoln!

A Love Like Blood (by Marcus Sedgwick 2014, New
York, NY: Pegasus Crime. 310 pages) is a novel labeled as crime fiction, and begins with an interesting love story and morphs into a disturbing thriller. 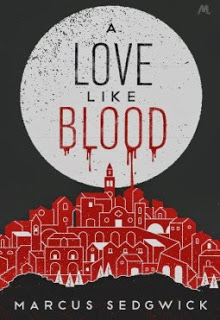 Richard writes:  In
1944, Dr. Charles Jackson, a newly qualified 25-year-old house officer at
Barts, is called up as a captain in the Royal Army Medical Corps, Field Hygiene
Section. When Paris is liberated, he visits an antiquities museum at
Saint-Germaine-en-Laye where he stumbles upon a man in a bunker drinking blood
from a woman. Stunned into inaction by either fear or curiosity, Charles merely
turns and leaves. After the war, he takes a specialism and returns to Cambridge
as a 31-year-old consultant in haematology. In 1951 while attending an
international conference in Paris to read a paper on leukemia, Charles spots
the man in the bunker dining with a beautiful woman in her early 20s. With a
bit of sleuthing, he discovers the man’s
name to be Margrave Anton Verovkin, an exiled Estonian count, and the woman to
be Marian Fisher, an American PhD student at the Sorbonne. Marian is
researching for her dissertation how blood is used in Dante’s The Divine Comedy.
Charles falls in love with Marian and invites her to visit Cambridge over
Easter. In Paris that June, Charles finds Marian to be paler and ill, and he
warns her of Verovkin being dangerous. By August, Charles is told that Marian
has returned to America for a heart operation. Charles then focuses on his
haemophilia research in Cambridge. His small research unit investigates
improved plasma products to help haemophiliacs, if not find a cure. Charles
marries Sarah, who then tragically dies. In 1961, Charles receives a letter
from Mrs. Fisher in New York stating that Marian had died in 1951 in Paris
where she is buried, and hinting that Marian had loved Charles. Following scant
clues, Charles travels to Paris to learn of Marian’s brutal murder, and then to Avignon to discover Verovkin
conducting a blood-drinking religious ceremony. Verovkin’s followers abduct and beat up Charles before the French
police send him home. Charles inquires into clinical vampirism, or blood
drinking. An invitation to visit Professor Enzio Mazzarino in Rome to discuss
his haemophilia research turns out to be a ruse, but Charles encounters an
underage prostitute. Charles returns to London to be with his dying father and
the police raid his house to find planted photographs of Charles with the
prostitute. Fired from his job and fleeing the police for paedophilia, Charles
takes his inheritance and hides in Scotland. Studying clinical vampirism,
specifically the psychologically disturbed and their relationship to blood,
Charles becomes more paranoid. He accidentally kills a private detective, who
he hired to find Verovkin, when the detective instead stalks Charles. Hiding in
London, Charles learns more of the perversions and taboos of blood. When the
newspapers report that Giovanna Scozzo, an Italian female haemophiliac, will be
treated at the Swiss Haemophilia Clinic in Lausanne due to the generosity of a
rich Swiss philanthropist, Charles, without a passport in 1964, makes his way
to Switzerland. The abducted Giovanna is the bait for Charles, who is also
abducted to Verovkin’s
chateau in Yugoslavia. Imprisoned there, Charles is forced to drink blood to
survive. By cutting off his thumb, Charles escapes his wrist shackle and burns
down the chateau. Still wanting to avenge the murder of Marian, Charles
searches three years for the scarred Verovkin, finally finding him in Italy in
1968. Charles cuts Verovkin’s
neck with a knife to kill him, eerily realizing his personal desire for blood.
“I’ve chased him for over twenty years, and across countless miles, and though often I was running, there have been many times when I could do nothing but sit and wait. Now I am only desperate for it to be finished.”
The budding
romance of a hematologist specializing in hemophilia and a beautiful woman
never reaches fruition, yet the protagonist seeks revenge for the murder of his
unfulfilled love, using his hefty inheritance to fund his obsession. The novel
lists numerous minutiae about blood. Hemophilia is not necessary for the plot,
but it adds more substance and the appropriate name for the love of blood.
Oxford is strangely attributed with the use of snake venom as a treatment of
hemophilia in 1961 (it was the 1930s), and more appropriately for the
identification of additional clotting factors at that time (pp. 99, 155). This
is the first adult novel by the prolific award-winning author of young adult
fiction.