Last Sunday, I had a nice
flight back from Union Island to Kingstown, St. Vincent, and Martin Jennett, the pilot, was so supportive of the work we do at Save One Life,  he gave me a huge
discount on the charter flight price, only $100 (compared to $160 going over). We said
our good-byes, and then I waited to board my flight to Bridgetown, Barbados. I
sat in the little airport café (for want of a better word), sweating in the humid air,
answering email and reading.  It
was a quick flight to Barbados.

I settled in at a pizza place (Chefette) at the airport to wait for
Zoraida’s arrival. In a little while, a
lady and son came up to me—Sofia! And her four-year-old Aaron, who has hemophilia. We embraced and as always,
when you meet another mom (or dad) of a child with hemophilia, it really
doesn’t matter your nationality, race, religion. We are all family.

Sofia had asked
me to come and visit, as no one from the hemophilia community has been here
before (that I know of). She is interested in starting a hemophilia society. We
got acquainted a bit and Zoraida eventually strolled out of the arrivals gate, unmistakable with her big bright pink
suitcase. We hold Aaron’s hand– he is a live wire–and go to the parking lot,
stuff the suitcases in and drive to the Marriott, not too far away. I am
nursing a very sore throat, which I think I got from the AC system at Dennis’s
Hideaway. Sofia drove us to the Marriott, and we said our goodbyes. This gave
Zoraida and I a chance to relax after a long day.
Monday February 10, 2014

We had a
leisurely morning, breakfast downstairs and then waiting for Sofia. And waited. Island
culture—island time. Things will happen when they happen!
When she arrived, we had a chat. She explained
about how she learned Aaron had hemophilia: He was 9.8 lbs at birth, seemingly
normal. At 9 months he began crying all the time, and his knee was swollen. She
took him to Dr. Inniss, her pediatrician, who sent her to the Queen Elizabeth
Hospital (QEH), the only public hospital on the island. The doctors
didn’t know what was wrong. They admitted him and did a biopsy on the knee! And
they did an x-ray but never saw a bleed. The knee was traumatized but
eventually the bleeding stopped and went down by itself.
In 2009 Sofia
went to New York for a vacation, as a relative is there. Aaron had had a
fever. As the plane was landing Aaron cried and cried, inconsolable. No one
knew but he was having a spontaneous head bleed. They took Aaron to Long Island
Jewish Hospital, a good HTC, and Dr. Richard Lipton helped determine this was a
cranial bleed. They ordered a CT scan. She said they told her, another 15
minutes and the damage might have been irreparable. Now they realized he had
hemophilia. Her cousin finally told her that her dad and both uncles had it! Aaron
stayed at LIJH for 6 months, and received factor. And there seems to be no permanent damage, thankfully.
Sofia explained how hemophilia is treated. Here in
Barbados, everyone gets free factor. But I questioned what exactly does that mean? An
unlimited supply? No. It means that the government buys a certain amount for the year, and whatever is there, you can use and don’t get
charged for. But inevitably it’s not enough and gets used quickly. Zoriada noted this is why a few patients had recently contacted us for a donation.
Sofia also mentioned Aaron’s dosage, 1700 IU for a 4 year old, three times a week. This dosage seemed excessive.
We then drove to meet with Dr. Patricia Inniss, Aaron’s pediatrician.
We waited about an hour and a half in her waiting room. It seems our day is
filled with waiting, waiting. No lunch. My throat got worse as the day went on.
It was hard to maintain a conversation as I could hardly
speak
Finally we were
let in. Dr. Innis is a lovely woman, graceful and civil. We gave her our
toddler books about hemophilia, and asked her about Aaron, and the state of hemophilia on the
island. I asked Dr. Inniss about Aaron’s prescription; why a 4 year old is be
given 1700 IU, enough for a teenager. She wasn’t sure.  So we talked about lowering his dose.
After that we
drove to meet with Ms. Maryam Hinds, director of Drug Services of Barbados. Gentle, articulate, devoted. We had a nice
chat. She showed me the drug formularies, the tender and explained how factor was procured.  According to her, they spend only enough money for 75,000 IU of factor
VIII, much less than what one American child uses in one year! But at least Barbados is buying some. Many countries that have much more money than Barbados don’t even buy factor.

No one
seems to know how many patients are on the island. I calculated 20? But one
doctor later estimated 50. This, I told Sofia, is where a patient organization can really help out, by reaching out to patients in all the “parishes,” as they call them—St. John’s, St. Andrew’s, etc.

Tuesday February 11. My voice is gone and I can only whisper now, which is unfortunate as we meet with hospital doctors today.  Today’s meetings warrant a dress, and Sofia drives us to meet the hematology staff
at the Queen Elizabeth Hospital (QEH). The hospital is your basic,
underfunded public hospital in a developing country, yet it buys factor, which is astounding. We go to hematology and
meet with Dr. Laurent, Dr. Hawkins (originally from England) and a student. Laurent accepted our donation of factor, looked into the bag,  passed over any thank you to sadly ask, “No
NovoSeven?” Which I guess shows the state of desperation here.
She painted a picture of hemophilia on the island. One patient is a fisherman, and he was forever getting cut with hooks, cleaning
knives, etc. They asked him to think about getting another job perhaps? They
also mention the “poor whites,” on the other side of the island. This raised our eyebrows as being a politically incorrect thing to say, but yes, this is a
real term used here.
The “poor whites” are  descendants of an estimated 50,000 white slaves  transported from Ireland to Barbados between 1652 and 1657. I read on line “Having succeeded in recruiting Irish men to die in the services of France,
Spain, Poland and Italy, Cromwell turned his attention to others – men and
women press-ganged by soldiers, taken to Cork and shipped to Bristol where they
were sold as slaves and transported to Barbados.” They are now called “poor
whites,” or Red Legs or Red Shanks. They live in St. John parish and no one
knows much about them except they have hemophilia among them; they tend to intermarry and not mingle with the blacks. I thought that would make for a very interesting visit my next time around.
After our meeting,  we
went with Sofia to the pharmacy and waited till her number was called. She
received quite a few boxes of FVIII. More concerning was that Aaron gets an
allergic reaction to each infusion of these. I told her that her hematologist
needs to let the manufacturer know.
We then drove a
long way round the island to visit Dr. Chris Nicholls, her hematologist. He’s a nice guy. Young,
responsive, communicative, smiling. When I carefully broached the subject of
Aaron’s dosage, he agreed that we needed to look into this. When I carefully broached the subject
of Aaron’s allergic reaction, he was also in agreement that the manufacturer needed to be
contacted. It’s great to find a doctor so agreeable and open-minded. He lamented that no medical records here are kept digitally; all records are
kept on paper! He studied in the UK and just returned not even four years ago
here. He works in the QEH but also has his own practice. We asked if he might be interested in forming a nonprofit with Sofia,
and he agreed.
Last, we drove some more to
visit a mother—Melanie. Sofia told us she runs a “shop,” and I pictured a
little boutique. Not even close; it was a roadside stand, the
kind covered with tarp that sells chips and drinks. Mel’s little son Remel fought desperately to hide from me though it was more like a
game. Nothing we did could entice him to stay still for a picture. This led to
an instant bonding which was good. We all laughed
at ourselves trying to get Remel to be still. Finally I tricked him and as he
turned the corner, caught him in a great shot. I jumped in the air and pumped my
fist, and the mom, and the neighbors sitting and watching all applauded! It was
great.

Melanie told us that she has nephews with hemophilia in Guyana. I said we knew
two brothers, Laurence and Lloyd… and she said that is them! What a small world! We’ve
been helping her nephews for a long time.  Another bonding moment.
February 12, Wednesday
evening. Sofia invited local families with hemophilia to meet us at our hotel for dinner. We were surprised at how many came,
including two in wheelchairs—Jeffrey and Leemar, who we both sent factor to recently.

There was Kole
and Kim, whose son Konnor has FIX—a handsome couple. Jeffrey, age 61, a real
hoot… great outlook and sense of humor. Ansley Marshall, with son Caiel. And Leemar, age 26, FIX with an
inhibitor, so sweet, gentle and funny! Born only a month before my son, but
a world away. He has suffered horrifically. Jeffrey is his uncle. They both
spoke about what the pain was like: four nights, no sleep. You don’t want anyone
near you. No one can do anything for you to alleviate the pain. Jeffrey said,
“And you just pray for a few seconds, just a few seconds, of no pain so you can
have some relief.” The pain comes in waves, like the ocean that pummels the beaches
on this beautiful island. Leemar’s friend who brought him was interested and
asked questions. Such bright young men. 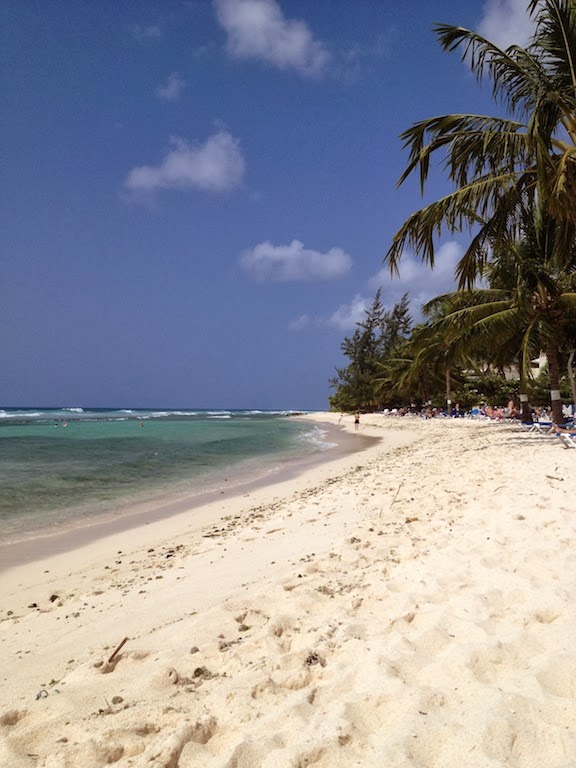 We took a photo, I paid the check for the dinner and drinks we bought
for everyone, and promised to follow up with books and materials. I gave a pep
talk about change and what they can do as patients and leaders to improve medical care and access to factor. But it wasn’t my best as my poor voice was at an end. But it was a great way to end a great trip.

The origin of the name Barbados? The name is Portuguese. The reference of the Portuguese to the island as Los Barbados (the bearded ones) is believed to describe the bearded fig trees on the island.