Laurie Kelley January 23, 2017
To live in freedom, one must grow used to a life full of agitation, change and danger. — Alexis de Tocqueville

The inauguration is over and we have a new president. The day after the inauguration, mass protests for women’s rights occurred in major cities across America.  There’s a predominant feeling of fear and uncertainty in America now, perhaps more so than with any other new president that I can ever remember. Some of it is reflective of the times we are in: wars in the Middle East, radical terrorist groups, manufacturing decline and job outsourcing, dictators with their fingers on threatening global weapons and a seeming hatred for America. Uncertainty clouds our future look at the economy, international stability, and above all for families with bleeding disorders, the fate of the Affordable Care Act.

I recall in 2008 we hit the road to present our symposia “Pulse on the Road” to several states each year, to alert our community to the coming insurance reform. In 2009 so many audiences we met with had no clue what was about to happen. Insurance caps, copays, tiers, PBMs, formularies, Medicaid changes, preauthorization—this was all new stuff. Around 2011, we noticed a marked change. Audiences were picking up all the terms and concepts. Why? They were beginning to experience the changes. Some of the changes were brilliant: no caps! You could get as much factor as you needed. No pre-existing conditions! Really, anyone with hemophilia should be able to get insurance. And limits to out-of-pocket costs. The Medicaid expansion gave people in some states eligibility. Millions of people accessed healthcare that didn’t have it before.

But the “affordable” in Affordable Care Act was always suspect to me. Who was going to pay for these changes? No annual caps and no lifetime limits meant we could get the drugs we needed, a blessing for those with chronic disorders. The parents of children with hemophilia who burned through $1 million of coverage in a few years would have had to change insurance or change jobs even. Some parents simply couldn’t do that. Now, no longer, thanks to the ACA.

But we saw that insurance companies—payers—were being hit with the skyrocketing costs as a result. Their countermove was not surprising: cost-shifting to consumers. This manifested in different ways: restriction of choice. You suddenly couldn’t get the specialty pharmacy you wanted. Next came restrictions of drugs to a formulary. You could get factor but maybe not the one you want. Higher copays—way higher. Higher premiums. The benefits that seemed so great suddenly had a consequence that bit into our disposable income while restricting access to some of the therapies we wanted.

The ACA became a double-edged sword. Payers were fighting back.


President Trump, as he pledged, on his first day on the job, issued an executive order addressing the Affordable Care Act, basically seeking repeal of it. Now, nothing can happen overnight. The administration needs heads of the departments of Health and Human Services, Treasury and the CMS Administration and IRS Commissioner to be confirmed in order to act on this executive order. This will take time.

While we wait, the best advice our Pulse on the Road team kept giving our audiences in these truly uncertain times:

1.     Read your insurance plan every year at enrollment time. So much is changing so fast, and you must know the print, and the fine print. Don’t ever assume that just because you have the same employer, same insurer and same plan, things are staying the same.
2.     Calculate annual out-of-pocket costs. You need to have a few thousand saved up just to cover rising coinsurance, copays and deductibles.
3.     Sign up for your factor manufacturer’s co-pay assistance program. They all have them, and from what the manufacturers tell me, a lot of people in the bleeding disorder community are not taking advantage of them. Big mistake!
4.     Sign up for a free factor program. You can get limited free trial doses of a different product from what you are on; or your factor manufacturer may have a compassionate program to keep you, the loyal customer, with factor until you can get insurance to cover you.
5.     Talk to your social worker at your HTC and/or your state hemophilia organization to get up-to-date information about what’s happening in your state, with your plan.

It’s going to be an uncertain time for a while, but the bleeding disorder community is one of the best medical patient communities for advocating for its needs, and for keeping informed. Sign up at www.hemophilia.org or www.hemophiliafed.org for current news about the ACA, and health care reform and repeal as it relates to bleeding disorders. 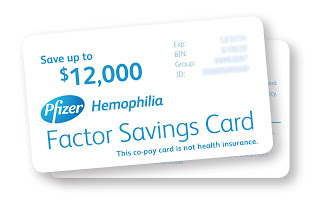 Good news if you struggle with copays and coinsurance!
In 2016, Pfizer made enhancements to the Hemophilia Factor Savings
Card Program to better align with the needs of their hemophilia patients. This
program has increased the maximum benefit for copay and coinsurance assistance
up to $12,000 for eligible patients on Pfizer Factor products.*
Eligibility
Requirements Include:

·
No financial eligibility requirements
·       Available
to privately insured patients or uninsure
(
But please see website for full terms and conditions.
Program
Website:
·       www.HemophiliaVillage.com (resources
and support)
*Terms and conditions apply. This card will
be accepted only at participating pharmacies. This card is not health
insurance. No membership fees. You will receive a total benefit of $12,000
per calendar year, or the amount of your co-pay over one year less a patient financial
responsibility of $10 per month, whichever is less.
If you have any questions about the use of this
Pfizer Factor Savings Card, please call 1-888-240-9040 or send questions to:
Pfizer Factor Savings Program, 6501 Weston Parkway, Suite 370, Cary, NC 27513.
For more information, please visit www.HemophiliaVillage.com.
The content of this post is
provided and sponsored by Pfizer.