We’ve all been told not to let our kids with hemophilia play hockey. One kid had no choice—he grew up in Rhode Island surrounded by sports lovers, and gravitated toward hockey. He excelled at it. So much so that he tried out for the US Olympics team in 1988.

Meet David Quinn, now head coach of one of the country’s best college hockey teams, the Boston University Terriers.
How can all this be? A guy with hemophilia, playing hockey?
David shared his remarkable story Saturday evening at Boston University, at a “Common Factors” event hosted by CSL Behring. In the audience were families with hemophilia B, some of whom came from as far away as New York to see David, and to attend a hockey match after the presentation.
Key to note is that David went undiagnosed most of his life, until he tried out for the Olympics. He knew he got bruised bigger and harder than his teammates; his ankles and elbows would ache. But he somehow avoided any broken bones and major contusions. That in itself is miraculous, given the brutal nature of the sport. 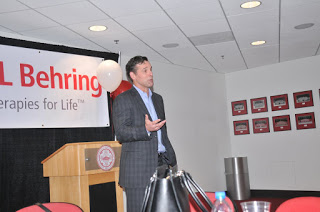 During the tryouts for the 1988 Olympics, he developed compartment syndrome, which happens when blood seeps into the fascia surrounding muscle tissue and is essentially trapped. This can result in nerve damage and even amputation. But David had excellent care, and had to wait six weeks to recover from surgery. When he healed, he was back on the ice. His doctor made him get a blood test, where they discovered he had mild hemophilia B.
Even knowing all this, he eventually was drafted professionally, in 1992 by the New York Rangers, and in 1992-3 with the Cleveland Lumberjacks. He never made it to the nationals, as he admits he had missed too much practice and training. Instead, he turned to coaching and never looked back. 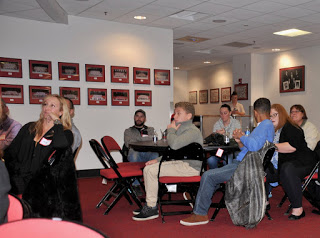 David easily engaged with the audience, was witty and warm, and his message was: find your passion, take your factor, live your life.
He has a major position now as head coach, and so with a smile and wave, he had to dash out to coach that night’s game. The families stayed a bit longer to hear Gina Perez, mother of two boys with hemophilia B, and final words from Janet Reimund of CSL Behring. 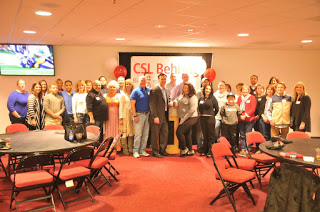 It  was a great evening of learning and motivation, and socialization. I  got to see so many friends that I rarely get to see anymore as our hemophilia meetings become more numerous and frequent. In particular Jessica Graham and Wayne Cook—hey guys! And I had actually met David 20 years ago, when I wrote an article about him for one of my children’s magazines. I can actually say I knew him way back when.
Thanks to CSL Behring for hosting this, and having it in my backyard practically.
My apologies to David but I’m not into hockey (I kind of like boxing, actually) so I skipped the game but kept the memories. Wonderful evening!