Honoring a Little Boy and a Great Man

Last week, I traveled to California, for an exclusive showing of the wonderful movie “Bombardier Blood” to employees of NuFactor, the hemophilia distribution program of FFF Enterprises. We gathered at the Omni Resort in Carlsbad, where Chris Bombardier and I marveled at the brilliant blue skies, warm sunshine and swaying palm trees. The movie was warmly received; there was a standing O before it even ended, in honor of Chris’s achievements! But the best moment for me was being able to tell employees the gratitude I have for their founder and CEO, Patrick M. Schmidt.

Patrick and I have a long history, meeting on August 12,1995, when he was attending a business meeting in Boston. He called me the previous week, out of the blue—I had no idea who he was. He said he had heard of me, saw my books, admired my work and independent stance (I was not part of an HTC, specialty pharmacy, manufacturer or nonprofit. Back then, you were one of these). He was just entering the hemophilia community, and wanted to pick my brain. So we met over a cup of “chowda” in downtown Boston. I found Patrick sincere, eager to get involved, and respectful. And he remains so to this day.

During lunch, he asked me a question that reverberates today: What can I do to make a difference?

It happened that I was still reeling from the murder the previous summer of a beautiful little 5-year-old boy. On a hot summer day in August 1994, I was leaning against my kitchen counter and opened the Boston Globe. The headlines screamed that a little boy from Easthampton, Massachusetts had been murdered. According to his stepmother, some strangers entered the house a few days before, on a quiet Saturday, smothered the child with a pillow, hit the stepmother in the head, and left the baby in the crib unharmed. Nothing was taken. There were no footprints, fingerprints and no one saw anything.

The greatest shock was that I knew this child. He had hemophilia. His grandmother, Jennie Gosselin, had been sending me photos and stories to publish in a children’s newsletter I once had, called “Factor Fun.” The headlines dominated for the week, until the stepmother was arrested for premeditated murder. She remains in prison to this day, and will be for life. The reason she killed this child? His medical bills were too expensive, and she wanted another child but couldn’t afford one.

This touched Patrick deeply. That a child would be murdered because his medical bills were too expensive was abhorrent. Also, Eric was the same age as his daughter, Natalie. I can see even now the look of horror and dismay on his face as he considered all this. Did he want to make a difference? I suggested a scholarship in Eric’s name, so that he would not be forgotten. Patrick immediately approved. The scholarship is now in its 23rd year! It has helped hundreds of students attend college.

I remained friends with Eric’s grandmother right up until she passed away two years ago. Before she moved to North Carolina, I would visit her in Easthampton and we would stop by Eric’s grave. She was forever grateful to a man she never met for his act of compassion and generosity.

If you are a US student with a bleeding disorder in your family, you can apply for the Eric Dostie Memorial Scholarship. This year’s application is closed, but mark it on your calendar for the fall, when you can apply again. And check out our scholarship page on our website, which lists even more you can apply to.

Many thanks to Patrick M. Schmidt for his friendship, mentorship and support. The movie “Bombardier Blood” showcases Chris’s climbs, but also the work we do at Save One Life. Patrick, by the way, is our number one sponsor, supporting 180 children who live in poverty. And he is our top donor. He believes in giving children a chance in life.

He has changed so many lives around the world… including mine. 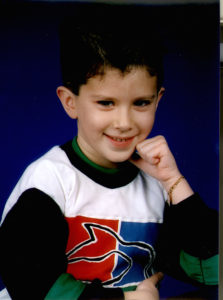 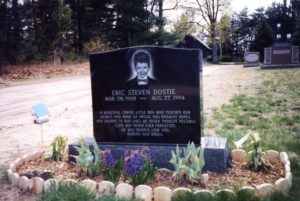