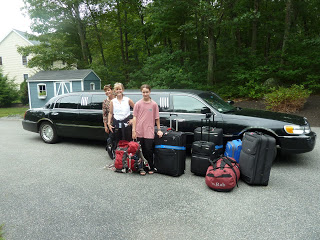 Few burdens are heavy when everyone lifts. —African proverb

I am in Kenya at last! For the first time, I am bringing a team with me. On this trip, to Kenya first, then to scale Kilimanjaro, everyone lifts!

We had a long flight: Julie Winton, a nurse with BioRx, arrived in Boston on Thursday, and I drove down to meet her and whisk her away to my home. We reviewed the gear and equipment for Kilimanjaro, and weighed our bags. Mine was 16.5 pounds; hers was 44.5. While I gloated, Julie pointed out how little I had by way to thermal/arctic clothing. She scared me into buying more. She said it was -5 degrees on Kili!

So we packed and repacked all night, and on Friday morning, we drove to EMS to buy a sleeping back liner and heavier socks. Much better!

At 3 pm our ride arrived. I was shocked to see a stretch limo–a surprise from my assistant, Zoraida. And we need it–we had six huge bags, filled to the max, and two carry-ons each, also filled.

A seven-hour flight to Paris only to face a delayed flight by 12 hours, a rented hotel room in Paris, then an 8.5 hour flight at 11 pm last night, landing us in Nairobi this morning. Julie didn’t sleep all night.

Nairobi is beautiful: the air is cool and dry, the streets clear for once. Cattle are shooed along by a barefoot boy, alongside motorbikes and cars that seemingly mocking him as they whiz by. We pull up to the Southern Sun Hotel, just last year the Holiday Inn. When I check in, the staff says, “You’ve been here before.” Two other times, in fact! I know this place well.

We relax, unpack. Later, our colleague, Maureen Miruka, founder and president of the Jose Memorial Haemophilia Society visits. While sipping tea, we discuss how we will most likely invest the up to $45,000 we have gleaned from our climbing proceeds. For that is what we are doing: investing in the future of hemophilia in Africa.

While Kenya is a model African country, the country is currently faced with an influx of refugees. Conflicts in the Horn of Africa have driven more than 1,300 refugees a day, the vast majority from embattled Somalia, into the Dadaab refugee camps in Kenya – now the world’s largest humanitarian crisis, with almost 400,000 refugees in three camps designed for 90,000. 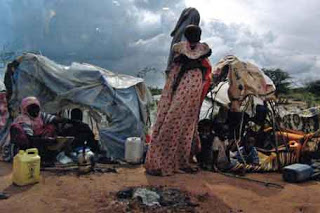 Short-term efforts by humanitarian groups include improvements including safe water and sanitation, improved security, and access to health services and emergency shelter.

For now, this doesn’t touch us. We will focus on the crisis of hemophilia. At dinner we sat around, told stories, and prepped for tomorrow, when we will go to the homes of the poor, to see how hemophilia is not just endured but survived.

I have to review this book with two hats: one as a human being and mother; the other as an editor. And it wasn’t easy in either case. Jaycee Dugan’s story has made headlines for the past two years; in 1991, at age 11, while walking to the bus stop for school, she was tasered and abducted by a married couple. For the next eighteen years, she was held in crude captivity until her rescue in 2009. She suffered years of what can only be described as sexual and psychological torture, living in a tent in the backyard, unseen by the world. She survived by learning to adapt, giving in to the perverse needs of her captors, and eventually gave birth to two daughters, the first when she was only 14 years old. Her case made headlines also as a horrific example of the failures of the legal system: Garrido was a known pedophile, and parole officers who visited the home numerous times never once looked in the back yard, where they would have seen Jaycee.

Jaycee’s memoir is honest, direct, and spares no detail. You will marvel at how a child survived such abuse; you may cry as you read this, or even stop reading it. Jaycee was never allowed to use her own name, was deprived of all books, TV and human contact other than Philip Garrido for months. Eventually, she lived vicariously through the TV and internet, and gained access to the main house, but always returned to her crude tent, where there was no plumbing or luxuries. By complying, she won favors, such as outings and even helping the Garridos run a printing business. She never, ever forgot who she was, that this was wrong, and prayed that someone would recognize her. She is filled with longing for her mother, which is perhaps the most poignant part of the book. The book is a testament not only to Jaycee’s strong spirit but to the human spirit and how, even in a child, it can triumph over the worst of circumstances. Jaycee is not filled with hate, does not feel entitled, and has moved on with her life. She is now a lady who is dignified, calm and impressive.

As an editor, I do need to point out objectively that the book is not well written. It took only a night to read, was riveting, but uneven, choppy and skips vast amounts of time in her captivity. It’s told only from her point-of-view, which is fine, but the book would have been so much better in the hands of an experienced writer who could have brought more of what was happening with efforts to find her, and her mother’s experience. The book feels like it was written by a child, and in many ways it was, as Jaycee’s education ended so abruptly in fifth grade, and she endured so much. More time was spent describing her numerous pets than her own children—these are odd things psychologically, and even endearing, but makes the book a bit frustrating to read. Still, I highly recommend it. Jaycee is a classy lady and perhaps the bravest one we can imagine, to share her experiences. I think she may have shared too soon, however; perhaps over time she can pen another, which will provide more insight from her as an adult. My rating refers to the content and my regard for the author, and less the style. Three stars.