Laurie Kelley January 8, 2018
On Wednesday,
December 6, 2017, day 11 of my 14 day trip, we met with Imran Zia. With me were Masood Fareed Malik, president
of the Lahore Chapter of the Pakistan Hemophilia Patient Welfare Society
(PHPWS) and Raul Ahmed, who has hemophilia and is our main liaison for Save One
Life in Lahore. The day was sunny and cool, perfect for visiting. Rauf and
Masood picked me up at the hotel and after only a 20-minute drive we arrived. We wiggled the
car down a narrow street that was decorated with dangling shimmering streamers celebrating
the Prophet’s birthday.
Imran is president and founder of Hemophilia Care of Pakistan, a charitable
organization that helps people with hemophilia. Why does this exist when there
is the Lahore Chapter just 20 minutes away? Good question. The World Federation
of Hemophilia does not recognize two organizations in one country, which means
HCP is not eligible for any of their resources.
I was
excited because it had been 19 years since I’ve seen Imran! I first met him in 1999, when he was just a 24-year-old with hemophilia. He was very quiet, under the tutelage of Dr. Shahla, who founded the chapter. I still have
an image in my mind of him sitting quietly behind her, as she presented
the chapter and all their work. I asked the boys around her to identify
themselves so I could know them. Who would ever have guessed that a few years
later this quiet 24-year-old with a degree in IT would start his own hemophilia
nonprofit and help so many patients? 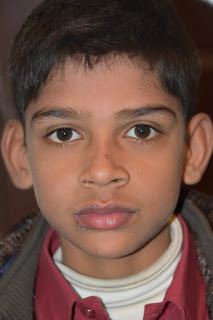