History of a Suicide

Our Heritage, and a Great Mother’s Day Gift 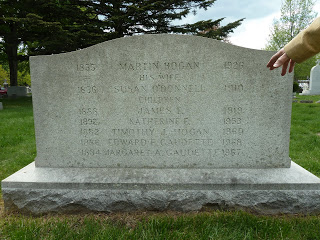 I had a lovely Mother’s Day with my three children, who accompanied me to Springfield to see my mom. After lunch, we went to the cemetery to see the grave of my Irish grandmother, who is our matriarch. There, my mother gave my three children a little family genealogy (which doesn’t include hemophilia, as apparently, we are the first!). I’m fourth generation Irish, and we have a huge clan in Massachusetts. I heard some stories I had never heard before; got to see the grave of my great-grandfather, Martin Hogan, which I never had seen before! And my children learned that I had two sisters who didn’t survive, and we visited their grave too. I took photos of the grave sites. It reminds me of how important it is to know where we came from.

In hemophilia, we are trying to do this with the movie Bad Blood, which is now being shown around the country, and with Barry Haarde’s Hemophilia Archives. Please check them out. And you can also read many books on the subject of our community’s past, starting with Blood, by Douglas Starr.

We can keep heritage alive in many ways, and one is in telling stories. I received a wonderful Mother’s day gift in the form of a story published in the Boston Globe today. Please read it (link below) to learn about our humanitarian work for children in developing countries. In it, you’ll read that on Thursday we celebrate our 10th year Anniversary for Save One Life, our nonprofit that helps children with hemophilia in poverty. We’ll be honoring my mom–who so generously is donating half our family’s inheritance to Save One Life in the form of land in Massachusetts–all we have ever owned of value–to start an endowment in my grandmother’s name: The Florence Ashe Hogan Memorial Endowment.

A wonderful way to help others and keep our heritage and family alive, through the strong mothers who founded them. 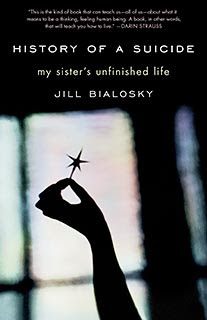 I bought this book on my Kindle after reading a glowing review in a magazine, which praised the writing as well as the handling of the topic. Not the kind of book I normally read. In a nutshell, the author’s sister, Kim, takes her life at 20, following a life of paternal abandonment, at times absentee and mostly depressed mom, dropping out of school, abortion, cocaine, romantic loss and no spiritual anchors.

Bialosky delves deeply into reasons why, and examines her own relationship with her beloved sister, and her feelings of loss, guilt and shame. The book is at its best when it simply focuses on the real story—Kim. It wanders and loses focus when Bialosky tries so hard as an author to summon literary comparisons and strength from the classics: Melville, Shakespeare, Greek tragedies, and so on. She even reprints her own poetry on her sister from an early age. Sometimes it seems Bialosky is trying too hard to be a sophisticated writer by conjuring up psychological archetypes, when she should just tell the story from her heart and not her head. She’s trying to be a Thomas More (“Care of the Soul”) without the credentials.

But she does have credentials in heartache and the book conveys these. The book is less an insight into suicide itself, despite the statistics and reports offered to substantiate the book, than the personal story of Bialosky’s sister, who was in a downward spiral from an early age. I stopped reading after two-thirds of the way through, a thing I rarely do with any book, because I felt I was reading the same thing over and over and was not learning anything new. The book rambles, is a bit uneven, loses new insight, and tries awfully hard to be highbrow. But Kim’s story is deeply compelling. Two stars.