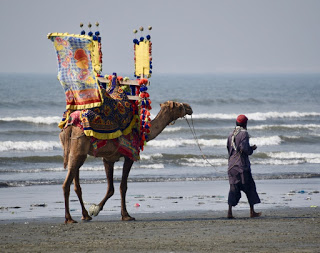 After ten long years, I am returning to the second developing country I ever visited for hemophilia, and one I feel very close to–Pakistan. Just as I landed in Dubai, after a 12 hours flight, there were reports of protest throughout the country. It was serious: Facebook was even shut down for the first time in its history there. My Pakistani partners wondered if I should continue, as the airport road in Karachi had been closed, but  after a flurry of emails, we all agreed I should continue.
I was pulled out of a long customs line by Asghar Ali, who works at the airport and has a son Rana, with hemophilia. As he put me on the fast track,  I was through in no time. My friends hematologist Dr. Tahir Shamsi and Mr. Alam Zaidi, who has a son with hemophilia, were there to greet me in the
cool early morning air—it was 6 am. I was staying with the Shamsi family, and it was so nice to be back in their home, after 10 long years. 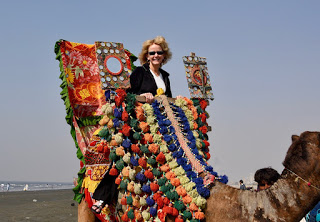 After a rest, we all headed to the beach with the whole family–kids, wives and one grandchild!. It was fun! I’ve been here twice before on previous trips, once including the Shamsi family in 2007. It was hot and sultry. Camels waited for riders, decorated with colorful reins and enormous saddles with frames; horses, which I never saw before, stamped impatiently in the sand.
I mounted a white horse, which was compact and wiry. The owners walked them up the beach, then asked in sign language if I wanted to ride it by myself. I wasn’t really sure; was the saddle tight enough? The stirrups the right height? 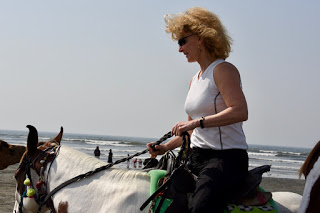 I finally said ok, and the man just said “Urdu,” motioning to the horse. What—the horse only understood their language Urdu? Then he slapped it on the flank and off we went! It was
glorious! Galloping on this small horse on a beach at the Arabian Sea!
Next—camel ride! I loved how it stands knees first. That was a relaxing ride, though it lurches  and then sometimes trots to catch up to the guide. I was a bit sunburned but what a great way to enter back in Pakistani culture and this nice family.
Monday November 27, 2017 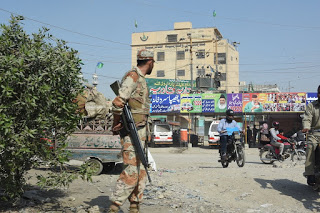 Pakistan is the sixth most populous country in the world, but ranks 149th among 188 counties according to the UN, in sustainable healthcare-related goals. Keep that in mind as you read how a dedicated group of patients and their healthcare providers are trying to save their people with bleeding disorders and revolutionize care in this fascinating and ancient country.
Today I visited the Husaini Blood Bank, one of the very first stops when I first visited this country in 1999. Then, everything was so exotic and different, so strange. Pakistan was rather insulated from the world, prior to the US Iraq invasion of 2003. In 2007 I saw much US military presence. On this trip, none at all.
Alam Zaidi picked me up at Tahir’s house; as he got out of the car, the back two doors opened and out stepped two beautiful young people: daughter Fatmid, and son Abbas, both of whom I had met when they were children. Abbas, a teacher, is a handsome young man with hemophilia, dressed in a tailored suit, tall. Fatmid is lovely—a journalist.
The blood bank was not far, but what a far cry from my first visit! This was a new building, sparkling clean, modern and welcoming. Everything gleamed: chrome, glass and marble. The spry Dr. Jafry is ageless, and is still there as head of the Karachi branch. I met his team and we took a tour through the center. Blood banking is my weakest area, but I can appreciate the new equipment and that they now have hepatitis testing that reduces the waiting period from 70 days to 7 days! This means less chance of spreading the virus.The very first patients I met were two young men with hemophilia, receiving donated Eloctate from Bioverativ.
At last we met with the Save One Life children: 24 out of the 25 Save One Life beneficiaries we have registered there! A magician was performing so I sat on the sidelines and watched his slight-of-hand. He pulled a red ball out of thin air, made a wallet catch on fire, did rope tricks. The kids, big and small, loved it! Soon we started the ceremonies, as a small boy recited opening prayers from the Koran. The Karachi chapter did the introductions, and everyone made speeches. It was so kind that they showed photos from my 1999 and 2007 visit.
I met Mubashir, the factor 1 deficient boy I met in 2007, as two-year-old, and now 13! He speaks English and is so polite. I had factor FXIII medicine for them after the program.
The program was nice, covering the achievements of the Hemophilia Welfare Society Karachi, what Save One Life has done to help. Lots of photos ensued and then the kids were all given pizzas for lunch, while we met with the team and had our own lunch.
After this Alam and I drove to the Hemophilia Welfare Society Karachi,

the NMO chapter. It’s small, but holds one fridge that contained some cryo, and the Biovertiv donation (see our article in PEN August 2017). Unfortunately, with the Biovertaiv donation, and the increase in infusions, have come inhibitors. Most are transient, thankfully. There are an estimate 4,000 with bleeding disorders in the Sindh province with only 460 identified and registered at this chapter.
Several of the staff were present. Raheel Khan is a phlebotomist with hemophilia, and works at Husaini. They actually have four paid staff, unusual for most
hemophilia nonprofits in developing countries. Jawwad Shadid enters the data and gave me a demo; he has hemophilia. They have meticulous bookkeeping, and an excellent patient registry.  I was most impressed! I saw this chapter back in 1999, and they have really progressed far, thanks from help from
the WFH and Novo Nordisk Haemophilia Foundation. The donations from Bioverativ
required all chapters here to up their game, get more organized and transparent
and have standards of factor storage and distribution. Finally, we headed back to the Shamsi residence for the evening.
Tuesday November 28, 2017
Today Alam picked me up at 9:30 am, and we went to the Indus Hospital, and later, the institute that Dr. Tahir Shamsi founded, the National Institute for Blood Diseases (NIBD).
The Indus Hospital is breathtaking in size and scope. As we pulled into the grounds, a huge number of people waited in the chilly morning air. It was founded only 10 years ago, as a 150 bed hospital, dedicated to providing free care to anyone, regardless of class or gender. It’s growth has been explosive. It is now serving millions of patients for every type of medical problem. There are now eight hospitals in 5 cities. Care is absolutely free, so much so that this is a cashless hospital. True— no money ever exchanges
hands. Indus Hospital shows what is truly possible when one dreams big enough and has faith. This is also Pakistan’s first
paperless hospital! Imagine! I was so stunned and impressed, I began thinking what I can do at my level to improve my services. 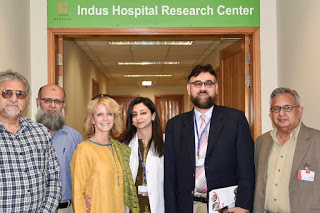 I met with the CEO Dr. Abdul Bari Khan, a gentle giant of a man, who despite his enormous achievements, is very humble and deflects praise. With us were some of his team, Dr. Izza and Dr. Chinoy (who was a classmate of my host, Dr. Shamsi). “You know Dr. Shamsi?” Dr. Chinoy asked me, amazed. “Yes! I’m wearing his wife’s clothes!” and we all had a good laugh. We instantly bonded and I learned more about how people with hemophilia can come here for free care.
Dr. Bari heard my story, and then shared that we both had a common inspiration point: me, with the birth of my son in 1987, and he in 1987 as well, when he first
conceived the idea for such a hospital.
After our meeting I met a lovely elder man with VWD, who is in need of factor. He has had a bone that leaks pus constantly despite multiple operations. I’ll follow up with staff to learn more if Project SHARE can help. Despite all the help and dedicated physicians, Pakistan still faces so many restrictions and limitations medically.
After our

tour here, we drove in the crazy, no-lane-awareness of Karachi traffic. It’s like being flushed through a convoluted traffic pipe as we dodge auto-rickshaws, donkey carts, hundreds of motorbikes, cars and trucks, horns blasting, all with some sort of preternatural grace. I never once saw a car get so much as scratched and yet car and motorbike come within mere inches of
hitting constantly. I long since lost my reflex to slam my foot on the floor or grab the dash. You just go with it! 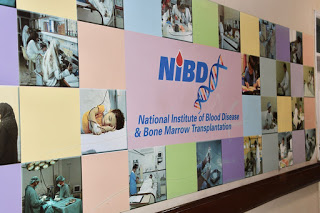 The NIBD  (National Institute of Blood
Disease & Bone Marrow Transplantation ) was founded by my friend Dr. Tahir Shamsi. It’s an 80 bed hospital in the heart of Karachi. It specialized in hematology, bone marrow transplantation and surgical specialties. It’s the only tertiary care and teaching institute in the country exclusively dedicated to provide comprehensive diagnosis and management of patients suffering from blood disorders. In fact, Tahir pioneered BMT in Pakistan and NIBD has performed more than 700 BMT. I can say I truly know some of the best people in medicine in the world!

I can also say that I was present back in 2001 I think, when Tahir shared this dream with me: to create such a hospital. I had invited him to a medical symposium my company funded in Nepal, as a guest speaker. After the program, we sat in the lobby of the hotel, having tea, on the floor (why, I forget!) and he grabbed a napkin and sketched out a logo and an idea. I so wish I had that napkin today, because I saw vision in action. A dream became a vision which became a goal which gave birth to a strategy. The vision compelled others to help, and Tahir was on his way. Today I entered this institute, amazed at the number of patients,
the 400 staff, the multiple floors, the progress, the research, the teaching.

I had the honor to meet three of Tahir’s interns, all hematologists, who want to one day go back to their home cities, and start hemophilia care there, particularly in Balochistan, where patients are largely unidentified. We chatted about steps to ensure this happens, and of course, how to make a dream come true! The men were a bit reserved but as we got talking, because more animated and spoke with more conviction. It was exciting to witness! I want to help them see this through, because their passion should be fed like a flame, and not allowed to die for lack of nurturing. 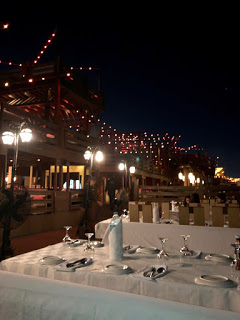 When the tour was over, around 5:30, I looked forward to going back and relaxing. But
no such thing! After picking up Tahir’s sweet mother—I adore her—we headed with
the entire family to Kolachi, a breathtaking wooden framed restaurant on the Arabian Sea. It was lit up with strings of white lights, draped like the scarves the women wear here, around the neck of the roof. Sea doves flitted across the top of the water, temporarily hitting the refection of the lights, making them glow for a moment. Roti, spinach and all sorts of things. I’m not a foodie, so I can’t report on anything I ate other than Pakistani food is
excellent!
Please read Pakistan Part 2 in two weeks! 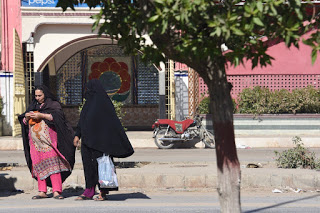