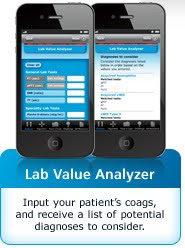 Here is the latest in very cool applications for the iPhone. I don’t think I have yet seen one that helps in the diagnosis; I believe this is the first. This is from Novo Nordisk. This app does hematologic testing, including prothrombin time (PT) and activated partial thromboplastin time (aPTT) tests. This resource has been developed to help you diagnose coagulation disorders. Here, you have access to the following features:

Lab Value Analyzer: Input the patient’s coags, and the clinician receives a list of possible diagnoses
Diagnostic Algorithm: this walks a clinician through step by step to narrow the possibilities of the diagnosis
Acquired Hemophilia

Check it out at http://www.coagsuncomplicated.com/Home.aspx 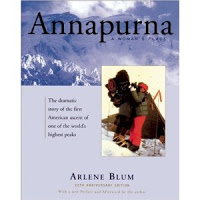 Annapurna is the 10th highest peak, and renowned for avalanches. It takes extreme mental toughness and physical endurance. Of the 4 successful ascents of Annapurna only 2 men had reached the top each time. Arlene Blum became the first woman to ever summit it, and led an all woman team. She was met with skepticism and ridicule, and also great enthusiasm. This book details the preparation and the journey, and her struggles as a leader. It’s a great book about leadership. I had my own doubts reading it, as Arlene seems so insecure. But she is candid, and in the end, her leadership really shines. “My scientific training contributes to a natural tendency to see all sides of an issue. I tend to agonize about the full range of possibilities, and even after I’ve made a decision, to worry interminably about whether it was the right one.” Sadly, two women climbers on the team died when they chose to strike out on their own, against the wishes of the others to summit after Arlene.

Arlene Blum has played a groundbreaking role in US women’s mountaineering. She led the first women’s team up Mt. McKinley; was the first American woman to attempt Mt. Everest; and has played a leading role in more than 20 mountain expeditions worldwide. Three stars.