This Time for Africa! 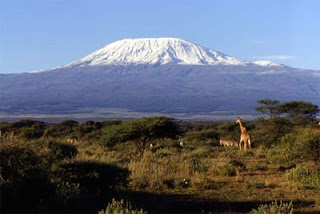 One month from today I will be in Africa, about to reach new heights, literally. I’m planning a huge mountain climb, up Mt. Kilimanjaro, the largest mountain in Africa and largest freestanding mountain in the world. At 19,340 feet, it’s colossal. We will start at tropical temperatures, and gradually progress up to Arctic temperatures, below freezing. It will take us six days: five up and one down!

Who are we? The nine other climbers are: my 17-year-old daughter Mary; Eric Hill and son Alex; Neil Herson and daughters Britney and Kelly; Jeff Salantai, who has hemophilia, and Julie Winton, a nurse with a son with VWD. Jeff and I just met for the first time last week in San Antonio! He was the first person with hemophilia to climb Mt. Ranier last year!

Our goal is to raise money for Save One Life and its Africa programs. Save One Life is the child sponsorship program for impoverished children with bleeding disorders in developing countries. I’ve been traveling to Africa since 1999, and was the first person from our international community to travel to Kenya, Ghana and Tanzania. I’ve also been to Zimbabwe four times and hope to return again soon. We started outreach programs in Tanzania and Zimbabwe to help locate more patients. We also want to start a scholarship program for college age men in Kenya. They are all so lacking in funds, and it doesn’t take much to get them an education. Once they are educated, they have a chance at a better life.

Eric is a sponsor of two children through Save One Life Neil is one of our biggest sponsors at 49 children! Obviously they are deeply committed to our cause.

They must be to tackle Kilimanjaro. Long the focus of lore and legend, Kili is very special. And tough. While not a technical climb, meaning there will be no ropes or climbing gear, it is strenuous. The biggest worry is altitude sickness: migraine headaches that lead to vomiting and lack of appetite. Oxygen levels will be at 50% of sea level.

But I have hope. Chris Bombardier, a young man from Colorado, just returned from Kenya and I think is the very first American with hemophilia to summit Kili! His climb also raised money for Save One Life.

If you’d like to sponsor a climber, please go to our donation page. Please note that 100% of your donation goes to Save One Life and its African programs, and not to cover the costs of the climb, or airfare or anything related to the trip. Each climber pays for his or her own expenses. All funds raised are donated to Save One Life. It’s a huge commitment in terms of time, energy, and money for these climbers. Please give them motivation and support by pledging today!

Interesting Book I Just Read
Break on Through: The Life and Death of Jim Morrison by James Riordan and Jerry Prochnicky 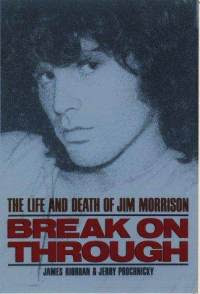 Shaman or madman? Forty year ago today Jim Morrison died of “heart failure” in a bathtub in Paris, of a suspected overdose. His death is being honored around the world by tens of thousands who loved his music and somehow identified with this tortured poet-turned-rock star. It’s hard to see the poet when you read the account here which can make you wince: the drinking, the juvenile antics, destruction of property and disregard for the rights of others, including his own band mates who suffered six long years with their front man. Gifted with a gorgeous voice and even better looks, Morrison relished the role of star, but also sought solitude personally, and respect for his poetry. “The Lizard King” brought the Doors fame and a legacy in rock and roll history, but as much for pushing the envelope as for his lyrics. His on stage antics made him the first rock star to be arrested on stage; he had 20 paternity suits pending at the time of his death; he was banned forever in Phoenix. Now his antics look tame, but in the 60s, this was all new, and dangerous. Morrison took rock where it had never gone before.

Riordan was a Rolling Stone contributor, and interviewed Morrison. But the writing is choppy, perhaps reflecting two different authors’ styles, and references to current events—Vietnam, Charles Manson, Apollo 11—are stuck in the middle of the story, often without a connection, or when there is a connection, it’s contrived. Some of the statements are just ridiculous (No matter how he tried to avoid it, legal trouble followed Morrison [as though he were an innocent bystander] and then in the next paragraph, they relate how he was arrested by the FBI and held in jail for disturbing the staff and passengers on a commercial plane ride). The attempt to view Morrison as a shaman is a bit too serious, verging on hero-worship. Much of the material here seems to be pinched from other sources, though sources are often not cited. So this is not a well written or researched book, certainly not as good as No One Here Gets Out Alive. I prefer drummer John Densmore’s Riders on the Storm the best, for its candid and sympathetic view of a man, Jim Morrison, who vented his deep-seated angers at his audiences, and muted his insecurities through alcohol. What a waste: judging from the Celebrations of the Lizard today, he is still cherished as a star, marveled at for being truly innovative, and listened to with pleasure. He appalled and attracted. The world is ever fascinated by him. Morrison has influenced many rock stars since his brief life ended. And members of the Doors are still touring, as much as ever (I almost went to see Ray Manzarek when he was in Massachusetts in May–so sorry I missed it!) He always said he would be a comet: a brilliant flash, here for a short while, but leaving a lasting impression. How true! RIP, Lizard King. Two stars.

Just last week I blogged about CSL Behring’s new factor XIII concentrate Corifact. Now I’ve learned that Novo Nordisk announced that a Biologic License Application (BLA) has been submitted to the US Food and Drug Administration (FDA) requesting the approval of a recombinant factor XIII compound for those with congenital Factor XIII (FXIII) deficiency.

Corifact is made from human blood plasma. This new drug is made from recombinant technology, which uses genetic engineering.

Factor XIII deficiency has a prevalence of one case per two million people, with an estimated 600 diagnosed patients worldwide, making it one of the rarest bleeding disorders.

A press release from Novo Nordisk states: “Positive results from a phase III trial examining the efficacy and safety of recombinant factor XIII for the prevention of bleeds associated with congenital FXIII deficiency showed that when compared to a historic control group of individuals who did not receive routine FXIII infusions, preventive treatment with monthly recombinant FXIII injections significantly decreased the number of bleeding episodes requiring treatment. These data were presented at the American Society of Haematology (ASH) meeting in December 2010, and marked the first completed phase III study conducted to study the use of a recombinant FXIII treatment to prevent bleeding episodes in congenital FXIII deficiency patients.”

It’s all great news for those who have factor XIII deficiency, and with the sad news from around the world, especially Japan, we need good news.

No One Here Gets Out Alive
Jerry Hopkins and Danny Sugerman

I’m continuing my reading streak on The Doors, the 1960s band that took America by storm. In this book, Jerry Hopkins (Rolling Stone) and Danny Sugerman (then teen office boy for Doors) profile the madness and magnificence of Jim Morrison, front man and silky-voice singer, whose depravity and self-destruction eventually upstaged the music itself and his three talented band members. The book details Morrison’s schizophrenic adolescence in which he, with an IQ of 150, devoured sophisticated philosophy and poetry books, and wrote poetry himself, but yet immaturely and cruelly harassed his younger brother, scared the elderly and openly mocked cripples. The first few chapters alone might end any hero worship of The Lizard King. The book recounts chronologically how the Doors formed, their skyrocketing rise to fame, and the toll of fame on the unstable Morrison. They were only 21-23 years old, in a music industry and culture awash in drugs, but why did only Morrison succumb to the pressure? The book is insightful into the music industry of the 1960s. It’s incomplete in that no other character is truly explored: Manzarek, Densmore and Krieger are barely mentioned. They were together for six intense years: how did they cope with Morrison’s descent into madness? The book also sheds little insight into Morrison’s state of mind, or why he acts as he does other than the drugs or alcohol, but factually states a portrait of a seeming sociopath: the dozens of paternity suits, his wanting his child to be aborted because he simply didn’t want one, his cruelty to his mother when he performed, his promiscuity and debauchery.

It’s hard to reconcile the deep thinker with the raging drunk. Perhaps the book doesn’t go deep enough into Morrison’s psyche, but then, Morrison didn’t seem to let anyone in. He internalizes his pain, which seeps out in frightening rages, and then is dampened by alcohol. One only needs to look at his photo progression in just six years: from sleek, sexy rock star to bloated, bearded drunk. I don’t think the pain was from being a frustrated poet or even a rock star; that’s putting the cart before the horse. His pain was chronic, malignant. Poetry was one expression; rage and cruelty was another. Adoration from the masses was one treatment; alcohol, maybe heroin, was another, and became the final exit.

Morrison helped put the Doors on the map, and he destroyed the Doors by destroying himself. Forty years later, it seems we will never know what drove Morrison to the edge, and then over. The authors skim over any analysis by comparing his angst to being like the Greek god Dionysus, or part of the Beat generation, or expressing himself like the Indian shamans he revered. But this is shallow. Looking back today, Morrison was an emotionally disturbed artist who sought to medicate his pain through alcohol, and expressed himself through rage. Incredibly, he left a legacy of beautiful, mystical music that captured a unique time in America, and the black hole of his inner life. And we are drawn to such people, scared of them, and yet worship them. Despite the incomplete picture the book paints, it was a great read and I could not put it down. Three stars.