Calcutta: Scholars Amid the Squalor

Have you seen the movie “The Life of Pi”? A phenomenal achievement in cinematography that happen also to be a stunning story about life. It starts off with a boy named Pi from Pondicherry, where I am now. I’ve been in India for almost two weeks, hitting six cities, visiting treatment centers and most of all, visiting some of the families and patients enrolled in Save One Life, which numbers about 600 in India! I’ll get to Pondicherry next week—first, I want to fill in what’s happened since Mumbai.

In last week’s blog, I detailed the hemophilia camp (Camp HemoSOL) in Mumbai. After camp, Usha Parthasarathy, of Chennai, a mother of an adult some with hemophilia, and former VP Development of Hemophilia Federation (India), the national organization, and one of the founders of the Chennai chapter, and I flew to Kolkata (Calcutta), on the east coast, arriving late Sunday night. We awoke Monday morning, November 11, to the Muslim muezzins calling the faithful at 5 am on loudspeakers, and then hearing the rhythmic thwunk, thwunk of bed sheets and towels being slapped across rocks by workers at the massive green pool that stretches below our hotel window. The sheets are hung to dry like stiff, grey banners. I’m not sure what beating them against rocks does. My sheets and towels still don’t look too bright or white.

Our morning and early afternoon was spent at the new treatment center, a gift from a wealthy patron. It’s stunningly clean, an anomaly in Kolkata, a city besieged with people, cars, and mountains of trash; we meet with many patients. One is a teen with a bandage on his head; his expression is a bit wary. I later learn he is the same boy, age 6, I met back in 2001 when I first visited. He was then an orphan, and the center was raising him. He lived there! Now he is with relatives and looks good. Another boy, sweet faced and gentle, with his mother. 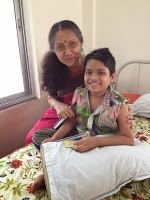 Another, a jolly-faced, round boy, who had been sleeping but they woke him. He smiled deliriously while we snapped photos. Finally another teen whose home I had visited in 2005; I never forget these faces and I’m amazed that he’s here on the one day I visit eight years later.

We asked questions about their treatment (mostly cryo and plasma!), passed out toothbrushes we were given by the families of North Carolina (and the Hemophilia Foundation of North Carolina’s Christmas party last year) and puzzles. We met with an older man, 64, with a psoas or hip bleed. He was there with his 16-year-old son who spoke English. The Indian patients are all so nice, patient, polite. Unfailingly polite. Eventually we get to the Save One Life scholarship recipients. These are young men who qualify for a grant of money to help defray the cost of college.

One boy, Sajid, really caught our eye. His parents have died, and he was short money for the education. He qualified for a scholarship from us, but was still $40 short for tuition. That’s a lot of money in a city like Kolkata. At age 21, he raised his own money by tutoring other students. And he was living on his own. We replaced that money that same day, telling him how proud we were of him; Usha had tears in her eyes hearing his story. This experience made me realize what a difference we were making in these boys lives.

After the visits with the boys, we took photos; the boys all seemed genuinely happy to see me, and hung around a while to snap photos. I figured they might be dying to get going home. Then Usha and I, along with members of the Kolkata Hemophilia Society, including Ravi Ojha and his son Siddhartha, drove to a restaurant, and had a late lunch. I am not eating much on this trip and my wristwatch now keeps sliding about my wrist as I lose weight. (My girlfriends all want to come with me on a trip when they see how I always lose weight!) The food was very good: roti, chepati, and my favorite— masala tea. After this, we went to visit a beneficiary in his home. Ashish is sponsored by BioRx’s president, Eric Hill, one of many he sponsors with us.

It was not a long car ride, but we shoulder our way through the clogged city streets, and went to the poorer section of Kolkata, though almost all of it seems so poor. Still, this is a fascinating city. Yellow cabs dash about madly alongside ancient rickshaws pulled by white-haired, iron-muscled old men. Lights are string up deliriously here, celebrating the festival of lights, Diwali. So it was nice to drive about at night, breathing in air that was at once cool but gritty, fringed by multi-colored lights, guided by flickering lamps lit at passing Hindu temples, and finally arriving at an alley where Ashish lives. He was waiting at the beginning of the alley, where sweet shop sat, guarded by a generic third-world yellow dog, complete with the mandatory curly tail, eating some crackers.

We were happy to see Ashish, and set off in the dark down the alley, a short walk to his house, with him leading the way. House is misleading; it’s only a 12 by 12 room, big enough for one king size mattress and one cabinet—that’s it. The family sleeps on the bed and on the cold and moist concrete floor. Ashish is adorable, with such personality and expressive face. He wrote a letter to Eric, in English! Then cut a little video for me. I loved this kid at once. His family was sweet and slightly embarrassed to have foreign visitors. The father was not present, but the mother was, and didn’t quite know what to do with herself. The children had no such problem; they giggled, mugged for my camera, and wriggled on the bed in excitement.

After a long day with too little sleep, I often feel like I want to skip the family visits, which invariably happen during the mosquito-driven night, in grimy places and dark environs. But I never regret going. It means the world to them—a visit from an American lady! And I brought stuffed animals which made them happy. We spilled out into the dark alley after the visit, and headed back to the car, with many waves and good byes.

Back at our hotel, Usha and I skipped dinner, once again, and snacked on the raw almonds I brought from Boston. I compile notes, process photos and turn in. Tomorrow we head for Durgapur, named after the goddess Durga, who brings success and wealth. Maybe for a lucky few; our hemophilia families do not know such luck, unless it’s knowing they have a hemophilia
chapter, some donated factor, and Save One Life. (Next week: Durgapur,
Bhubaneswar and Pondicherry)