Fiji: Never Give Up!

Laurie Kelley March 25, 2018
Saturday, February 17, was the first hemophilia workshop ever in Fiji!  We could not have done this without the dedicated help of Dr. Bijend Ram, director of Community Medicine & Public Health, Suva Bayview Medical, Randall Curtis (US), Dr. Julia Phillips, hematologist from New Zealand, and our local new leader, Kunaal Prasad, who worked so hard to pull everything together and bringing everyone together for the first time. 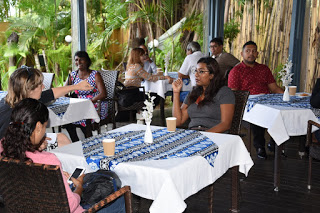 We had a great turnout. About 50 medical people showed up from all over the island of Viti Levu. I welcomed everyone with “Bula!”, introduced our speakers, including Dr. Ram and Kunaal. Dr. Julia presented “Haemophilia 101,” and even had a discussion about bleeds, when little Shahil showed off his bruises.

A buffet lunch was served (the food in Fiji is excellent), and our attendees were friendly and informal. The sun was scorching hot. Back inside our small, air-conditioned room, we continued. I gave my talk on Project SHARE, and then explained the WFH and NNHF. My main message was to leave hope with them. There is a worldwide community waiting to help Fiji but first FIji must organize, and help itself.

Randy spoke about the necessity of a national registry, and then, funny and disarming, also gave a demonstration of an infusion! Everyone crowded to watch. Finally we concluded with a patient discussion, which was the best part of all.  It was the first time the families with hemophilia in Fiji had ever shared together their experiences, and feelings. First the young men spoke.
Niraj went first. We had just visited him in the CWM hospital in Suva, the capital, two days before. He shared his 10-day experience there, in which he had to find blood donors to replace the bags of FFP and cryo he used up. “It was hard to find a donor,” he said. Kunaal had really rescued him by bringing the factor we donated. After his shot of factor yesterday, he went home at last!
Then Deeptesh took the microphone. “My childhood was not fun. I didn’t do any sports; I was a spectator. I always got treated with cryo; and I had to supply the rare blood type group [to replenish what I used]. I had to find donors. Once, I used 50 units of cryo and had to find donors! I pleaded on the radio for donors. I used to say, ‘Why me?’ but now I realize there are those worse off. My school life? I quit form 6 and stayed home for one year, then returned. Maybe one day my life will be totally different.”
Next, Sanjeev spoke. Cousin to Kunaal, he shared, “I was diagnosed at seven months.” Growing up was difficult. “For me, I had to be in the hospital sometimes two times a month for severe joint bleeding in the elbows and knees. I missed out on nine years of education. In 2010, I hurt my left knee, and couldn’t walk for three years. I had severe swelling in the left knee. I did exercises, and started walking again, and returned to school. It’s really important to never lose hope. There is always hope. I’m really glad we are getting this help for a better life. The pain is excruciating. There was a time when I thought everything was over for me—over. Don’t let hemophilia be a barrier to your education.”
Then came the father of two year old Suhal. As he took the mic, he immediately choked up. With tears in his eyes, he shared: “My son was hit in the head and we took him to the hospital…” Now the father was crying; a very uncomfortable moment in this stoic community. “It was hard to believe he might be without us tomorrow… we only have one son! We are concerned about him. After one to two years, we took him to the hospital for two weeks at a time, sometimes. He missed school sometimes for one month. We were losing hope for him.” Now, Suhal’s mother started wiping her eyes. “We want a better life for him,” she wept. Kunaal told the parents there was a donor overseas. “If our foundation is created, the donor can help him get factor and an education!” Kunaal was fast becoming our beacon of hope to everyone.
Sanjeev added, “The problem we face at the hospital is that we are told to go home! They won’t listen or believe us. It’s hard to explain how painful that is. The factor being provided is really helpful and we are really grateful.”
Kunaal then shared his thoughts. “First, deformities and disabilities—there are a number of patients who have constricted joints. Mt right knee is deformed. I was on crutches for 10 years. It’s really painful. You cannot imagine…” All of us listened in rapt silence, perhaps feeling guilty for our good health while all these young, beautiful men spoke of unrelenting pain.

“Second, factor is a new thing,” he added. “I appeal to you doctors: if a hemophilia patient comes to you, don’t go with the APPT results. That doesn’t tell you if he has a bleed!” Imagine, the 23-year-old was lecturing the hematologists about diagnosing! I loved it. “The APPT has been ruining things! It dictates whether we need treatment. Put it aside. Focus on the pain level.”
Lastly, he stressed that hemophilia patients were intelligent and could put their minds to anything. “I always wanted to be a doctor,” he confessed. “I need to get my high school done. Some of us are losing hope because we think we can never do things. But never give up. Age isn’t a barrier! Move forward, focus on your dreams. Lean on one another for support.”
Then the group addressed depression, a silent epidemic among them all. “Everyone has this in common,” expressed Kuunal.  “When your dream is falling apart, people get depressed. Some have tried to end their lives. I was depressed myself. Education means everything to me. I was suicidal for so long. I have hints to the medical students who treated me. I gave hints, but people are not open about how they feel in Fiji.”
Kunaal’s mother started crying. “Our first son was diagnosed one month after he was born, in 1986,” she said, wiping her tears. She shared how difficult it was to get treatment. They had to travel back and forth to Lautoka, a 40 minute drive each way, which cost the family $50 each way; the father, Jack, only earns $70 a week!  “He had a tooth extracted and his nose was bleeding, too, and he died.”
She felt the doctors neglected him. Her pain was difficult to see. Kunaal eventually stood, and silently left the room, tears in his eyes, unable to bear to see his mother in so much pain. Kindly, Niraj went out with him to comfort him.
The mother continued. “He was moving about in pain so much, the doctors tied him to the bed and left him. He passed away at 7 pm.” This may have been the first time she had ever shared this in public.
When they started taking Kunaal, their second son, to the doctors, the medical team took the parents more seriously. Once when Kunaal was receiving cryo, Jack told the doctors to wait in the room, as Kunaal might have a reaction. This was a bold move for Jack; most parents do what the doctor tell them, but the Prasad family found its voice. Sure enough, Kunaal had a reaction and needed medical attention. The family praised Dr. Naryaan, who happened to be in the audience, as a physician who truly listed to the family’s concerns.
The hospital expenses led the family to avoid going for treatments.
Kunaal stated that for the first time in two years he is walking, thanks to factor donated from Project SHARE. And he is a lot happier. He has plans to return to school, now that he has factor. And eventually get that medical degree.

All the sharing encouraged the other parents. Shahil’s mother recalled she always wanted a son. She prayed for a son. And then she had one. For the first few years there was no problem. Then he hit his head on a wall and his head swelled. They took him to Lautoka Hospital, where the tests said there was nothing wrong. When she told the doctor her nephew had hemophilia, then the doctor listened to her. She waited two years until they finally got the results that he had hemophilia. Shahil is 8 now, and doing very well.

By 4 pm we were done, and the workshop ended. We thanked everyone, Kunaal especially, for such an incredible day. Fiji’s first medical workshop!
It was an emotionally charged day. We changed into comfortable clothes and then went for a drive to Port Denerau for shopping and dinner. Randy, Julia, Kunaal and I browsed shops that had cannibal forks (for eating brains! Part of Fiji’s tribal past. I bought one) and then ate dinner by the sea, and had wonderful seafood. It was lovely; sun setting, yachts, fun conversation and that wonderful feeling that we did some good today, and everything happened well and according to plan. After dinner, we went into the Hard Rock Café, where I bought Kunaal a sharp looking Hard Rock Café shirt. We strolled back to the hotel, and went to bed early. Another big day tomorrow in Fiji—the start of a new national organization, the Fiji Haemophilia Foundation (which we successfully created!). But that’s a story for another time.

Moce Ni sa Moce, Fiji!! Thank you for all your gifts to us.